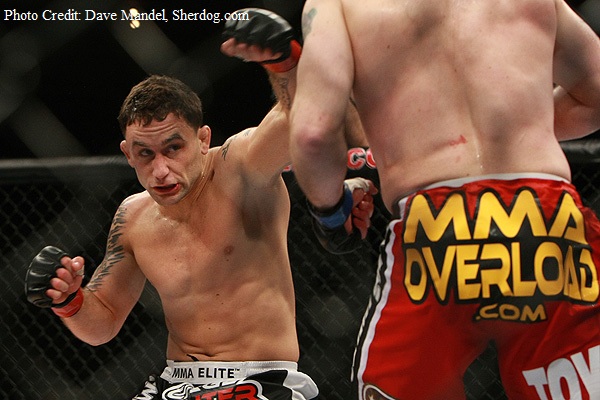 Background:
Frankie Edgar is currently the reining UFC lightweight champion. Edgar known for his toughness and durability, began his mixed martial arts career in 2005 following a successful collegiate wrestling stint at Clarion University. Edgar quickly built a 5-0 record on the independent circuit, defeating future UFC contender Jim Miller and WEC veteran Deividas Taurosevicius. Edgar signed with the UFC in 2007 and made his official UFC debut against Tyson Griffin. The two top prospects put on a Fight of the Night performance, which Edgar barely won via decision. Edgar went on to win his next two fights as well, defeating grappler Mark Bocek and veteran striker Spencer Fisher. Next up for Edgar, was fellow wrestler Gray Maynard, who ended Edgar’s undefeated streak using superior wrestling to win a unanimous decision victory. Edgar bounced back from his first career loss with consecutive wins over Hermes Franca, former UFC lightweight champion Sean Sherk, and Matt Veach to earn a title shot against reigning UFC lightweight champion B.J. Penn at UFC 112. Edgar scored the upset decision, though the judges’ decision was considered controversial, ultimately leading to an immediate rematch. In the sequel, Edgar used superior quickness and movement to win a decision solidifying his status as the top lightweight fighter in the world. Edgar’s first title defense came against the only man to ever defeat him, Gray Maynard. The two rivals squared off at UFC 125 in a thrilling fight back-and-forth fight that ended in controversy as the judges rendered the decision a draw. Another rematch was required as both fighters prepared to complete their trilogy at UFC 136. Maynard had Edgar badly hurt, but Edgar stormed back to finish Maynard via 4th round TKO.

2011 Breakdown:
Edgar went 1-0-1 in 2011, solely fighting against Gray Maynard.
Edgar and Maynard faced off for the title at UFC 125, with Maynard being the strong betting favorite, despite his challenger status. Maynard pounced early, nearly finishing Edgar with strikes in the 1st round. Edgar was able to regain his senses between rounds, and for the remainder of the fight, it was nearly a dead heat. The judges ended up scoring it a draw, leading to an automatic rematch. I scored it 48-46 Maynard, but it was a close fight, and most fans were clamoring for a rematch following the Fight of the Night performance.
The two would not meet again until 10 months later due to injuries. Edgar-Maynard 3 headlined UFC 136, and they once again did not disappoint. Maynard dropped Edgar in the 1st round and nearly finished him, but he just could not put him away. Similar to their last fight, Edgar bounced back in the next two rounds using his movement and superior conditioning to continually score with quick punches. Entering the 4th round, it was anyone’s fight, but Edgar ended up making it his, finishing Maynard with punches to earn the come-from-behind TKO victory.

2012 Forecast:
Edgar has proven he is the toughest fighter on the block. He may not be the biggest or strongest, but he gets the job done. Edgar has been in his fair share of wars over the years, and it is questionable how long he can continue to battle back from this much adversity and punishment. Dana White has made it known he would like Edgar to drop down to featherweight, where his size would not be such a detriment. Edgar is used to fighting bigger guys though, and until he can’t handle them, there is little reason for him to vacate his title and move down to featherweight. Edgar’s speed advantage and movement gives him a distinct edge against most other lightweights. Edgar is set to make his fourth title defense against Ben Henderson in 2012.