Notice: Function WP_Scripts::localize was called incorrectly. The $l10n parameter must be an array. To pass arbitrary data to scripts, use the wp_add_inline_script() function instead. Please see Debugging in WordPress for more information. (This message was added in version 5.7.0.) in /var/www/wp-includes/functions.php on line 5835
 Frank Mir - Ranking MMA 
Notice: A non well formed numeric value encountered in /var/www/wp-content/themes/mma-sport-magazine/inc/live-style.php on line 40 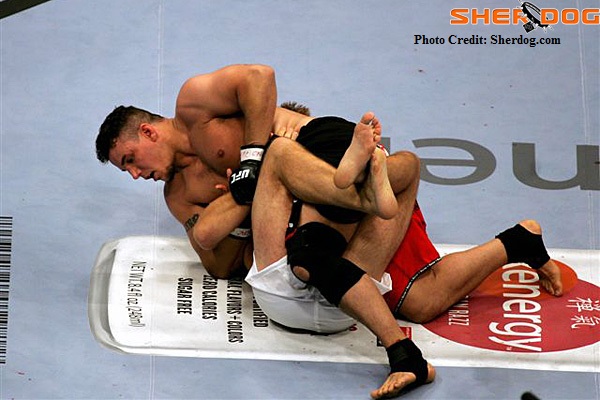 Background:
Frank Mir was the former UFC heavyweight champion, while also capturing the interim title following a comeback from injuries suffered in his 2004 motorcycle crash. Mir was competing in grappling tournaments before turning his attention to mixed martial arts in 2001. Mir won his first two fights on the independent circuit before signing with the UFC later that year. Mir wouldd submit his first two opponents, Roberto Travern and Pete Williams, to quickly solidify himself as a rising contender in the division. Mir’s quick rise was halted by veteran Ian Freeman who pulled off the upset at UFC 38, hurting Mir with punches and eventually forcing the TKO in the very 1st round. Mir bounced back by submitting Tank Abbott before finishing Wes Sims. Mir moved on to face Tim Sylvia for the UFC heavyweight championship at UFC 48. In the first minute of the fight, Mir was able to grab hold of Sylvia’s arm and break it forcing the ref to stop the fight. Mir was unable to defend his championship as a few months later he was involved in a motorcycle accident that nearly ended his career. Mir would be forced to vacate his title as he rehabbed from injuries. Mir would finally make his return nearly 18 months after his last fight to face off against fellow grappler Marcio Cruz at UFC 57. Mir struggled throughout as Cruz eventually finished Mir via 1st round TKO. Mir would win his next fight via decision against Dan Christison, but it was painfully obvious that Mir was struggling to fight at his previous level. Mir would suffer his 2nd loss in 3 fights as rising prospect Brandon Vera finished Mir with strikes in the 1st round. Mir would take a 9-month hiatus to rehab his various injuries, finally making his return at UFC 74 opposite striker Antoni Hardonk. Mir looked impressive, submitting Hardonk in the opening minutes of the fight. Mir’s next fight would be a high-profile bout with recently-signed WWE star Brock Lesnar at UFC 81. The highly-anticipated showdown started out quickly as Lesnar scored with punches and an early takedown. Lesnar was docked a point for illegal blows to the back of the head, giving Mir a chance to recover. Following another Lesnar takedown, Mir was able to latch onto Lesnar’s leg, submitting him with a kneebar. Mir was back in title contention as he agreed to coach season 8 of The Ultimate Fighter opposite PRIDE legend Antonio Rodrigo Nogueira. Following the filming of TUF 8, Mir and Nogueira faced off at UFC 92 with Mir being cast as the heavy underdog. Mir stunned the MMA world by continually beating Nogueira to the punch, eventually scoring a 2nd round TKO for the interim heavyweight championship. Mir looked to unify the titles as he faced off with heavyweight champion and heated rival Brock Lesnar at UFC 100. Lesnar dominated Mir throughout the fight, controlling him with his wrestling and eventually finishing him with punches in the 2nd round TKO. Mir bounced back from his humbling loss by impressively finishing Cheick Kongo at UFC 107. Mir rocked Kongo with a big left hand before submitting him via guillotine. Mir would once again vie for the UFC heavyweight interim championship as current champion Brock Lesnar was sidelined due to illness. Mir faced off against Shane Carwin at UFC 111, but once again struggled against a bigger, stronger wrestler as he was quickly finished via TKO in the 1st round. Mir bounced back once again, defeating veterans Mirko Cro Cop and Roy Nelson. Mir looked to make it 3 in a row as he faced off with a revenge-minded Antonio Rodrigo Nogueira at UFC 140. Mir once again pulled off the victory this time submitting Nogueira after nearly being finished himself. Mir is on the verge of another possible title shot heading into 2012.

2011 Breakdown:
Mir fought two times in 2011, winning both co-main event fights.
Mir faced off against one of his friends, Roy Nelson, at UFC 130. Nelson tried to initiate the clinch early as they worked along the fence. Mir began getting the better of the strikes due to landing some solid knees. Mir eventually scored a takedown and mounted Nelson before both men returned to the clinch. In round 2, Mir continued to find success by taking Nelson down. Mir was unable to keep Nelson down for long, but it did not matter as he scored with kicks to the body of a tiring Nelson. Coming into the 3rd round, Nelson looked completely exhausted. Mir dominated the final round as he backed Nelson up with strikes before taking him down to the floor. Mir landed some solid elbows towards the end of the round, but was unable to finish him. Mir took home the one-sided unanimous decision victory.
Mir moved on to face former rival Antonio Rodrigo Nogueira at UFC 140 in a rematch of their 2008 bout. Nogueira tried to push forward early as the moved to the clinch against the fence. Mir briefly took Nogueira down, but Nogueira popped back up and landed a couple of solid right hands. Nogueira continued to press with strikes and looked to have Mir badly hurt. Nogueira landed a few more shots that sent Mir to the floor. Nogueira went for a guillotine, but Mir was able to reverse and quickly land in side control. Mir latched onto Nogueira’s arm and immediately started threatening with a kimura. Mir continued to apply pressure until Nogueira’s arm popped and the fight was stopped.

2012 Forecast:
Frank Mir has quietly worked his way back into title contention after a 3-fight winning streak. Though he won all 3 of those fights, his performances were hardly considered impressive. Motivation has always been a key component to Mir’s success in the octagon. When Mir is fired up and in the underdog position he seems to perform at his best. Over the last few years Mir has experimented with powerlifting in order to compete with the heavier, stronger fighters in the division, but that has also taken a toll on his conditioning. Mir needs to tone down his lifting in order to have a chance at winning the UFC heavyweight championship again. Mir’s submission game is still top-notch, but his striking has stalled ever since he put on mass.