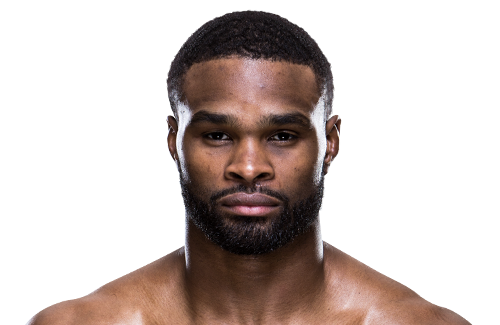 Woodley was born and raised in Ferguson, Missouri. He was the eleventh of thirteen children born to Sylvester and Deborah Woodley. He was raised by his mother after his father left the family early in his life. In high school, he was a two-sport athlete, competing in American football and amateur wrestling.[6][7]

After graduating from McCluer High School in 2000, Woodley attended University of Missouri and joined their wrestling program. There, he became a two-time All-American; once in 2003 and again in 2005.[8] Woodley graduated from the university in 2005 with a major in Agricultural Economics.[9]

Woodley fought his first professional fight on February 7, 2009, against Steve Schnider. It was held by Headhunter Productions at the Holiday Inn Select Executive Center in Columbia, Missouri. Woodley won via submission in the first round.[10]

Woodley’s second professional bout was against Jeff Carstens on April 30, 2009. He won the bout via submission in the first round.[11]

Woodley made his Strikeforce debut against Sal Woods in St. Louis, Missouri.[12] The fight was at the event Strikeforce: Lawler vs. Shields on June 6, 2009. Woodley won the fight by submission late in round one. After the win, Strikeforcesigned Woodley to a six-fight deal.[13]

Woodley made his second appearance for Strikeforce on the Strikeforce Challengers: Kennedy vs. Cummings card. He defeated Zach Light via submission in the second round.

On the Strikeforce Challengers: Woodley vs. Bears card, Woodley had his third fight for Strikeforce, defeating Rudy Bearsvia arm-triangle submission.[14][15][16]

Woodley’s next bout was against Nathan Coy at Strikeforce Challengers: Lindland vs. Casey in Portland, Oregon. He won via split decision.

On October 9, 2010, at Strikeforce: San Jose, Woodley defeated André Galvão via knockout midway in the first round.

Woodley fought Tarec Saffiedine on January 7, 2011, in Nashville, Tennessee at Strikeforce Challengers: Woodley vs. Saffiedine.[17] Woodley won the fight via unanimous decision. After the win, Woodley was signed to a contract extension with Strikeforce.[18]

Woodley faced Nate Marquardt on July 14, 2012, at Strikeforce: Rockhold vs. Kennedy for the vacant Strikeforce Welterweight Championship.[22] He lost the fight via KO in the fourth round.

Woodley faced Jay Hieron on February 2, 2013, at UFC 156 in his promotional debut, replacing an injured Erick Silva.[23] Woodley won the fight via KO at just 36 seconds of the opening round.

Woodley next faced off against Josh Koscheck at UFC 167 on November 16, 2013.[26] He won the fight via knockout in the first round. The win also earned him his first Knockout of the Night bonus award.[27]

Woodley next faced former Interim Welterweight Champion Carlos Condit at UFC 171.[28] Woodley won via TKO after Condit suffered a knee injury in the second round.[29]

On April 8, 2014, Woodley’s new eight-fight contract with the UFC was announced alongside his match against Rory MacDonald at UFC 174.[30] He lost the fight via unanimous decision.

Woodley next faced Dong Hyun Kim on August 23, 2014, at UFC Fight Night 48, replacing Hector Lombard.[31] He won the fight via TKO early in the first round.[32] The win also earned Woodley his first Performance of the Night bonus award.[33]

Woodley faced Kelvin Gastelum on January 31, 2015, at UFC 183 in a catchweight bout after Gastelum failed to make the welterweight limit.[34] He won the fight via split decision.[35]

Woodley was expected to face Johny Hendricks on October 3, 2015, at UFC 192.[36] It was announced on October 2, 2015, that Hendricks was forced out of the fight due to complications with weight cutting.[37]

Woodley faced welterweight champion Robbie Lawler on July 30, 2016, in the main event at UFC 201.[38] He won the fight via knockout halfway through the first round to claim the UFC Welterweight Championship.[39] This win earned him the Performance of the Night award.[40]

Woodley made his first title defense against Stephen Thompson on November 12, 2016, at UFC 205.[41] The fight ended in a majority draw with two judges scoring the fight 47–47 and the third 48–47 in favor of Woodley.[42] Subsequently, both fighters were awarded Fight of the Night bonus awards.[42][43]

The rematch with Thompson took place on March 4, 2017, in the main event at UFC 209. It was another closely contested bout with Woodley winning via majority decision.[44][45]

For his third title defense, Woodley faced Demian Maia on July 29, 2017, in the co-main event at UFC 214.[46] He won the fight by unanimous decision.[47] Woodley stated after the contest that he had torn his labrum in his right shoulder in the opening round. Woodley would later have reconstructive surgery to repair the damage.[48][49][50]

Woodley next defended the UFC Welterweight Championship against Darren Till on September 8, 2018, at UFC 228.[51] He won the fight via submission in the second round.[52] This win earned him the Performance of the Night award.[53] Woodley also received his Brazilian Jiu-Jitsu black belt in the cage from Din Thomas following his victory.[54]

In the fifth defense of his Welterweight title, Woodley faced Kamaru Usman on March 2, 2019, in the co-main event at UFC 235.[55] He lost the fight by unanimous decision, ending his nearly three-year reign as Welterweight champion.[56]