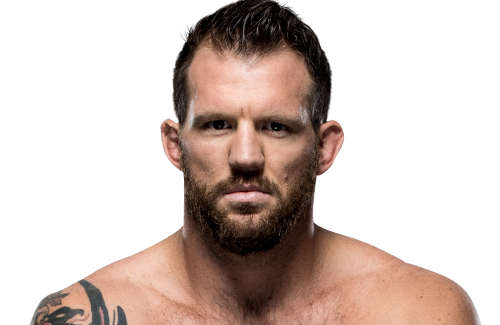 Ryan Bader was born in Reno, Nevada. He entered mixed martial arts after a successful career in amateur wrestling. He attended Robert McQueen High School where he won two state championships and was ranked as high as fourth in the country for wrestling. He attended Arizona State University where he was college teammates with former UFC Heavyweight ChampionCain Velasquez and CB Dollaway. While attending ASU, Bader was a three-time Pac-10 Champion, winning titles in 2003, 2004, and 2006. He was also a two-time All-American, placing fourth in 2004 as a sophomore and seventh in 2006 as a senior. He began training at Arizona Combat Sports in early 2007.

Bader’s UFC career began as a contestant on season 8 of The Ultimate Fighter. Bader, the first light heavyweight selected by coach Antônio Rodrigo Nogueira, went on to win his first three fights on the show to fight with Vinicius Magalhães on December 13, 2008 at The Ultimate Fighter 8 Finale.

At the finale, Bader defeated Magalhães by way of a quick, first-round knockout, earning the title of “The Ultimate Fighter” and winning the traditional “six-figure UFC contract”. An overhand right dropped Magalhães, and Bader followed up with strikes on the ground to take the win, less than halfway through the first round.

Bader’s first post-TUF fight was at UFC Fight Night 18 against Carmelo Marrero, whom he defeated via unanimous decision, scoring 30–27 on all three judges’ scorecards. During the match, Bader tore his medial collateral ligament and posterior cruciate ligament, which kept him sidelined until the next fall.

Shortly after the Marrero fight, Bader appeared alongside fellow Ultimate Fighter 8 winner Efrain Escudero in the UFC’s sixth video game, UFC 2009 Undisputed. He and Escudero were available through special code obtained by pre-ordering the game from Gamestop.[6] On September 10, 2009, he and Escudero were made available for download on PlayStation Network and Xbox 360 Marketplace.

Bader returned against Eric Schafer on October 24, 2009, at UFC 104.[7] The fight was mainly dominated by Bader, who scored with a powerful attack of combinations standing and controlled the grappling, en route a unanimous decision victory (30–27, 29–26, and 30–27).

Next for Bader was Keith Jardine, who he fought on February 21, 2010 at the UFC’s debut effort in Australia, UFC 110.[8] Bader scored a sharp jab on the tiring Jardine, which set up a flying knee to the chest and a left hook at 2:10 of the third round to secure a KO victory for Bader.

Bader moved his UFC record to 5-0 at the expense of Antônio Rogério Nogueira at UFC 119, controlling him most of the fight with his wrestling and using his jab and short combinations to stop much of Nogueira’s offense. All three judges scored the fight 30–27 for Bader.[10]

Four months after his victory over Nogueira, Bader fought fellow rising prospect Jon Jones on February 5, 2011, at UFC 126,[11] where he received the first loss of his MMA career after tapping out to a modified guillotine choke in the second round.

In a massive upset, Bader lost to Tito Ortiz on July 2, 2011 at UFC 132 by an arm-in guillotine choke which Ortiz secured following a knockdown of Bader.[12]

Bader then faced Jason Brilz on November 19, 2011 at UFC 139.[13] He defeated Brilz at 1:17 of the first round via KO, landing a straight right behind Brilz’s ear causing him to immediately fall to the mat face-first.[14]

Bader next faced former Light Heavyweight champion Quinton Jackson on February 26, 2012 at UFC 144.[15] Jackson weighed in over the Light Heavyweight weight allowance of 206 lbs by 5 lbs, weighing in at 211 lbs.[16] Bader accepted the fight at a catchweight and received 20% of Jackson’s purse. Bader won via unanimous decision, with all three judges scoring the fight 30–27.[17]

Bader faced former title challenger Vladimir Matyushenko on January 26, 2013 at UFC on Fox 6.[20] He won the fight via guillotine choke submission at just 50 seconds of the first round, earning his first Submission of the Night honors, and also having the fastest UFC Light Heavyweight submission.[21][22]

Bader faced Rafael Cavalcante on June 14, 2014 at UFC 174.[29][30] He won the fight via unanimous decision. Bader’s wrestling was displayed once again, controlling Feijão the majority of the bout.[31]

Bader faced Anthony Johnson in the main event on January 30, 2016 at UFC on Fox 18.[40] His winning streak was interrupted, as he lost the fight via knockout in the first round.[41]

Bader next faced Ilir Latifi on September 3, 2016 at UFC Fight Night 93.[42] He won the fight via knockout in the second round and was awarded a Performance of the Night bonus.[43][44]

Bader faced Antônio Rogério Nogueira in a rematch on November 19, 2016 in the main event at UFC Fight Night 100.[45] He won the fight by TKO in the third round with ground and pound after dominating Nogueira on the mat.[46]Bader’s fight against Nogueira was the last on his UFC contract and afterward he was a free agent.

On Ariel Helwani’s podcast, the MMA Hour, Bader stated that he has a Bellator MMA contract on hand, that negotiations are in process, and that the UFC has the right to match the Bellator offer. If the UFC chose not to match then his desire would be for an immediate fight against the current Bellator Light Heavyweight Champion Phil Davis, whom he already beat in the UFC. On March 21, 2017, Bader announced that the UFC had not sought to match Bellator’s offer and that he was officially signed a six-fight deal with Bellator MMA.[47]

Bader was officially unveiled as a fighter for the company at Bellator 175. After the main event, Bader entered the cage and it was announced he would face Muhammed Lawal at Bellator 180 on June 24, 2017. However, Lawal pulled out of the fight and Bader faced Bellator Light Heavyweight champion Phil Davis in a rematch.[48] Bader and Davis first met at UFC on Fox: Gustafsson vs. Johnson on January 24, 2015 with Bader winning by split decision. Bader won the rematch again by split decision to become the new Light Heavyweight champion.[49]

In his first title defense, Bader faced Linton Vassell at Bellator 186 on November 3, 2017.[50] He won the fight via TKO in the second round.

In the final, Bader faced Fedor Emelianenko for the vacant Bellator Heavyweight World Championship in the main event at Bellator 214 on January 26, 2019.[53] Bader claimed the title by winning via knockout just 35 seconds into the first round, thus becoming the first ever simultaneous two-weight champion in Bellator history.[54]