Notice: Function WP_Scripts::localize was called incorrectly. The $l10n parameter must be an array. To pass arbitrary data to scripts, use the wp_add_inline_script() function instead. Please see Debugging in WordPress for more information. (This message was added in version 5.7.0.) in /var/www/wp-includes/functions.php on line 5835
 Anthony Pettis - Ranking MMA 
Notice: A non well formed numeric value encountered in /var/www/wp-content/themes/mma-sport-magazine/inc/live-style.php on line 40 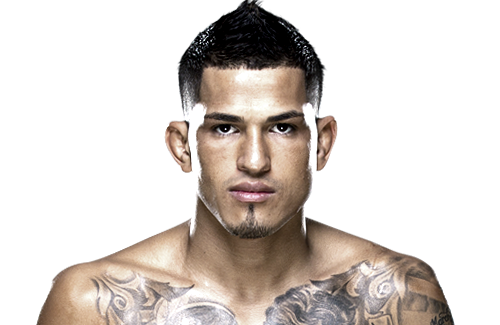 Born to Eugene Pettis, Jr. and Annette Garcia, Anthony Pettis grew up in the south side of Milwaukee, Wisconsin, along with his older brother Reynaldo Pettis and younger brother Sergio Pettis, who fights in the flyweight division.[7] Pettis is of Puerto Rican and Mexican ancestry. His grandfather, Eugene Perez, Anglicized the family name from Perez to Pettis to avoid discrimination. Pettis attended Dominican High School.[8][9]

He started training taekwondo and boxing at the age of 5. In college he also started wrestling. When he went to train mixed martial arts at Roufusport at the age of 18 he had already a 3rd degree black belt in taekwondo. He later trained in capoeira.[10][11]

Anthony Pettis made his professional MMA debut in December 2007. He compiled a record of 8–0 in all fights being held by Adam Sandoval and Duke Roufus before debuting with the World Extreme Cagefighting (WEC), winning the Gladiator Fighting Series Lightweight Championship. His last fight before joining the WEC was a short notice welterweight bout.[13] Pettis also has a professional kickboxing background. In MMA, Pettis is known[by whom?] for his smooth and technical fighting style, as well as his athletic feats and wide range of techniques.

Pettis is coached by kickboxer and MMA trainer Duke Roufus and is a member of Roufusport where he trains with fighters Alan Belcher, Erik Koch, Ben Rothwell, Ben Askren and Danny Downes.[14]

Before joining the WEC, Pettis went to The Ultimate Fighter: United States vs. United Kingdom tryouts, but didn’t make it to the show.[15]

Pettis was expected to make his promotional debut against Anthony Njokuani on April 5, 2009, at WEC 40. However, Pettis pulled out of the fight with a hand injury and was replaced by Bart Palaszewski.[16]

Pettis made his WEC debut at WEC 41, where he defeated Mike Campbell via first round triangle choke.

He was then expected to fight Rob McCullough at WEC 44 on November 18, but was pulled off the card with an undisclosed injury.[17]

Pettis rebounded from the loss with a head-kick KO victory over Danny Castillo on March 6, at WEC 47, earning Knockout of the Night honors.[19] Training for the fight, as well as Pettis’ family life, were both documented on an episode of the MTV show World of Jenks.[7]

Pettis suffered almost no damage in the bout with Castillo and made a quick return at WEC 48 against Alex Karalexis.[20] He won the fight via submission in the second round.

Pettis faced Shane Roller on August 18, at WEC 50.[21] Pettis surprised many by taking down Roller multiple times and frustrating him with fast-paced scrambles. Pettis displayed diversity in his striking with two Capoeira kicks, the martelo and the aú batido.[22][23][24] After several submission attempts, Pettis finally secured a fight ending triangle choke in the closing seconds of the fight, earning a Submission of the Night bonus.

His last WEC fight came against Benson Henderson on December 16, at WEC 53 for the WEC Lightweight Championship.[25] The fight was closely contested throughout, providing back and forth action, both standing and on the ground. In the fifth round Pettis ran up the cage, jumped off the cage, then landed a switch kick while airborne. Sports reporters later named this the Showtime Kick.[26][27] Pettis won the fight via unanimous decision (48–47, 49–46, 48–47) to become the final WEC Lightweight Champion. The fight was also awarded as Fight of the Night which won Henderson and Pettis an extra $10,000.[28]

In October 2010, World Extreme Cagefighting merged with the Ultimate Fighting Championship (UFC). As part of the merger, a majority of the WEC fighters were transferred to the UFC.[29]

Pettis was expected to face the winner of Frankie Edgar and Gray Maynard, which took place at UFC 125.[30] However, the bout was declared a draw, and Edgar–Maynard 3 was scheduled for UFC 130, but both fighters sustained injuries before the fight, which was postponed.[31]

Instead of waiting for the winner of Edgar/Maynard 3, Pettis faced Clay Guida on June 4, at The Ultimate Fighter 13 Finale.[32] Despite repeatedly getting taken down by Guida, Pettis showed good defense off his back, controlling Guida’s wrists and attempting multiple submissions, while taking little damage, even securing Guida’s back. However, Guida was able to escape and in return secured Pettis’s back to end the third round ultimately giving Guida the victory via unanimous decision.[33][34]

Pettis defeated Jeremy Stephens via split decision on October 8, at UFC 136 in a closely contested bout. Pettis used superior wrestling to control Stephens which was especially showcased in round 2, where he was able to take Stephens down three times.[35]

Pettis faced Joe Lauzon on February 25, at UFC 144.[36] He won the fight via first-round KO, with a head kick followed by punches. His performance earned Knockout of the Night honors.

After spending the majority of 2012 recovering from a litany of injuries,[37][38][39] Pettis faced Donald Cerrone on January 26, 2013, at UFC on Fox 6.[40] Pettis won the fight by TKO in the first round, finishing Cerrone with a kick to the body. The performance also earned Pettis Knockout of the Night honors. After the victory, Dana White said he was “sold” on Pettis and admitted that after Benson Henderson against Gilbert Melendez on UFC on Fox 7, Pettis was to be the next to fight for the lightweight title.[41]

On February 5, it was announced that Pettis would not wait for a title shot at lightweight, and would instead be dropping down to 145 pounds to challenge featherweight champion, José Aldo on August 3, at UFC 163.[42] However, on June 14, Dana White announced that Pettis had pulled out of the Aldo bout with a serious knee injury, and that Aldo would instead defend the title against Chan Sung Jung.[43]

A few weeks later after a quick recovery, it was announced on July 12 that Pettis would receive a UFC lightweight title shot as he replaced an injured TJ Grant against Benson Henderson on August 31, at UFC 164.[44] The fight was a rematch from the last WEC event, WEC 53, where Henderson was defeated by Pettis via unanimous decision. Pettis defeated Henderson via armbar submission in the first round. The win also earned Pettis his first Submission of the Night bonus award in the UFC.[45]

Pettis was expected to make his first title defense against TJ Grant on December 14, at UFC on Fox 9.[46] However, Grant revealed in mid-September that he had yet to be medically cleared after suffering a concussion in training and would not be eligible to compete on December 14.[47] Pettis was then expected to face Josh Thomson at the event.[48] However, the bout was canceled in mid-November after Pettis pulled out of the bout citing a knee injury.[49]

José Aldo again was in talks to fight Pettis after defending his title against Ricardo Lamas at UFC 169. At the post-fight press conference, Aldo expressed interest to move up and fight Pettis at 155 lbs.[50] However, those plans were quickly refuted as Pettis was selected to serve as a coach on The Ultimate Fighter 20, opposite Gilbert Melendezand the two would face each other at UFC 181 on December 6, 2014.[51] Pettis won the fight via guillotine choke in the second round, becoming the first man to finish Melendez.[52] He also earned a Performance of the Night bonus award.[53]

Pettis was expected to face Myles Jury on July 25, 2015, at UFC on Fox 16.[57] However, Pettis pulled out of the bout citing another injury and was replaced by Edson Barboza.[58]

On the heels of a three-fight losing streak, Pettis announced in June 2016 his intention to drop to featherweight for his next fight.[63] Pettis fought Charles Oliveira in his featherweight debut on August 27, 2016, at UFC on Fox 21.[64] Pettis won the fight via guillotine choke in the 3rd round.[65]

Pettis faced Max Holloway for the interim UFC Featherweight Championship on December 10, 2016, at UFC 206.[66] At the weigh-ins, Pettis came in at 148 pounds, three pounds over the featherweight limit of 145 lbs. for a championship fight. As a result, in the event that Pettis were to win the fight with Holloway, he would be ineligible for the UFC championship. Pettis was also fined 20% of his purse, which went to Holloway and the bout proceeded at a catchweight. Pettis is the first fighter to miss weight for a UFC championship bout since Travis Lutter at UFC 67 in February 2007.[67][68] He lost the fight via TKO in the third round.[69]

Pettis faced Dustin Poirier on November 11, 2017 at UFC Fight Night 120.[72] Pettis lost the fight after tapping out due to a broken rib in the third round, although it was announced as a TKO win.[73] This fight also won him the Fight of the Night bonus award.[74]

Pettis was expected to face Michael Chiesa on April 7, 2018 at UFC 223,[75] but the bout was cancelled two days before the event after Chiesa was injured in an incident in which Conor McGregor hurled a dolly through the window of the bus Chiesa was in. The shards of the shattered window cut Chiesa, who was deemed unfit to fight by the athletic commission.[76] On April 6, 2018, UFC Featherweight Champion Max Holloway was declared medically unfit by the New York State Athletic Commission and was pulled from his main event fight against Khabib Nurmagomedov. Pettis accepted the opportunity to fight Khabib Nurmagomedov at UFC 223 for the lightweight championship on a days notice with the hope of getting $1,000,000 for the fight. The UFC declined paying him this much money and the deal fell through.[77]

The bout with Chiesa was rescheduled to UFC 226.[78][78] At weight-ins, Chiesa weighed in at 157.5 pounds, 1.5 pounds over the non-title lightweight limit of 156 pounds. As a result, the fight proceeded catchweight bout with Chiesa forfeiting 30% of his purse to Pettis.[79] Pettis won the fight via triangle arm bar submission in the second round.[80]This fight earned him the Performance of the Night award.[81]

Pettis faced Tony Ferguson on October 6, 2018 at UFC 229.[82] He lost the bout via TKO (corner stoppage) after two back and forth rounds. Pettis’ longtime coach and cornerman, Duke Roufus informed the referee that he would not continue after suffering a broken hand.[83] This fight earned him the Fight of the Night award.[84]

On January 19, 2019, it was announced that Pettis would be returning to Welterweight for the first time since 2008 to face Stephen Thompson. This bout is expected to serve as the headliner of UFC on ESPN+ 6 on March 23, 2019.[85]