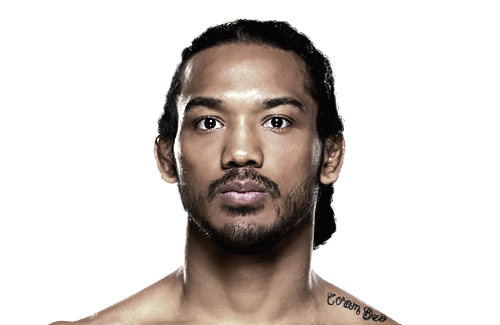 Henderson was born in Colorado Springs, Colorado to a Korean mother and an African American father.[5] He was raised in Federal Way, Washington. When Henderson was approximately 9 years old, his mother, Song, insisted that he take Tae Kwon Do lessons with his brother. “She’s Korean, I’m half-Korean, and it’s the traditional Korean martial art, so she wanted us to do that to get a little bit of the culture and tradition,” he says. Both Benson and his brother attained black belts in Tae Kwon Do.

He attended Decatur High School from 1998 to 2001. Benson became a part of the high school’s wrestling team. After graduating from high school, he attended Dana College in Blair, Nebraska and graduated in 2006 with a double major in criminal justice and sociology. While attending Dana College, Henderson was on the wrestling team, and was twice named an NAIA All-American.[3]

Henderson turned professional in 2006, winning his first match against Dan Gregary. He lost his third fight to Rocky Johnson via submission. However, this defeat was a minor setback. He rebounded with four straight wins before facing his toughest fight yet, against a UFC veteran, Diego Saraiva. Henderson came prepared as he dominated Saraiva for three rounds, winning a unanimous decision and his 7th professional win.

Three months later, Henderson made his World Extreme Cagefighting debut on January 25, 2009 at WEC 38 against Anthony Njokuani.[7] Henderson defeated Njokuani with a guillotine choke early in round two.

Henderson was given an opportunity to fight for the Interim WEC Lightweight Championship against Donald Cerrone when lightweight champion Jamie Varner was unable to defend his title due to an injury. The fight took place on October 10, 2009 at WEC 43.[9] Henderson won an exciting back-and-forth fight by unanimous decision. Both Henderson and Cerrone were awarded with an additional purse of $20,000 for fight of the night.[10] The bout was also awarded 2009 Fight of the Year for all of MMA by Sherdog.com[11]

Henderson faced Jamie Varner to unify the WEC Lightweight Championship at WEC 46 on January 10, 2010.[12] After being outboxed and outwrestled in the first two rounds, Henderson came back and caught Varner in a standing guillotine choke ending the fight at 2:41 of the third round.[13]

Henderson had his first title defense in a rematch with Donald Cerrone on April 24, 2010, at WEC 48.[14] defeating Cerrone via guillotine choke in the first round.[15]

Henderson faced Anthony Pettis on December 16, 2010, at WEC 53.[16] Henderson lost his title by unanimous decision. The fight won Fight of the Night honors.

In October 2010, World Extreme Cagefighting merged with the Ultimate Fighting Championship. As part of the merger, all WEC fighters were transferred to the UFC.[17]

Henderson next faced Jim Miller on August 14, 2011, at UFC on Versus 5.[20] Henderson dominated the streaking Miller throughout the fight, utilizing a stiff jab, great transitions, and vicious ground and pound throughout the match to snap Miller’s 7 fight win streak, the third longest in the UFC at the time. Despite being threatened with multiple deep submission attempts, Henderson escaped each attempt and advanced position with increasingly brutal punches and elbows. He earned a unanimous decision (30-27, 29-28, 30-26).[21]

Henderson faced Clay Guida on November 12, 2011, at UFC on Fox 1.[22] He won the fight via unanimous decision after three rounds in an action packed war that earned both fighters Fight of the Night honors.[23] With the win, he became the #1 contender for the UFC Lightweight title.

Henderson faced Frankie Edgar on February 26, 2012, at UFC 144.[24] Henderson defeated Edgar via unanimous decision to become the new UFC Lightweight Champion.[25] Both participants earned Fight of the Night honors for their performance.[26]

A rematch with Edgar took place on August 11, 2012, at UFC 150.[27] In a bout that was very tightly contested, Henderson defeated Edgar again, this time via split decision.[28]

Henderson faced Nate Diaz on December 8, 2012, at UFC on Fox 5.[29] Henderson punished Diaz with kicks, superior wrestling and ground and pound, Henderson knocked Diaz down twice with punches and was able to take his back on numerous occasions earning a unanimous decision victory.[30]

Henderson faced the final Strikeforce Lightweight Champion, and promotional newcomer Gilbert Melendez on April 20, 2013, at UFC on Fox 7.[31] Henderson won the fight by a closely contested split decision.[32] After 3 consecutive wins to retain the title, Henderson tied BJ Penn with the highest number of title defenses as a lightweight.

Henderson was expected to face TJ Grant on August 31, 2013, at UFC 164.[33] However, Grant was forced out of the bout with an injury, setting up a rematch with Anthony Pettis who defeated Henderson last time they fought via unanimous decision at the final WEC event, WEC 53.[34] Pettis defeated Henderson via submission (armbar) in the first round. This is the second time Henderson lost his championship belt and title to Pettis.

In his first post-title loss fight, Henderson faced Josh Thomson on January 25, 2014, in the main event at UFC on Fox 10.[35] Henderson defeated Thomson via split decision. He nearly became the first man to submit Thomson when he caught Thomson in a standing arm-triangle choke.[36] Many media outlets and observers were split on who they thought should have been declared the winner.[37][38][39] Thomson had one more takedown (5 to 4) and was able to secure Henderson’s back on multiple occasions, while Henderson was able to significantly outstrike Thomson (114 to 33) over the duration of the bout and was credited with the bout’s only submission attempt.[40]

Henderson faced Rustam Khabilov on June 7, 2014, in the main event at UFC Fight Night: Henderson vs. Khabilov.[41] He won the fight via rear-naked choke submission in the fourth round. The win also earned Henderson his first Performance of the Night bonus award.[42]

Henderson was scheduled to fight Eddie Alvarez on January 18, 2015 at UFC Fight Night 59.[46] However, Alvarez pulled out of the fight in early January due to illness, and was replaced by Donald Cerrone in a rematch.[47] Henderson lost the fight via a controversial unanimous decision.[48] 12 of 14 media outlets scored the bout in favor of Henderson.[49]

Henderson was expected to face Jorge Masvidal on April 4, 2015 at UFC Fight Night 63.[50] However, Henderson was pulled from the pairing with Masvidal in favor of a welterweight bout with Brandon Thatch on February 14, 2015 in the event headliner at UFC Fight Night 60, where he replaced an injured Stephen Thompson.[51] Henderson won the back and forth fight via submission in the fourth round.[52] Their performance earned both participants Fight of the Night honors[53]

A bout with Michael Johnson was initially linked as the event headliner for The Ultimate Fighter 21 Finale on July 12, 2015.[54] Although never officially announced by the UFC, the bout between Henderson and Johnson will not take place at this event.[55] Subsequently, Henderson revealed his intentions to return, at least temporarily, to the welterweight division and targeted a return date of November 2015 and a possible appearance on the UFC’s inaugural event in Seoul.[56]

Henderson was expected to face Thiago Alves on November 28, 2015, at UFC Fight Night 79.[57] However, on November 14, 2015, Alves pulled out the bout citing injury and was replaced by Jorge Masvidal.[58] Henderson won the back-and-forth fight via split decision.[59]

On February 1, 2016, Henderson announced that he had signed with Bellator MMA.[60][61] In his debut, he faced Andrey Koreshkov on April 22, 2016 at Bellator 153 for the Bellator Welterweight Championship.[62] Henderson lost the fight by unanimous decision.

For his second fight with the promotion, Henderson made his return to the lightweight division to fight Patrício Freire in the main event at Bellator 160 on August 26, 2016. The bout ended in anticlimactic fashion as Freire stopped himself early in round two to declare he had sustained a leg injury. As a result, Henderson was awarded a TKO victory due to injury. It was revealed post-fight that Freire had broken his shin in the first round after Henderson checked a low kick with his knee.

On August 31, 2016, it was announced that Henderson would challenge Michael Chandler for the Bellator Lightweight Championship on November 19, 2016 at Bellator 165.[63] Henderson lost the back-and-forth bout via split decision.

Henderson faced returning Bellator veteran Roger Huerta in the main event at Bellator 196 on April 6, 2018.[66] He won the fight via submission in the second round.

In November 2018, Bellator officials revealed that Henderson had signed a new exclusive, long-term contract with Bellator.[68]