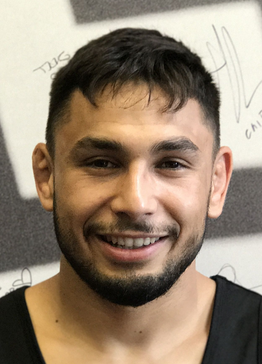 Perez started wrestling in the sixth grade along side with his two brother Silverio Esparza and Julian Perez. Perez represent West Hills College Lemoore in wrestling and he was the regional champion and All-American wrestler in his sophomore year in college.[5]

Perez fought all of his fights in United States where he made his professional debut on May 6, 2011 at TPF 9. He faced Jesus Castro and knockout Castro in round one.[6] He amassed a total of 16-4 before joining Dana White’s Tuesday Night Contender Series Season 1, Episode 5, facing Kevin Gray. He defeated Gray, and with the win, he was signed by UFC.[7]

Perez made his promotional debut on December 9, 2017 at UFC Fight Night: Swanson vs. Ortega against Carlos John de Tomas.[8] He won the fight via submission in round two.[9]

On February 24, 2018, Perez faced Eric Shelton at UFC on Fox: Emmett vs. Stephens.[10] At the weigh-ins, Perez weighed in at 126.5 pounds, a half pound over the flyweight non-title fight upper limit of 126 pounds. As a result, the bout proceeded at catchweight and Perez was fined 20% of his purse which went to his opponent Eric Shelton.[11] He won the fight via unanimous decision.[12]

Perez faced Joseph Benavidez on November 30, 2018 at The Ultimate Fighter 28 Finale.[15] He lost the fight via technical knockout out in round one.[16]