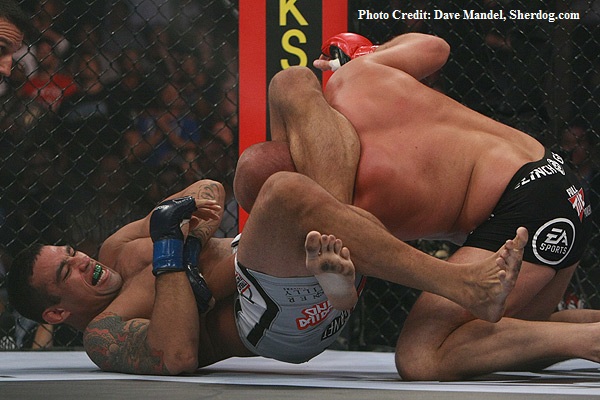 Background:
Fabricio Werdum is a former PRIDE, UFC, and Strikeforce veteran that has defeated some of the biggest names in the sport, including a recent 2010 victory over Fedor Emelianenko. Werdum was one of the top BJJ practitioners in his native Brazil as he transitioned over to mixed martial arts in 2002. Werdum opened up his MMA career in Europe going 2-0-1 before competing in Brazil’s Jungle Fights promotion where he scored impressive finish victories over Gabriel Gonzaga and Ebenezer Fontes Braga. Werdum eventually signed with PRIDE in 2005 and made his successful debut by choking out veteran Tom Erikson. Werdum moved on to submit Roman Zentsov before suffering his first career loss to Sergei Kharitonov via split decision. Werdum bounced back by defeating John Olav Einemo at PRIDE 31. Werdum moved on to take part in PRIDE’s 2006 openweight Grand Prix tournament. Werdum won his 1st round fight over Alistair Overeem via submission before falling to countryman Antonio Rodrigo Nogueira in the quarterfinals. Werdum left PRIDE following the loss, picking up a 1st round submission victory over Alexander Emelianenko on the independent circuit before signing with the UFC in 2007. Werdum made his UFC debut at UFC 70 against former UFC champion Andrei Arlovski. Werdum struggled throughout the fight as he begged Arlovski to come to the floor with him. Arlovski kept the fight standing and landed enough strikes to win via unanimous decision. Following his disastrous debut, Werdum bounced back with TKO victories over former contenders Gabriel Gonzaga and Brandon Vera. Werdum looked to be on the verge of a title shot as he faced off with unknown newcomer Junior Dos Santos at UFC 90. Werdum was stunned as he lost via knockout in the very 1st round. Werdum was surprisingly released by the UFC following the loss, eventually signing with Strikeforce in 2009. Werdum made his Strikeforce debut against Mike Kyle, submitting the undersized heavyweight via guillotine. Werdum moved on to face Antonio “Bigfoot” Silva, showing off his much-improved striking that earned him a close unanimous decision victory. Werdum’s biggest test to date would come against former PRIDE champion Fedor Emelianenko. Fedor had never suffered a legitimate loss in his fight career and was largely considered to be the top fighter in the world, but Werdum pulled off the impossible by submitting Fedor in the 1st round with a triangle armbar combination. Following the career-defining win, Werdum was forced to the sidelines due to injuries. Despite rumors of a possible rematch with Fedor, Werdum would end up participating in the Strikeforce heavyweight Grand Prix. Werdum faced off with Strikeforce heavyweight champion Alistair Overeem in the first round of the tournament. The fight was a clash in styles as Overeem looked to strike, while Werdum attempted to bring the fight to the floor. Though the fight was fairly close, Overeem controlled the most of the action, winning via unanimous decision, thus eliminating Werdum from the tournament. Werdum re-signed with the UFC following the loss and is set to make his return in 2012.

2011 Breakdown:
Werdum only fought once in 2011, losing his only fight to former Strikeforce heavyweight champion Alistair Overeem.
Werdum agreed to take part in the Strikeforce heavyweight grand prix tournament.
Werdum faced off with former PRIDE rival Alistair Overeem in the first round of the tournament. Werdum tried to flurry forward and then shoot, but Overeem continued to deny Werdum the takedown. Overeem finally followed Werdum to the floor, settling into top position where he landed an elbow strike before the round came to a close. In the 2nd round, Werdum continued to push forward behind strikes. Overeem responded with a left hand and then a combination that had Werdum constantly flopping to the floor. The 3rd round saw Werdum flurry forward with mild success, but he soon abandoned his striking to pull guard. Overeem took top position, but not much action was coming forth from either men. The ref restarted them a couple of times with the same sequence of events occurring. Overeem went on to win via unanimous decision.
Werdum signed with the UFC in late 2011 as part of the mass exodus of Strikeforce heavyweights to the UFC.

2012 Forecast:
Fabricio Werdum is the top ground specialist in the heavyweight division. Werdum placed 2nd in the 2011 Abu Dhabi grappling championships and has pulled off submission wins over Fedor Emelianenko and Alistair Overeem. Werdum’s striking has also improved over the years. Werdum has struggled when he is unable to score the takedown, and has resorted to pulling guard in most of his losses, instead of using his striking to setup the takedown. Werdum has been on the cusp of a UFC title shot before. For him to have another successful run in the UFC, he has to show his willingness to engage on the feet. There is no reason that Werdum cannot climb the ladder and be a title contender heading into 2012.