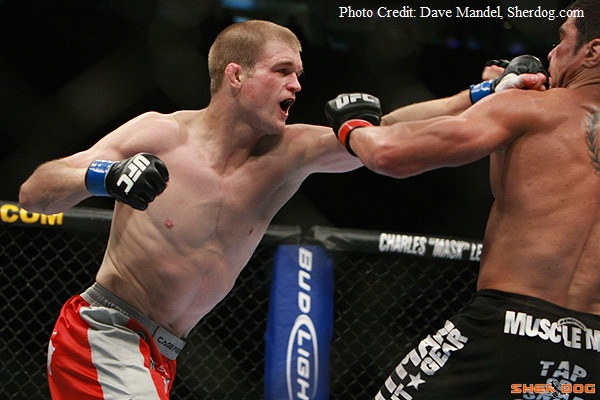 Background:
Evan Dunham was one of the fastest-rising prospects in 2010, but stumbled in mightily in 2011. Dunham got a late start in mixed martial arts, making his debut in 2007 at 26 years old. It did not take long for Dunham to establish himself on the independent circuit, winning his first 7 fights before signing with the UFC in 2009. Dunham defeated Per Eklund in his debut before beating respected veteran Marcus Aurelio via decision. Dunham continued to work his way up the ladder, knocking off TUF 8 champion Efrain Escudero and former top contender Tyson Griffin. Dunham was nearing title contention as he faced against former UFC lightweight champion Sean Sherk at UFC 119. Dunham seemed to win the 2nd and 3rd rounds, but the judges awarded Sherk a split decision victory. UFC president Dana White later stated that he felt Dunham won the fight. Dunham was set to face Kenny Florian with title ramifications on the line, but Florian went down with an injury and was ultimately replaced knockout artist Melvin Guillard. Guillard pulled off the upset, finishing Dunham with strikes. Dunham did bounce back with a win over Shamar Bailey to finish off 2011.

2011 Breakdown:
Dunham went 1-1 in 2011 suffering a brutal TKO loss to Melvin Guillard.
Dunham was quickly rising through the ranks of the UFC lightweight division, and was set to take headlining honors opposite title contender Kenny Florian. Unfortunately, Florian was forced out of the fight due to injury and replaced by Melvin Guillard. Guillard pulled off the upset by blasting Dunham with punches and big knees, leading to a 1st round TKO victory.
Dunham looked to bounce back against TUF 13 alum Shamar Bailey at UFC Fight Night 25. After a close 1st round, Dunham began to control the striking game, cruising to a hard-fought unanimous decision victory.

2012 Forecast:
Dunham’s career still holds a ton of promise, but the luster seemed to fade away following his loss to Guillard. Dunham is already 30 years old, and will likely need to throw himself back into the fire of top contenders in the very near future to stay relevant in the deep UFC lightweight division. Dunham is well-rounded and has quickly learned how to use his long reach to his advantage. Dunham will have to be careful of future opponents that will now be looking to test his chin.