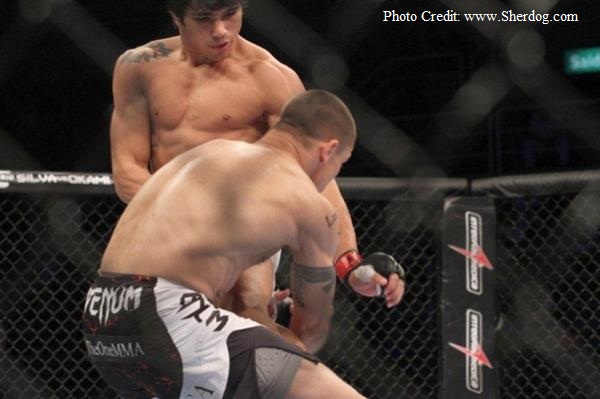 Background:
Erick Silva has quickly been earmarked as a possible future champion in the UFC welterweight division. Silva began his mixed martial arts career in Brazil 2005, quickly going 4-0 before losing his only career fight to the much-larger Mario Neto via decision. Silva rebounded by winning his next 8 straight fights on the Brazilian independent circuit. Along the way, Silva began competing for the Jungle Fights Promotion, winning their welterweight title in 2010 by defeating Gil de Freitas and Francisco Ayon in a one night, 4-man tournament. Silva signed with the UFC in 2011, eventually making his debut in his native Brazil against countryman Luis Ramos at UFC 134. Silva scored a lightning fast TKO finish within the first minute of their fight. Silva has constantly been referenced by fellow fighters, including his training partners at Team Nogueira, as one of the most talented prospects in the world today.

2011 Breakdown:
Erick Silva fought once in 2011, impressively debuting in the UFC with a 1st round victory.
Silva was set to face veteran Mike Swick at UFC 134 in a stiff UFC debut challenge, but Swick was forced off the card due to injury. In stepped Brazilian Shooto champion Luis Ramos on short notice. Silva showed why many experts pegged him as a top prospect, dropping Ramos with a huge right hand. Silva won his debut fight in under a minute via TKO.

2012 Forecast:
Erick Silva may be the future of the UFC welterweight division alongside Rory MacDonald. Silva has knockout power and excellent BJJ, while training under the tutelage of the Nogueira brothers. Some have called Silva a natural born fighter and his timing seems to be impeccable. Silva has yet to face a high-level wrestler, so that will be the true test as to whether Silva can be a future champion or simply an exciting challenger.