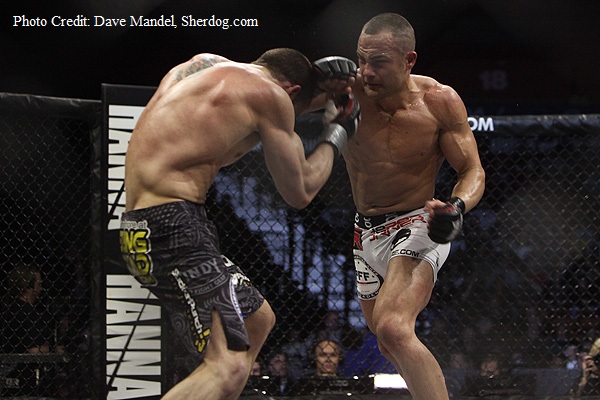 2012 Forecast:
Eddie Alvarez is the former Bellator lightweight champion and one of the perennial top lightweights in the world today. Alvarez made his MMA debut in 2003, winning his first 8 career fights, all coming via finish. Alvarez signed with Bodog, going 3-1 in the promotion, his only loss coming to welterweight Nick Thompson. Alvarez moved on to knockout Ross Ebanez before signing with Japan’s Dream promotion in 2008. Alvarez took part in Dream’s lightweight Grand Prix, defeating Andre Amade via 1st round TKO in the opening round. Alvarez soon earned his world ranking by defeating top lightweight contenders Joachim Hansen and Tatsuya Kawajiri in the next 2 rounds of the Grand Prix, as both fights were exciting back-and-forth wars. Alvarez was set to face Shinya Aoki in the finals, but due to injury, Alvarez was unable to continue. Alvarez eventually faced off with Aoki later that year, losing via 1st round submission. Alvarez left Japan to sign with the new upstart promotion, Bellator. Alvarez competed in Bellator’s first lightweight tournament as the the odds-on favorite to win. Alvarez defeated Greg Loughran, Eric Reynolds, and Toby Imada all via submission to win the tournament and stake claim to the Bellator lightweight championship. Alvarez would not defend the title for nearly two years though as he awaited Bellator to hold further lightweight tournaments. In the meantime, Alvarez defeated Katsunori Kikuno in Dream, while also racking up dominant stoppage wins over Josh Neer and Roger Huerta in non-title Bellator fights. Alvarez finally got to defend his Bellator title in 2011, defeating Pat Curran via unanimous decision. Alvarez once again put his title on the line in 2011, this time against Michael Chandler. In a back-and-forth fight that saw multiple momentum swings, Chandler submitted Alvarez in the 4th round. Alvarez’s loss was a huge upset considering his dominance over the last few years of competition. Alvarez requested a rematch, but was rebuffed due to Bellator’s tournament format. Alvarez has voiced his displeasure of having to re-enter a Bellator tournament and he may end up deciding to test out free agency once his contract expires. Alvarez has world-class talent. He is a solid wrestler with knockout power and excellent finishing skills. Alvarez will definitely be pursued by Zuffa where he would be an instant title contender in the UFC or Strikeforce. Bellator provided Alvarez with few adequate challengers over the years besides Chandler. For Alvarez to continue and merit consideration as one of the top lightweights in the world he will either have to earn his way towards a rematch with Chandler or jump ship to the UFC or Strikeforce. Alvarez has continually voiced his motivation as being solely based around money in which to support his family. So, if Bellator is willing to pay a hefty price they may be able to keep him, though that would conflict with their current financial model. Either way, at just 27 years old, Alvarez is primed to cash in on his pending free agency in 2012.