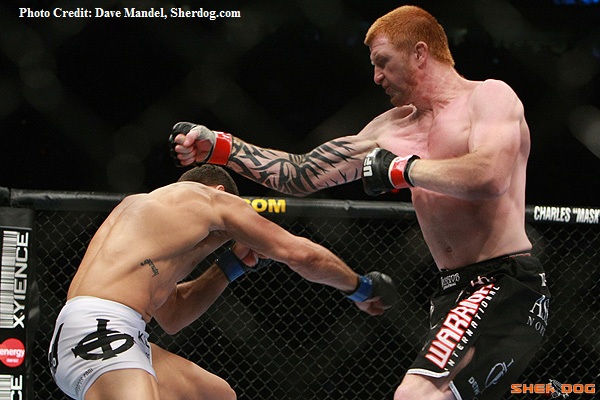 Background:
Ed Herman was the runner-up on season 3 of The Ultimate Fighter and has proven himself to be a tough challenger in the UFC middleweight division. Herman began his mixed martial arts career in 2002, winning his first 8 career fights, all via finish. Herman stepped up in competition to face Japanese veteran Kazuo Misaki in 2004, but lost via submission. Herman returned back to Oregon where he defeated future UFC veteran Brian Ebersole before suffering his second career loss, this time to Joe Doerksen. Herman ran off 4 straight wins, including victories over Glover Teixeira, Nick Thompson, and Dave Menne to claim a spot on season 3 of The Ultimate Fighter. Herman defeated Danny Abaddi and Rory Singer to earn a spot in the finals opposite Kendall Grove. Herman lost a close bout that was primarily fought on the ground. Herman looked to bounce back against Jason MacDonald, but was upset via 1st round submission. Herman’s career was likely at stake in his next fight as he faced off against Chris Price, but Herman easily won the fight via 1st round rear-naked choke. Herman’s career began to pick up steam as he secured wins over Scott Smith and Joe Doerksen. Herman moved on to face fast-rising BJJ expert Demian Maia. Herman was holding his own early in the fight, but was eventually put to sleep by a mounted triangle choke. Herman moved on to face Alan Belcher, but lost a razor-thin decision, once again putting Herman’s UFC career in jeopardy. Herman responded by defeating David Loiseau, but suffered a devastating knee injury in his next bout to Aaron Simpson at UFC 102. Herman would be sidelined for close to 2 years before finally making his return in 2011. Herman found instant success as he scored 1st round finishes over Tim Credeur and Kyle Noke that have him once again climbing the ranks of the UFC middleweight division.

2011 Breakdown:
Herman fought twice in 2011, winning both fights as he returned from a serious knee injury that wiped out his 2010 year.
Herman made his return at the TUF 13 Finale against TUF 7 alum Tim Credeur. Herman pushed the momentum early and connected on a big right uppercut that sent Credeur to the floor. Herman landed a few more punches before the referee waved off the fight.
Herman moved on to face TUF 11 alum Kyle Noke at UFC on Versus 5. Herman once again started off the fight pushing forward. They exchanged takedowns with Noke eventually taking top position. Herman immediately started looking for submissions from his back. Noke was able to escape most of the initial armbar attempts, but then found himself stuck in a leg lock. Herman quickly torqued the hold forcing Noke to tap out with less than a minute left in the 1st round.

2012 Forecast:
Herman looks to have returned in prime condition. He seems to be a more patient fighter and does not allow himself to get frustrated as he did in the past. Herman still lacks top-level striking, but he is fully capable of giving any fighter in the division a solid run for their money. If Herman can rattle off a couple of more wins he could legitimately make a solid run in the division with his experience and finishing skills. If Herman is going to continue and find success against stiffer competition, he will have to be the aggressor and push the pace while looking to take the fight to the ground or clinch where he is most effective.