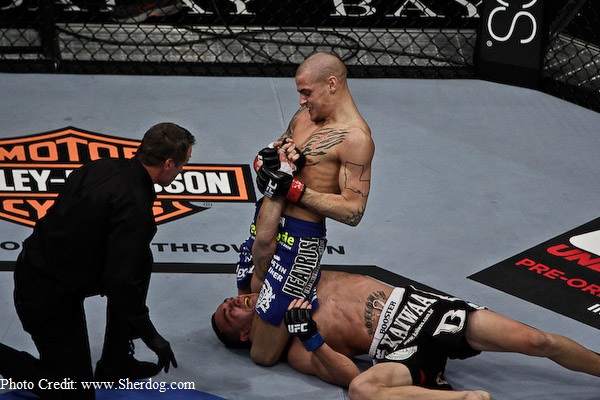 Background:
Dustin Poirier has quickly risen through the ranks of the featherweight division at just 22 years of age. Poirier racked up a 7-0 record on the independent scene before signing with the WEC as a lightweight in 2010. Poirier’s debut did not go as planned, dropping a unanimous decision to Danny Castillo. Poirier bounced back with a win over Zach Micklewright before transferring over to the UFC. Poirier would drop to featherweight, stepping in to face #1 title contender Josh Grispi at UFC 125. Poirier pulled off the upset using his striking and takedown defense. With the win Poirier instantly cast himself as one of the top contenders in the division. Poirier would rack up two more wins in 2011, defeating Jason Young and Pablo Garza, which now have him on the brink of earning a title shot coming into 2012.

2011 Breakdown:
Poirier went 3-0 in 2011, knocking off the #1 featherweight contender in the process.
Poirier stepped in to face Josh Grispi at UFC 125 following an injury to UFC featherweight champion Jose Aldo. Poirier was making his featherweight debut in what ultimately seemed to be a tune-up fight for Grispi. Yet, Poirier came out early establishing his striking superiority. Poirier consistently stuffed Grispi’s takedowns, earning himself a unanimous decision victory.
Poirier was scheduled to face Rani Yahya who was fresh off a win over former WEC featherweight champion Mike Brown, but Yahya was forced off the card with an injury. In stepped English newcomer Jason Young. Young put up a much tougher fight than expected, though Poirier had him badly rocked in the 1st round. Poirier ultimately prevailed thanks to his wrestling, earning himself another unanimous decision victory.
Poirier moved on to face fellow rising prospect Pablo Garza at UFC on Fox 1. Poirier once again proved his top contender status, choking out Garza in the 2nd round.

2012 Forecast:
Poirier is on the cusp of a title shot heading into 2012. Poirier is extremely well-rounded and at this stage in his development shows remarkable composure and maturity. The only thing that may stop Poirier on his path to the title is his lack of superior skills. Poirier is well-rounded, but he doesn’t really stand out in any one certain area. Therefore, when the going gets tough for Poirier what base will he fall back upon. His wrestling and striking may not be elite enough at this stage in his career to take out Aldo, yet it is hard to discredit the recent performances put forth by Poirier in 2011.