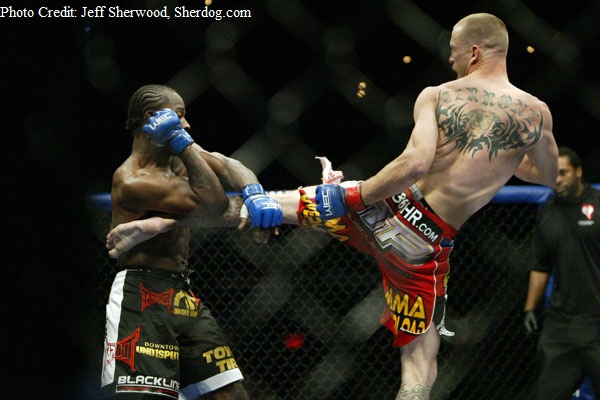 Background:
Donald “Cowboy” Cerrone began his mixed martial arts career in 2006 with a submission win over former UFC veteran Nate Mohr. Cerrone went on to compile a 7-0 record on the independent circuit with notable wins over Anthony Njokuani and Ryan Roberts before signing with the WEC in 2007. Cerrone won his WEC debut against Kenneth Alexander, though the fight was overturned due to Cerrone using a banned diuretic. Cerrone moved on to defeat Danny Castillo via 1st round submission to earn a #1 contender match against Rob McCullough at WEC 36. Cerrone won the fight, earning him a title shot against reigning WEC lightweight champion Jamie Varner. The championship fight was full of back-and-forth action, but ended in controversy as Varner was unable to continue due to an illegal knee thrown by Cerrone. Varner retained the title due to technical decision. Cerrone won his next fight over James Krause, paving the way for him to face Varner once again for the title. Varner was forced out of the fight and ultimately replaced by Ben Henderson setting up an interim lightweight championship bout. Cerrone and Henderson put on a show as they battled toe-to-toe for 5 rounds. Henderson escaped with a unanimous decision victory, though the fight could have gone either way. Cerrone bounced back with a win over Ed Ratcliff before a rematch was booked with Henderson. Henderson easily won the fight via 1st round submission. Cerrone moved on to avenge his previous loss to Jamie Varner before knocking off Chris Horodecki as he made his way over to the UFC. Cerrone quickly picked up where he left off, winning 4-straight fights over Paul Kelly, Vagner Rocha, Charles Oliveira, and Dennis Siver. Cerrone was then placed in the co-main event at UFC 141 opposite Nate Diaz. Cerrone could not capitalize on his momentum as Diaz controlled most of the fight with his boxing, winning via unanimous decision.

2011 Breakdown:
Cerrone fought an astounding 5 times in 2011, going 4-1 overall.
Cerrone made his UFC debut against Paul Kelly at UFC 126. It was a very close 1st round as Kelly found success on his feet, though Cerrone was getting the best of the grappling. In the 2nd round, Cerrone landed the takedown and proceeded to lock on a fight-ending rear-naked choke.
Cerrone was scheduled to face Mac Danzig at UFC 131 in his next fight, but instead faced off against newcomer Vagner Rocha after Danzig suffered an injury. Cerrone controlled the striking, winning a one-sided unanimous decision by punishing Rocha’s legs with kicks.
Cerrone jumped right back into the octagon accepting a fight with Paul Taylor at UFC on Versus 5 on short notice. Following an injury to Taylor, Cerrone would end up facing Brazlian prospect Charles Oliveira. Cerrone once again used his effective striking to hurt his opponent, quickly swarming with punches to earn the 1st round TKO victory.
Cerrone was now riding a 3-fight win streak in the UFC, and agreed to face Dennis Siver, who was also riding a 4-fight win streak coming into UFC 137. Cerrone rocked Siver with an early head kick, and continued to pressure Siver with strikes until Siver finally succumbed to a 1st round rear naked choke.
Cerrone was now considered one of the top UFC lightweight contenders, but against the advice of his coaches agreed to face Nate Diaz at UFC 141. Cerrone’s striking game was no match for Diaz’s boxing, and he lost a lackluster decision, looking nothing like the fighter of the previous 4 fights.

2012 Forecast:
There should be little doubt regarding Cerrone’s credibility as a contender following his stellar 2011 year. Cerrone can still get careless at times, but he does seem to have a better sense of urgency and has developed into a true finisher. Cerrone calmness in the cage can still be a bit concerning at times, but it has allowed him to recover quickly from adversity. If Cerrone’s motivation and head are in the right place he has the ability to beat any fighter on any given night. Cerrone looks primed to be a breakout star in the UFC for years to come.