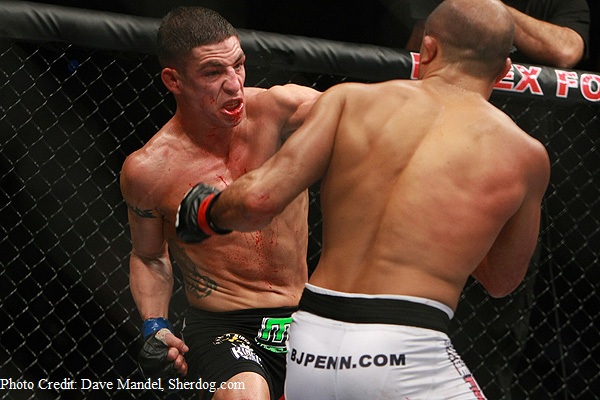 Background:
Diego Sanchez was the inaugural Ultimate Fighter 1 middleweight winner before finding success in both the UFC lightweight and welterweight divisions. Sanchez got his start in mixed martial arts back in 2002, racking up an 11-0 record, highlighted by wins over future UFC veterans Jorge Santiago, Mike Guymon, and Michael Johnson. Sanchez was chosen to compete on season 1 of TUF as a middleweight. Sanchez defeated Josh Rafferty, Josh Koscheck, and Kenny Florian to become the first TUF middleweight winner. Sanchez immediately dropped down to welterweight following The Ultimate Fighter, winning his next 5 fights over veterans Brian Gassaway, Nick Diaz, John Alessio, Karo Parisyan, and Joe Riggs. His wars with Diaz and Parisyan had quickly proven that Sanchez was a legitimate force and title contender in the UFC welterweight division. Sanchez’s path to a possible title shot was halted though as he suffered consecutive losses to Josh Koscheck and Jon Fitch. Sanchez competed twice more as a welterweight, winning both fights before announcing his move to 155 lbs. Sanchez debuted in impressive fashion, defeating veteran Joe Stevenson via unanimous decision. Sanchez moved on to face Clay Guida in another Fight of the Night performance, winning the closely contested bout and ultimately earning a UFC lightweight title shot against reigning champion B.J. Penn. Sanchez was rocked by Penn’s striking early and never seemed to recover, losing in the 5th round due to a deep cut. Sanchez decided to move back up to welterweight following the loss, but suffered a stunning upset to John Hathaway via unanimous decision. Sanchez bounced back with wins over Paulo Thiago and Martin Kampmann, though the latter was a controversial decision in what was likely the Fight of the Year.

2011 Breakdown:
Sanchez only fought once in 2011, but made it a fight to remember.
Sanchez faced off with Martin Kampmann at UFC on Versus 3. Sanchez looked a bit portly coming into the fight, but proved that his conditioning should never be questioned. Kampmann hurt Sanchez in the 1st round with strikes, but Sanchez stormed back in the 2nd and 3rd rounds. Sanchez continued to push forward despite being badly bloodied. Kampmann tagged Sanchez with counter strikes, but Sanchez used his flurries and aggressiveness to narrowly pull out a unanimous decision victory.
Sanchez was supposed to face former UFC champion Matt Hughes at UFC 135, but Sanchez was forced off the card due to injury.

2012 Forecast:
Sanchez has been in his fair share of wars over the years, having won Fight of the Night in 4 out of his last 6 fights. Sanchez seems to be becoming less concerned with strategically winning fights. Though it has gotten him in trouble against superior competition, it has become his trademark to simply go out and put on a show. Sanchez’s move back up to welterweight following his title loss at 155 lbs. is still questionable for his long-term career potential. Sanchez has the size and skill to make waves in the lightweight division, but as a welterweight, Sanchez struggles to use his wrestling and can be overpowered by stronger, bigger opposition. If Sanchez wants to truly take advantage of his skills a move back to 155 lbs. is necessary. Sanchez has struggled with personal issues throughout the last couple of years as well, which may have played an integral role in why he did not stay at lightweight.