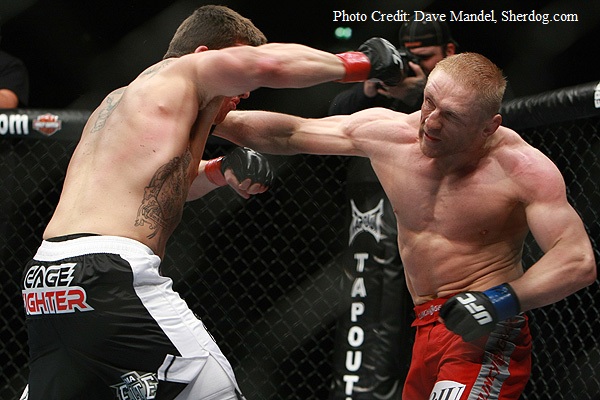 Background:
Dennis Siver has fought 13 times in the UFC, garnering a host of bonus checks, including 2 Knockout of the Night awards. Siver, born in Russia, but of German heritage, began his mixed martial arts career in 2004. Siver totaled a 10-3 overall record with a signature win over Jim Wallhead, eventually meriting a UFC contract in 2007. Siver lost his UFC debut to Jess Liaudin, but bounced back with a knockout victory over Naoyuki Kotani. Siver lost his next two fights against top contenders Gray Maynard and Melvin Guillard leading to his release from the UFC. Siver won a fight on the independent circuit and was immediately called re-signed by the UFC in 2009. Siver won his next three UFC fights over Nate Mohr, Dale Hartt, and Paul Kelly. Just as Siver’s career was starting to catch fire, he was defeated by TUF 9 winner Ross Pearson in a Fight of the Night performance. Siver bounced back by winning his next 4 fights over tough opposition (Spencer Fisher, Andre Winner, George Sotiropoulos, and Matt Wiman) to earn him recognition as a possibly title contender. With title implications on the line, Siver was soundly defeated by Donald Cerrone. Afterwards, Siver announced his intentions to drop down to featherweight.

2011 Breakdown:
Siver went 2-1 in 2011.
Siver faced jiujitsu ace George Sotiropoulos at UFC 127. Sotiropoulos was on the verge of a title shot following an impressive 7-fight win streak in the UFC. Yet, Siver pulled off the upset, narrowly using his striking and takedown defense to outwork Sotiropoulos for a stunning unanimous decision victory.
Siver moved on to face TUF 5 alum Matt Wiman at UFC 132. Wiman was riding a 3-fight win streak going into the pivotal lightweight showdown. Wiman had a dominating 2nd round where he busted Siver open with ground ‘n’ pound, but was unable to finish the fight. The other rounds were too close to call, but Siver ended up being awarded the controversial split decision propelling him into contender status.
Siver continued to move up the ranks, earning a matchup against fellow lightweight contender Donald Cerrone at UFC 141. Cerrone had won his first 3 UFC fights, 5 total counting his WEC performances. Cerrone struck first with a head kick that had Siver reeling for the rest of the fight. Cerrone dominated the remaining portions of the fight eventually dropping Siver with punches before locking on a fight-ending rear naked choke.

2012 Forecast:
Dennis Siver has proven to be a formidable opponent in the UFC going 7-2 since re-signing with the UFC. Siver brings a dangerous kickboxing game with his patented spinning back kick. Siver’s submission and takedown defense have improved significantly over the last few years allowing Siver to utilize his striking. Siver’s move to featherweight will be a difficult cut because he carries a lot of muscle on his frame, but at only 5’7, it was a necessary move if he were to ever challenge for the title. Siver should be a viable threat at featherweight as long as his body responds to the weight cut. His compact frame provides him the strength to land huge power strikes, while also making it difficult for his opposition to take him down or submit him. Siver’s chin and ability to fight off his back have thus far been the only hindrances at him making a run for a title.