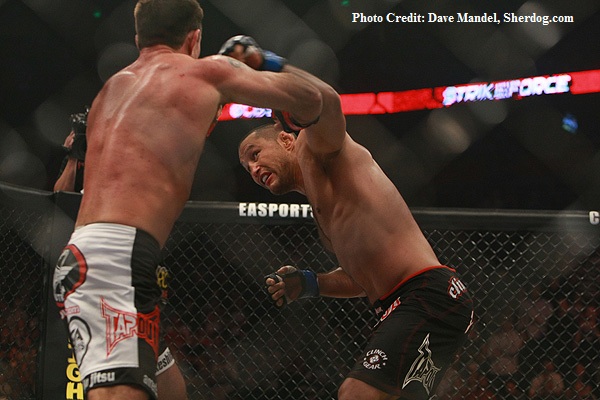 Background:
Dan Henderson has put together a Hall of Fame career fighting across varying weight classes and promotions. Henderson wrestled collegiately before competing in the Olympic games. Henderson eventually ventured over to mixed martial arts in 1997 after befriending fellow wrestlers and future MMA stars Matt Lindland and Randy Couture. Henderson’s first 9 fights all came in tournament-based formats. Henderson’s MMA debut came in Brazil as he won a 4-man, one-night tournament. Almost a year later, Henderson made his debut in the UFC at UFC 17, defeating veterans Allan Goes and Carlos Newton to win the UFC middleweight tournament. Henderson soon brought his skills to Japan’s Rings promotion. Henderson picked up notable, yet controversial decision victories over Renato Sobral, Antonio Rodrigo Nogueira, and Gilbert Yvel. Henderson would remain in Japan as he signed with PRIDE in 2000, making his debut at PRIDE 12 opposite Wanderlei Silva. Henderson suffered his first career loss via decision to Wanderlei in a hard-fought battle between future legends. Henderson rebounded with 3 straight wins over Renzo Gracie, Akira Shoji, and Murilo “Ninja” Rua, before suffering back-to-back losses to Ricardo Arona and Antonio Rodrigo Nogueira. Henderson bounced back with 4 consecutive wins over Shungo Oyama, Murilo Bustamante, Kazuhiro Nakamura, and Yuki Kondo, once again solidifying himself as one of the top 205-pounders in the world. Henderson was set to compete in PRIDE’s 2005 middleweight (205 lbs.) Grand Prix tournament, but lost in the opening round to Antonio Rogerio Nogueira. PRIDE would soon debut its welterweight (183 lbs.) Grand Prix tournament, where Henderson crushed Ryo Chonan and Akihiro Gono in the opening rounds before taking home a controversial decision over Murilo Bustamante in the finals to win PRIDE’s welterweight championship. Henderson moved on to split a pair of bouts with Kazuo Misaki before picking up wins over Vitor Belfort and Wanderlei Silva, the latter of which was via brutal knockout, earning him PRIDE’s middleweight championship. Following PRIDE’s demise, Henderson entered the UFC as the reigning PRIDE welterweight and middleweight champion. Henderson was immediately placed in a championship bout, opposite UFC light heavyweight champion Quinton “Rampage” Jackson. It was a hard-fought battle, but Jackson ultimately won the decision to retain his title. Henderson once again challenged for a UFC championship, this time at middleweight against reigning champion Anderson Silva. Henderson would come up empty-handed, losing via submission to Anderson Silva. Henderson bounced back, winning his next 3 fights over middleweight contenders Rousimar Palhares, Rich Franklin, and Michael Bisping. Henderson’s knockout victory over Bisping seemed to have him positioned for another title shot against Anderson Silva, but Henderson decided to leave the UFC and sign with Strikeforce. Henderson made his Strikeforce debut in 2010 against oversized welterweight Jake Shields for the Strikeforce middleweight championship. In a stunning upset, Henderson had Shields rocked in the 1st round, but ultimately succumbed to Shields’ superior grappling and conditioning, losing a 5-round unanimous decision. Henderson moved back up to light heavyweight following the loss and scored a knockout victory over Renato “Babalu” Sobral, which earned him the right to challenge Rafael “Feijao” Cavalcante for the Strikeforce light heavyweight championship. Henderson and Feijao put on a back-and-forth fight before Henderson finished him via 3rd round TKO victory. Henderson vacate his newly-acquired Strikeforce light heavyweight championship to temporarily move up to heavyweight and challenge former PRIDE heavyweight champion Fedor Emelianenko. In a battle of legends, Fedor seemed to have Henderson rocked, but Henderson was able to sneak in a lethal uppercut that sent Fedor tumbling to the floor, forcing the referee stoppage. Henderson went on to re-sign with the UFC in 2011, facing off against Shogun Rua at UFC 139. In what has been deemed the Fight of the Year, Henderson and Rua battled each other for 5 rounds, with Henderson ultimately coming out the victor via decision. Henderson has been promised a UFC light heavyweight title shot heading into 2012.

2011 Breakdown:
Henderson fought 3 times in 2011, winning all 3 bouts and quite possibly achieving one of the greatest years of fighting in MMA history.
Henderson began the year by challenging Rafael “Feijao” Cavalcante for the Strikeforce light heavyweight championship. Both fighters engaged in a back-and-forth 1st round where Feijao dropped Henderson with a big right hand. Henderson weathered the storm and landed a takedown, eventually finishing the round in the clinch. In the 2nd, Henderson was able to land a couple of takedowns that earned him the round as both men had limited success landing strikes. Henderson started out the 3rd round strong, scoring with a combination before landing his legendary right hand that dropped Feijao. Henderson pounced with punches and the ref was forced to stop the fight. Henderson would soon vacate the Strikeforce light heavyweight championship.
Henderson moved on to face legendary PRIDE heavyweight champion Fedor Emelianenko, despite giving up 15-20 lbs. Fedor came out head-hunting with wide, winging punches, but Henderson closed the distance with the clinch and landed a few knees to the body. Fedor escaped the clinch and connected with a flurry of punches that had Henderson falling to the floor. Fedor went in for the finish, but Henderson somehow snuck in a short uppercut that dropped Fedor. Henderson connected on a few more punches and the referee stepped in and stopped the fight.
Henderson returned to the UFC later in the year and faced off against fellow PRIDE legend Mauricio “Shogun” Rua at UFC 139. The fight was scheduled for 5 rounds due to its headlining status. Henderson wasted little time connecting on huge strikes that had Shogun in trouble. Shogun battled back, but the 1st round easily went to Henderson. In the 2nd, Henderson struck again, landing a big combination before both men fought to a virtual draw for the rest of the round. The 3rd round nearly saw Henderson put Rua down for good with a monstrous right hand, but Rua somehow hung in there, badly bleeding from his left eye. The tide began to turn in the 4th round as Rua continued to push forward while Henderson began to slow down. The striking was fairly even, but Rua easily mounted Henderson on the ground giving him his first round of the fight. In the final frame, Rua dominated nearly the entirety of the round as he once again mounted an exhausted Henderson. Rua was ultimately unable to finish Henderson and was forced to await the judges’ decision. Henderson narrowly earned the unanimous decision.

2012 Forecast:
Dan Henderson continues to defy the odds by fighting past the age of 40 and competing above his natural weight class. Henderson’s career is certainly Hall of Fame worthy, but he is still looking to add a UFC title to his resume before it is all said and done. Henderson’s chin and overhand right have led him to multiple victories throughout the years, but none more impressively than his 2011 campaign. Henderson has settled into the light heavyweight division as he has cited that his body struggles to make the 185-pound weight limit for middleweight. Henderson will be a huge underdog against reigning UFC light heavyweight champion Jon Jones, but he has has made it a knack of overcoming the odds throughout his career. Henderson’s body likely cannot withstand many more 5-round wars like his fight against Shogun, but as long as he stays healthy and shows that he can still compete with the elite of the division, he will likely continue his fighting career beyond 2012.