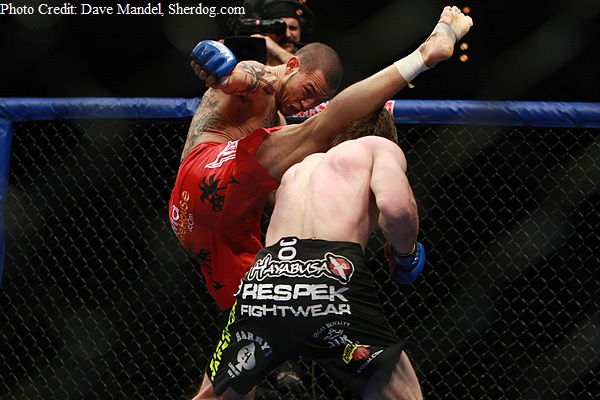 Background:
It is unfortunate that Cub Swanson’s career has been haunted with injuries because he truly brings an exciting fighting style to the cage. Swanson made his unsuccessful mixed martial arts debut in 2004, losing to UFC veteran Shannon Gugerty via submission. Following the debut loss, Swanson went on a terror winning his next 9 fights, including wins over Charlie Valencia and Mike Corey, while also avenging his only previous loss to Gugerty. Swanson made his WEC debut in 2007, winning his first two fights over Tommy Lee and Micah Miller before being upset by former UFC lightweight champion Jens Pulver via 1st round guillotine. Swanson bounced back with a win over Donny Walker on the independent scene before returning to the WEC and knocking off fellow striker and Japanese star Hiroyuki Takaya. Swanson was back in the mix and was placed in a #1 contender fight against Jose Aldo. Within seconds of the fight, Aldo landed a flying knee to win the fight via TKO. Swanson continued to mix wins with losses for the rest of 2009-2011, putting on two Fight of the Night performances against John Franchi and Ricardo Lamas.

2011 Breakdown:
Swanson only fought once in 2011 due to multiple injuries.
Swanson made his UFC debut at UFC on Fox 1 against Ricardo Lamas. Swanson started the fight out strong, winning the 1st round, but in the 2nd, Swanson allowed Lamas to take his back where he was forced to tap out due to submission.

2012 Forecast:
Swanson is still in the prime of his career at 28 years old, but he will need to start making his mark in the division very soon. Swanson’s exciting style has cost him victories in the past, but if he can fight a bit more conservatively and put his injuries behind him, there is no reason Swanson should be unable to compete against top competition.