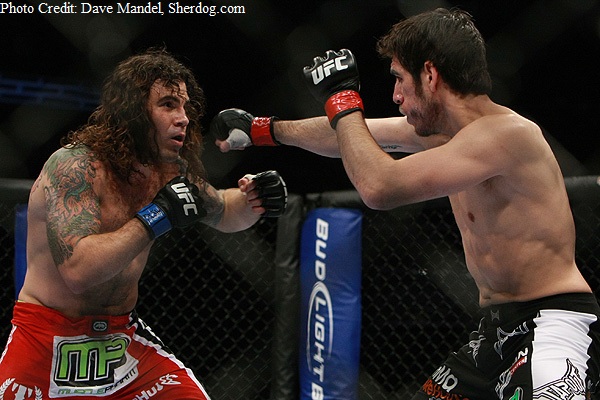 Background:
Clay Guida might as well be known as the peoples’ champion. He has become a fan-favorite due to his non-stop, straight-forward, crazy-hair style. Guida made his MMA debut way in 2003, finding mixed success at 3-3, before rattling off 15 straight wins to bring his overall record to 18-3. Guida struggled through a 1-3 stretch in 2006 as he stepped up in competition, defeating Josh Thomson for the Strikeforce lightweight title, though he lost his first title defense to Gilbert Melendez. Following a win in the WEC, Guida signed with the UFC. Guida won his UFC debut, but soon lost 3 out of his next 4 fights to top contenders Din Thomas, Tyson Griffin, and Roger Huerta. Guida was extremely competitive in each of the losses, notching two Fight of the Night awards. Following his loss to Huerta, Guida started to rely more on his wrestling, winning 3 straights fights, including a split decision victory over Nate Diaz. Guida could not keep his momentum as lost his next consecutive fights against top contenders Diego Sanchez and Kenny Florian. Guida rebounded by putting together a 4-fight win streak that placed him on the brink of a potential UFC lightweight title shot. Guida ended up losing a #1 contender fight to Ben Henderson in a close decision.

2011 Breakdown:
Guida went 2-1 in 2011, including a victory over former #1 contender Anthony Pettis.
Guida faced Japanese legend Takanori Gomi at UFC 125. Gomi seemed confused by Guida’s constant movement and was unable to get on track throughout much of the fight. Guida used his timely takedowns to bring Gomi to the floor where he locked on a 2nd round guillotine choke for the victory.
Meanwhile, due to an immediate rematch between Frankie Edgar and Gray Maynard, #1 contender Anthony Pettis was forced to wait. Instead of sitting idle, Pettis accepted a fight with Guida at the TUF 13 Finale. Guida used his wrestling to smother Pettis, landing little offense, but nonetheless controlling where the fight went. Guida snuck out with a unanimous decision victory, propelling him into a title contention.
Guida moved on to face Ben Henderson in a #1 contender fight for the UFC lightweight title. In a back-and-forth fight, that nearly saw both men score finishes, Henderson was able to squeak out the win. The fight earned Fight of the Night honors, the fifth time Guida had won the award.

2012 Forecast:
Guida has resurrected his career by becoming an effective points-based fighter. Guida does not have the finishing skills necessary to defeat top-level competition, but he does what he can do best, wrestle and push the pace. Guida has shown that he can hang with the best in the division, and though he may not be the most technical fighter, he has the ability to dictate the pace. If Guida can avoid getting in striking exchanges he should be able to continue and find success against lightweight contenders.