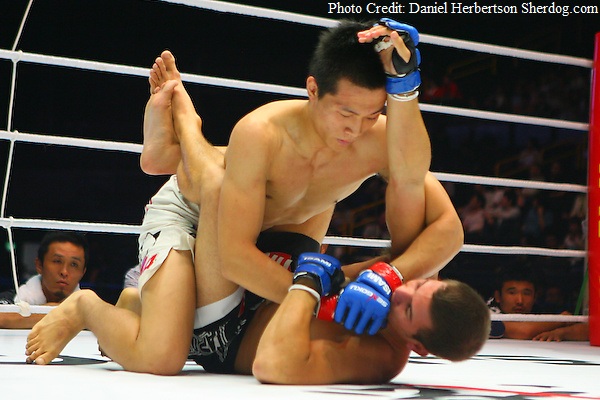 Background:
Chan Sung Jung, better known as the “Korean Zombie” amongst most fans has continued to develop into one of the marquee fighters of the UFC featherweight division. Jung, hailing from South Korea, made his mixed martial arts debut in 2007. Following a 6-0 run in his native South Korea, Jung traveled to the Asian mecca of MMA, Japan. Jung picked up his biggest win to date over Michihiro Omigawa before making his Sengoku debut where he would compete in their 2009 featherweight grand prix. In the 1st round of the tournament, Jung knocked off Shintaro Ishiwatari. Jung moved on to face grizzled veteran Masanori Kanehara, and in a back-and-forth contest that most observers had leaning towards Jung, Kanehara ended up walking out the victor. Jung would fight once more for Sengoku, defeating Matt Jaggers via submission, before signing with the WEC in 2010. Jung made his WEC debut against wily striker Leonard Garcia. In what proved to be a rousing performance by both men that was widely referred to as the Fight of the Year, Jung was robbed of a decision victory. Nonetheless, Jung won a new legion of American fans. Jung moved on to face George Roop, but in shocking fashion Jung was knocked out for the very first time in his career. Jung bounced back from the brutal finish by winning both his fights in 2011, avenging his previous loss to Leonard Garcia and upsetting recent title contender Mark Hominick.

2011 Breakdown:
Chan Sung Jung went 2-0 in 2011, racking up impressive finishes over former title contenders Leonard Garcia and Mark Hominick.
Jung was initially scheduled to face grappler extraordinaire Rani Yahya at UFC Fight Night 23, but Jung was forced off the card due to injury.
Jung finally made his UFC debut at UFC Fight Night 24 in a rematch with Leonard Garcia. Both fighters left off right from their last fight, letting their hands fly with reckless abandon. In the 2nd round, Jung brought the fight to the ground where he scored a twister submission to easily win Submission of the Night honors. It was a big confidence-gainer for Jung considering his last loss.
Jung would move on to face recent title contender Mark Hominick at UFC 140. Hominick immediately came forward looking to throw strikes, but Jung landed a quick counter right hand that dropped Hominick for the stunning knockout finish.

2012 Forecast:
Jung had a significant upswing in his career considering the way he left off 2010. Jung is immediately within striking distance of a title shot, but he will first have to get through at least one more top contender. Jung is still developing his fighting style and has become a bit more patient and strategic as of late. Jung has big power, loved to push the pace, and is well-versed on the ground. If Jung is aggressive and continues to show the improvements he made in 2011, he seems to be a legitimate threat as any to dethroning reigning UFC featherweight champion Jose Aldo.