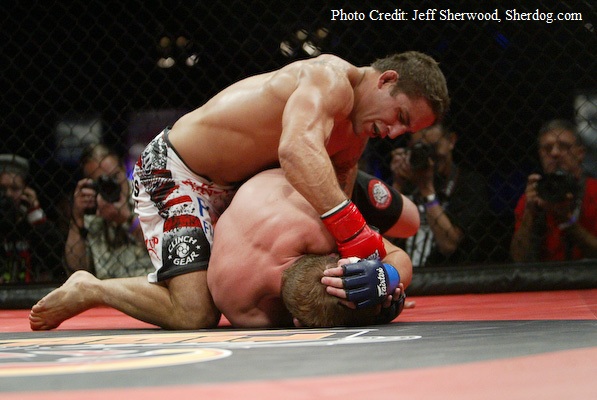 Background:
Chad Mendes is fairly new to the sport of mixed martial arts following his debut in 2008. Mendes was an all-American wrestler at Cal Poly-San Luis Obispo, where he placed 2nd in the NCAA championships his senior year. Mendes quickly found Urijah Faber and Team Alpha Male, beginning a quick rise up the prospect ranks. Mendes went 5-0 on the independent scene, including a knockout win over TUF 14 alumnus Steven Siler. Mendes made his WEC debut in 2010 against fellow top prospect Erik Koch. Mendes showed off superior wrestling winning the fight via unanimous decision. Mendes would continue to show off his wrestling prowess, paving the way to victories over veterans Javier Vazquez, Cub Swanson, and Anthony Morrison. Mendes transitioned over to the UFC where he continued his undefeated streak with dominating decision wins over Michihiro Omigawa and Rani Yahya. Mendes is expected to face Jose Aldo for the featherweight title in 2012.

2011 Breakdown:
Mendes went 2-0 in 2011 winning both fights via unanimous decision.
Mendes made his UFC debut at UFC 126 against Japanese veteran Michihiro Omigawa. Omigawa was considered to be one of the Top 10 fighters in the world following his career resurgence in his native Japan. Mendes quickly established his dominance with solid striking and takedowns, paving the way to a one-sided unanimous decision.
Mendes would go on to face Rani Yahya at UFC 133 in what was thought to be a #1 contender fight. Mendes used superior stand-up to control most of the fight, denying Yahya any chance of locking on a submission.

2012 Forecast:
Mendes has proven that he can beat strikers (Koch, Swanson) and grapplers (Yahya, Vazquez). The big question is if he stands any chance of unseating UFC featherweight champion Jose Aldo in 2012. With the absence of viable contenders in the division, Mendes seems to provide the most legitimate threat to Aldo’s title reign. Mendes has shown consistent growth in his striking skills, though he will need to rely heavily on his wrestling and conditioning to defeat Aldo.