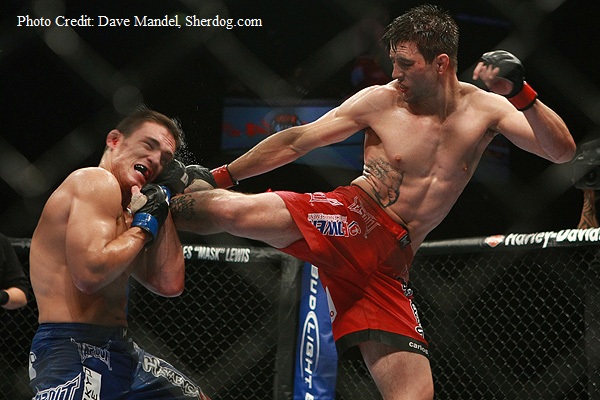 Background:
Carlos Condit was the WEC welterweight champion before becoming a title contender in the UFC. Condit made his MMA debut in 2002, winning his first 8 fights before suffering a setback to Brazilian veteran Carlo Prater. Condit racked up 4 more wins before losing to Japanese submission artist Satoru Kitaoka. Condit went on to sign with Hawaii’s Rumble on the Rock promotion in 2005. Condit defeated veteran Ross Ebanez before partaking in the promotion’s 8-man welterweight tournament. Condit was fairly unknown coming into the tournament, but ended up beating BJJ expert Renato Verissimo and UFC veteran Frank Trigg before finally losing to Jake Shields in the tournament finals. Condit went 3-1 in his next 4 fights before making his way over to the WEC in 2007. Condit won his debut before facing off with John Alessio for the vacant WEC welterweight championship. Condit won the fight via 2nd round submission, earning him his first major title. Condit defended his belt 3 times, while also avenging his previous loss to Prater. Condit was forced to relinquish his title after it was announced the WEC’s welterweight division was being moved to the UFC in 2009. Condit faced Martin Kampmann in his UFC debut, but lost a razor-thin decision. Condit bounced back with two ultra-close wins over Jake Ellenberger and Rory MacDonald. In both contests, Condit was forced to make come-from-behind efforts to earn the victory. Condit won his next two fights in much more decisive fashion, knocking out Dan Hardy and Dong Hyun Kim. Condit was scheduled for a title shot opposite teammate and current champion Georges St.Pierre, but the fight was scrapped due to St.Pierre suffering an injury.

2011 Breakdown:
Condit only fought once in 2011 as he and his opponents fell victim to injuries.
Condit was initially set to face Chris Lytle at UFC 127, but Condit was forced off the card due to injury.
Condit finally made his return against Dong Hyun Kim at UFC 132, scoring a brutal 1st round finish. Condit was able to keep his distance and force Kim to strike with him. Condit ultimately timed a perfectly-placed knee for the knockout win.
Condit was then booked to face B.J. Penn at UFC 137 with the fight likely determining the #1 contender for the welterweight title. Following some missed press events by Nick Diaz, who was set to fight GSP for the UFC welterweight title, Condit was tapped as Diaz’s replacement. The newly-scheduled title fight would not come to fruition as GSP injured his knee. Condit elected to wait for GSP’s return and did not compete at UFC 137.

2012 Forecast:
Carlos Condit’s experience against high-level competition since a very young age has made him one of the most dangerous fighters in the world. Condit is an expert at exposing his opponents’ weaknesses and finishing fights. Condit has been put in danger as of late, nearly losing to Rory MacDonald and Jake Ellenberger. Condit’s recent knockout wins seem to point to Condit hitting his stride. Condit’s finishing skills are the exact traits needed to possibly threaten Georges St.Pierre for the welterweight title. Heading into 2012, Condit will face Nick Diaz for the interim UFC welterweight championship in what should be an exciting, striking war.