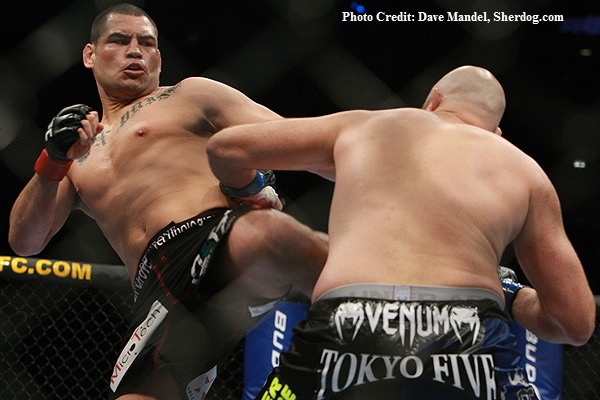 Background:
Cain Velasquez is the former UFC heavyweight champion. Velasquez wrestled collegiately at Arizona State University, twice reaching All-American status. Cain made his mixed martial arts debut in 2006, winning his first 2 fights before signing with the UFC later that year. Cain demolished his first 3 opponents via TKO, defeating Brad Morris, Jake O’Brien, and Denis Stojnic. Velasquez was quickly moving up the UFC heavyweight ranks as he took a step up in competition against Cheick Kongo at UFC 99. Cain relied heavily on his wrestling as Kongo rocked him multiple times throughout the fight. Cain was able to keep Kongo grounded for large majorities of each round and went on to win via unanimous decision. Cain moved on to face veteran Ben Rothwell at UFC 104. Velasquez controlled Rothwell throughout the fight, dominating the IFL veteran with his wrestling and ground ‘n’ pound. The ref eventually stopped the fight in the 2nd round after Rothwell was unable to defend himself. Cain was now set to face PRIDE legend Antonio Rodrigo Nogueira for the #1 contender spot at UFC 110. Cain immediately showed fans that he was a force to be reckoned with, knocking out Nogueira in the 1st round. Cain went on to fight for the title as he faced off against reigning champion Brock Lesnar at UFC 121 Cain once again proved his overall dominance over his peers by finishing Lesnar early in the 1st round with strikes to win the UFC heavyweight title. Cain soon underwent surgery following his championship win and was sidelined for nearly a year before finally defending his belt against #1 contender Junior Dos Santos at UFC on Fox 1. Velasquez’s first title defense did not last long as he was dropped and subsequently finished by Dos Santos.

2011 Breakdown:
Cain Velasquez only fought once in 2011 due to injury, losing his UFC heavyweight championship.
Velasquez came into 2011 as the reigning UFC heavyweight champion. He was also on the mend from rotator cuff surgery that kept him out of action for the majority of the year.
With Velasquez finally healed, he was set to face off against #1 contender Junior Dos Santos at UFC on Fox 1. Velasquez tried to attack Dos Santos with some early leg kicks and a takedown attempt, but Dos Santos stayed patient and stunned Velasquez with a big right hand that sent Velasquez to the floor. Dos Santos immediately pounced, landing a few more punches before the ref stepped in and stopped the fight.

2012 Forecast:
Cain Velasquez was thought to be the next dominant champion of the heavyweight division, but following an injury-riddled 2010, he may have rushed himself in his return back to the cage. Cain is still in the prime of his career, but his skill-set has always been based around his top-level wrestling. Cain has slowly shifted his focus to striking, which though powerful, has gotten him into some trouble due to his chin. Cain was rocked repeatedly in the past by Cheick Kongo, and we all know what happened in his last fight against Dos Santos. For Cain to regain his championship, he will have to return to his wrestling roots and not leave his questionable chin exposed. Cain will likely need to rebuild his confidence in 2012 and get his body back in prime fighting shape.