Notice: Function WP_Scripts::localize was called incorrectly. The $l10n parameter must be an array. To pass arbitrary data to scripts, use the wp_add_inline_script() function instead. Please see Debugging in WordPress for more information. (This message was added in version 5.7.0.) in /var/www/wp-includes/functions.php on line 5835
 Brendan Schaub - Ranking MMA 
Notice: A non well formed numeric value encountered in /var/www/wp-content/themes/mma-sport-magazine/inc/live-style.php on line 40 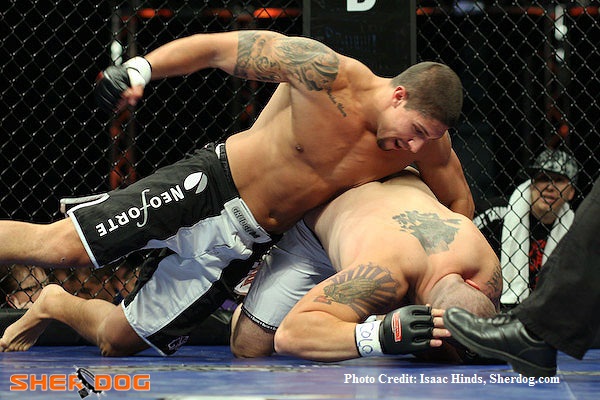 Background:
Brendan Schaub was the runner-up on season 10 of The Ultimate Fighter. Schaub played collegiate football at Colorado University before making his way to MMA in 2008. Schaub quickly ran through his competition on the independent circuit, finishing each of his first 4 opponents via TKO/KO in the 1st round. Schaub was then chosen to participate on season 10 of The Ultimate Fighter. Schaub submitted Demico Rogers in the first round of the competition before impressively knocking out Jon Madsen and Marcus Jones to earn a spot in the finals opposite veteran Roy Nelson. Schaub was unable to win the striking battle against Nelson, eventually being knocked out himself in the 1st round. Schaub would bounce back, winning his next two fights over Chase Gormley and Chris Tuchscherer via 1st round TKO finishes. Schaub took a step up in competition as he faced off against former title contender Gabriel Gonzaga at UFC 121. Schaub used his takedown defense and striking to win a unanimous decision victory. Schaubd move on to face PRIDE legend Mirko Cro Cop at UFC 128. Schaub showed off his speed advantage early as Cro Cop struggled to find his range. In the 3rd round, in was what proving to be a close decision due to a 2nd round point deduction, Schaub finished the fight by knocking out Cro Cop. Schaub was quickly climbing the heavyweight ranks as he looked to take out another legend at UFC 134, this time facing Antonio Rodrigo Nogueira. Schaub looked to be coming into the fight supremely confident, but after finding some early success with strikes he dwas stunned and eventually finished by Nogueira’s punches in the 1st round.

2011 Breakdown:
Schaub fought twice in 2011, facing off against legends Mirko Cro Cop and Antonio Rodrigo Nogueira.
Schaub was initially scheduled to face Frank Mir at UFC 128, but instead ended up facing former PRIDE star Mirko Cro Cop. Schaub tried to use his speed advantage early by darting in and out. They moved to the clinch where Schaub scored a takedown. Schaub landed some solid punches from the top before Cro Cop eventually got back to his feet. Schaub tried for another takedown, but Cro Cop denied it as they each traded a few strikes inside. In round 2, Cro Cop tried throwing out his trademark head kick, but Schaub blocked it. Schaub scored another takedown, but Cro Cop quickly got back to his feet. They traded a few knees from the clinch before the referee stopped the fight to deduct a point from Schaub for landing punches to the back of Cro Cop’s head. Upon the restart, they both landed some strikes from the clinch as the round came to a close. Coming into the 3rd round, it looked close considering Schaub’s point deduction. In round 3, Schaub landed an early takedown, but decided to bring the fight back to the standing position. Cro Cop tried for the head kick, but Schaub defended. Schaub connected on a solid right hand that dropped Cro Cop to the floor. Cro Cop looked finished, but Schaub landed one more big blow before the referee could stop the fight.
Schaub tried to extend his winning streak to 5 as he faced off with Antonio Rodrigo Nogueira at UFC 134 in Brazil. Nogueira tried to initiate the clinch early, but Schaub wisely used his speed and athleticism to bounce away. Schaub began connecting on a few strikes and it seemed to be only a matter of time until he had Nogueira hurt. Nogueira continued to push forward though and landed a huge right hand that had Schuab rocked against the fence. Nogueira began unloading with punches, with a left hand sending Schaub to the floor. Nogueira continued to pound away forcing the referee to stop the fight.

2012 Forecast:
Brendan Schaub was being pushed up the UFC heavyweight ranks thanks to favorable match-ups against fading veterans, but that all came crashing down at UFC 134 against Nogueira. Schaub’s chin has to be a big question mark now that he has been knocked out in each of his two career losses. Schaub talks a big game and has called out the entire division at times, which has not appealed to many seasoned fans. Schaub has a strong set of skills, highlighted by his athleticism, but most opposing strikers are likely licking their chops at the possibility of facing the TUF 10 runner-up. Schaub will need to work on his striking defense and start incorporating a stronger reliance on his wrestling. Hopefully, Schaub will take a step back in 2012 and face some mid-level fighters in the division in order to regain his confidence. It is obvious that he is not ready to be facing the elites of the division as he was claiming before his UFC 134 bout.