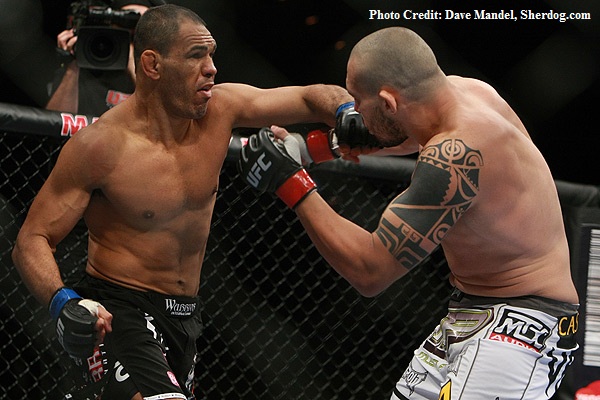 Background:
Antonio Rogerio Nogueira is the twin brother of UFC heavyweight Antonio Rodrigo Nogueira. “Lil’ Nog” has established his own name in the sport by being a world ranked light heavyweight contender for several years in the PRIDE and UFC organizations. Nogueira made his mixed martial arts debut in 2001, winning his first 2 fights before signing with PRIDE. Nogueira easily won his debut via submission over Yusuke Imamura at PRIDE 20. Nogueira would lose his next fight to Vladimir Matyushenko via decision on the independent circuit before returning to PRIDE where he began to solidify himself as on the top fighters in the light heavyweight division by defeating Guy Mezger, Kazuhiro Nakamura, Sakuraba, and Alistair Overeem. Nogueira was 6-0 in PRIDE as he entered the 2003 PRIDE middleweight (205 lbs.) Grand Prix. Nogueira defeated Dan Henderson via submission in the 1st round of the tournament before moving on to face Shogun Rua. In a back-and-forth fight that was deemed Fight of the Year, Rua took home a close unanimous decision despite both men scoring knockdowns in the bout. Nogueira was sidelined for over a year due to injury, before finally returning to earn a TKO victory over Alistair Overeem. Nogueira moved on to face rising prospect Sokoudjou at PRIDE 33, and in a stunning upset, Sokoudjou once again scored a knockout win over a top contender. Following PRIDE’s demise, Nogueira was not signed by the UFC and returned to the independent circuit. Nogueira bounced around promotions, winning his next 5 fights, including a revenge victory over Vladimir Matuyshenko in the Affliction promotion. Nogueira finally signed with the UFC in 2009, making a successful debut against Luiz Cane at UFC 106 by finishing the Brazilian prospect with strikes in the opening minutes of the fight. Nogueira was set to face Forrest Griffin at UFC 114, but ended up facing off against wrestler Jason Brilz. Brilz was able to take Nogueira down throughout the fight and nearly pulled off the upset, but Nogueira was able to walk away with a razor-thin split decision victory. Nogueira was once again pitted against wrestlers in his next two fights as he squared off against rising prospects Ryan Bader and Phil Davis. The fights were close, but Nogueira was unable to work off his back, losing both fights via decision. Nogueira finally got back on the winning track by finishing Tito Ortiz with strikes in the 1st round.

2011 Breakdown:
Nogueira went 1-1 in 2011.
Nogueira was initially set to face Tito Ortiz at UFC Fight Night 24, but following an injury to Ortiz, he ended up facing off against undefeated prospect Phil Davis. Nogueira showed off his improved takedown defense early in the 1st round. Nogueira continually stuffed Davis’ takedown attempts and was eventually able to land a solid left hand that nearly dropped Davis to the floor. Nogueira was unable to fend off Davis’ takedown attempts in the 2nd and 3rd rounds. Davis was content to ride out the clock in top control as Nogueira was unable to mount much offense from his back. It was a close fight, but ultimately Davis’ wrestling earned him a unanimous decision victory.
Nogueira looked to bounce back against Rich Franklin at UFC 133, but Nogueira was forced off the card with a shoulder injury.
Nogueira eventually made his return against Tito Ortiz at UFC 140. Ortiz tried to push the pace early, landing a few punches, as he looked to take the fight to the ground. Nogueira stuffed Ortiz’s takedown attempts and was able to connect on a solid left hand that seemed to have Ortiz hurt. Nogueira swarmed with big punches as Ortiz was unable to fend off the onslaught. Nogueira forced Ortiz to the floor as he continued to land punches and elbows until the ref was forced to stop the fight.

2012 Forecast:
Antonio Rogerio Nogueira’s career has always taken a backseat to his twin brother’s regarding titles and accomplishments, but “Lil’ Nog” has proven to be one of the perennial top light heavyweights to ever grace the light heavyweight division. Nogueira still looks to have some good mileage left on his body, but needs to make his move now if he is ever to contend for a UFC title. Nogueira’s boxing is still some of the best in the division, but his ground game has failed him a bit when facing high-level wrestlers. Nogueira will have to shore up his takedown defense or learn to get up off his back, rather than relying on his guard. With Jon Jones rapidly clearing out the division, Nogueira has a chance to make a run at the title if he can string together some victories in 2012.