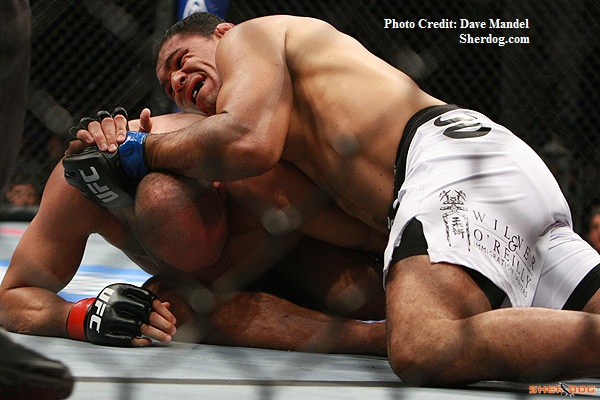 Background:
Antonio Rodrigo Nogueira was the former PRIDE and UFC interim heavyweight champion. Nogueira almost never made it to mixed martial arts as he was struck by a car that nearly ended his life. Nogueira fought through the adversity, which has been a hallmark of his Hall of Fame MMA career. Nogueira, training alongside his twin brother Antonio Rogerio, made his mixed martial arts debut in 1999, quickly building a 5-0 record, including victories over Valentijn Overeem and Jeremy Horn. Nogueira would partake in the Rings 1999 tournament where he defeated Russian Andrei Kopylov before suffering his first career loss to Dan Henderson in a tough, razor-thin decision. Nogueira would find future success in the Rings promotion as he won their 2000 tournament by defeating Valentijn Overeem in the finals. Nogueira would make his PRIDE debut in 2001, impressively submitting his first two opponents, former UFC stars Gary Goodridge and Mark Coleman. Nogueira moved on to compete for the inaugural PRIDE heavyweight championship opposite Heath Herring at PRIDE 17. Nogueira dominated the fight with his striking and grappling, winning a unanimous decision and being crowned the first ever PRIDE heavyweight champion. Nogueira continued to run over his competition, winning his next 5 fights via finish, including victories over Enson Inoue, Sanae Kikuta, Bob Sapp, Semmy Schilt, and Dan Henderson. Nogueira had become a star due to his ability to withstand punishment and pull off fight-ending submissions as he did in his fight with massive K-1 fighter Bob Sapp. Nogueira’s title reign would end in 2003 as he faced Russian phenom Fedor Emelianenko at PRIDE 25. Emelianenko punished Nogueira with ground ‘n’ pound and won a unanimous decision victory to stake claim as the new PRIDE heavyweight champion. Nogueira moved on to face Ricco Rodriguez and won a hotly-contested decision. Nogueira was quickly chosen to face off with Mirko Cro Cop for the PRIDE interim heavyweight title after an injury to Fedor. Despite being punished by Cro Cop’s thundering strikes, Nogueira fought back and stunned the crowd by submitting Cro Cop via armbar in the 2nd round. Nogueira moved on to compete in the PRIDE 2004 heavyweight Grand Prix. Nogueira won his first 3 fights to reach the finals by defeating Hirotaka Yokoi, Heath Herring, and Sergei Kharitonov. In the finals, Nogueira once again clashed with Fedor for the heavyweight title, but the fight was stopped early in the 1st round after Fedor suffered a cut due to an inadvertent headbutt. The rematch would go down 4 months later, though Nogueira donce again struggle against Fedor’s top control and ground ‘n’ pound, losing via unanimous decision. Nogueira would win his next 2 fights before partaking in another PRIDE Grand Prix, this time the 2006 Openweight tournament. Nogueira would easily win his first round fight over Wagner Martins before winning via decision over Fabricio Werdum. In the semi-finals, Nogueira faced off with Josh Barnett and in a back-and-forth fight, Barnett was awarded the split decision victory. Nogueira would later avenge his loss to Barnett in his next and final fight for the PRIDE promotion. Nogueira was signed to the UFC in 2007 and made his much-anticipated debut at UFC 73 against familiar foe Heath Herring. Herring nearly pulled off the upset, rocking Nogueira with an early high kick, but he tunningly did not go in for the finish allowing Nogueira to power back in the fight’s final 2 rounds to win a decision. Nogueira would move on to face Tim Sylvia for the UFC interim heavyweight championship after current champion Randy Couture was involved in a contract dispute with the UFC. Sylvia seemed to be getting the better of the striking throughout the fight, but in the 3rd round, Nogueira once again pulled off a miraculous comeback, submitting Sylvia via guillotine. Nogueira’s next challenge came against former champion Frank Mir at UFC 92 following their coaching stint together on TUF 8. Nogueira was continually beaten to the punch by Mir and eventually finished via 2nd round TKO, which was his first career loss via stoppage. Nogueira would later reveal that he was battling a staph infection. Nogueira bounced back with a unanimous decision victory over fellow legend Randy Couture at UFC 102. The fight was filled with momentum swings and easily captured Fight of the Night honors. Nogueira was back in title contention as he squared off against rising prospect Cain Velasquez for the #1 contender spot at UFC 110. Nogueira was quickly finished via knockout in the 1st round. Nogueira would undergo multiple surgeries following his loss while rumors swirled about his potential retirement. Nogueira vowed to return at UFC 134 in Brazil as he was eventually booked to face TUF 10 runner-up Brendan Schaub. Most felt Nogueira was rushing back from his injuries, but come fight night, Nogueira pulled off the unbelievable upset by knocking out Schaub in the 1st round. Nogueira looked to avenge his previous loss to Frank Mir in his next bout at UFC 140. Nogueira had Mir rocked with punches early in the 1st round, but got a little careless and allowed Mir to turn the tides by locking on a kimura that forced the referee to stop the fight.

2011 Breakdown:
Nogueira fought twice in 2011, going 1-1 overall, as each bout ended in highlight-reel fashion.
Nogueira was sidelined for most of 2011 as he continued to recover from knee and hip surgeries.
Nogueira pledged his participation at UFC 134 in Brazil and held true to his word as he faced off with rising contender Brendan Schaub. Many experts felt Nogueira had little chance coming into the fight due to his injuries and age. Nogueira pushed forward early and initiated the clinch. Schaub stepped away and looked to land strikes from the outside. Schaub began to take control with his punches and leg kicks, but Nogueira continued to press forward. Nogueira scored a huge right hand that looked to have Schuab rocked. Nogueira continued firing off big punches, with a left hand finally dropping Schaub to the floor. A few punches later and the referee was forced to stop the fight, delivering an improbable knockout finish victory for Nogueira as the Brazilian crowd went wild.
With a renewed lease on his UFC career, Nogueira had revenge on his mind as he was booked opposite former rival Frank Mir at UFC 140. Nogueira tried to push forward early with strikes as they moved to the clinch against the fence. Mir muscled Nogueira down, but Nogueira popped back up to his feet. Nogueira scored with a few punches inside before breaking apart. Nogueira landed a big combination that seemed to rock Mir. Nogueira continued to fire away as Mir dropped to the floor. Nogueira applied a guillotine, but Mir somehow reversed positions, now claiming side control. Mir locked on a kimura while Nogueira desperately tried to free his arm. Mir continued torquing the hold until Nogueira’s arm popped, forcing the referee stoppage.

2012 Forecast:
Antonio Rodrigo Nogueira was supposed to be retired in 2012, or so said his detractors coming into his UFC 134 bout opposite Brendan Schaub. Nogueira proved that he still has a couple of good years left before he hangs up the gloves. The surgeries have seemed to grant Nogueira a bit more mobility, but time will tell if his body can continue to respond to hard training sessions. Nogueira should be out for most of 2012 due to his arm injury suffered against Frank Mir. Hopefully, the time away from the cage will allow Nogueira’s body time to heal. He has proven that his striking is still a threat to opponents, and we all know how good his ground game is. With Nogueira’s friend and training partner, Junior Dos Santos, currently at the top of the heavyweight division, it will remain to be seen what type of fights the UFC will book for him. Hopefully, the UFC will avoid pitting him against up and coming prospects and give him the opportunity to continue and build upon his already impressive legacy.