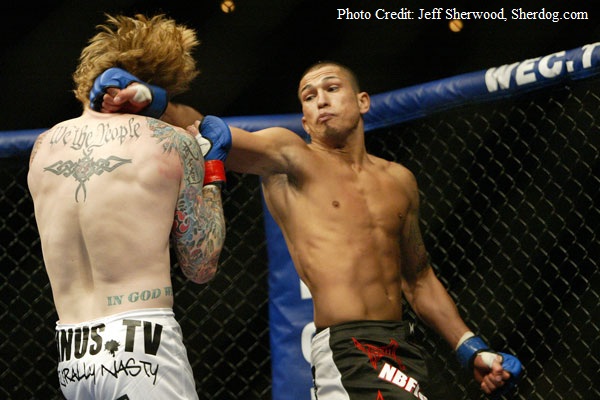 Background:
Anthony Pettis will go down in the history books as the last man to hold the WEC lightweight championship. Pettis began his mixed martial arts career in 2007, debuting on his 20th birthday. Pettis quickly racked up 8 straight wins on the independent circuit before signing with the WEC in 2009. Pettis won his debut against Mike Campbell before losing a controversial decision to veteran Bart Palaszewski. Pettis bounced back, collecting 3-straight wins all via finish over Danny Castillo, Alex Karalexis, and Shane Roller. The win streak earned him a shot at the title against reigning champion Ben Henderson. Pettis and Henderson battled back-and-forth for 5 rounds, ultimately capped off by Pettis’ Showtime Kick, which allowed him to squeak out the unanimous decision and stake claim to the WEC lightweight championship. Pettis transferred over to the UFC shortly thereafter where he was promised an immediate title shot against the UFC’s lightweight champion. Unfortunately for Pettis, UFC champion Frankie Edgar and challenger Gray Maynard fought to a draw at UFC 125, which forced the UFC to book a rematch. Pettis decided not to wait for his title shot and faced off against Clay Guida. Guida used his wrestling to stifle Pettis’ striking arsenal winning via unanimous decision. Pettis was forced to restart his journey towards earning another title shot following the loss. Pettis moved on to win his next fight, defeating Jeremy Stephens via split decision.

2011 Breakdown:
Pettis went 1-1 in 2011.
Pettis initially entered the UFC as the reigning WEC lightweight champion with a promised title shot against the winner of Frankie Edgar and Gray Maynard. Unfortunately for Pettis, Edgar and Maynard fought to a draw leading to an immediate rematch, forcing Pettis to bide his time. Rather than waiting, Pettis risked his title shot to fight Clay Guida at the TUF 13 Finale.
Guida used his takedowns and top control to continually stifle Pettis’ striking attack, ultimately winning a unanimous decision despite landing any significant offense of his own.
Pettis moved on to face fellow striker Jeremy Stephens at UFC 136. The fight was close early, but Pettis surprisingly took Stephens down and was able to control Stephens in most of the grappling exchanges, earning a tough split decision victory.

2012 Forecast:
At just 24 years of age, Pettis has future champion written all over him. Pettis’ striking arsenal is continually improving under the tutelage of Duke Roufus, and that is scary considering his current abilities. Pettis also has one of the most active guards in the sport, so he is a threat anywhere the fight goes. Pettis obviously learned that his takedown defense and overall wrestling ability will need work in order to avoid another upset against a high-level wrestler. It should be noted that Pettis is a smaller lightweight and could potentially make the cut to featherweight should he struggle in the UFC lightweight division.