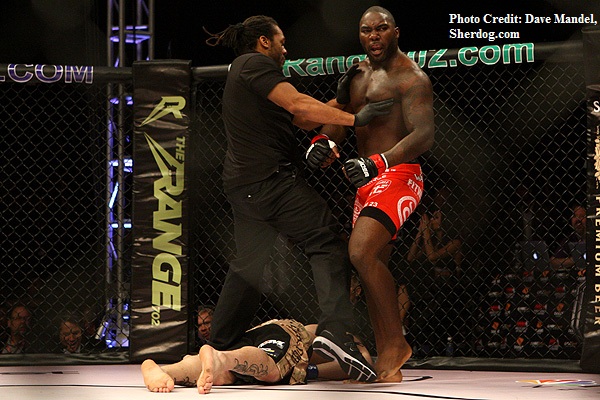 Background:
Anthony Johnson is moving to middleweight in 2012 even though he was quickly rising up the ranks of the UFC welterweight division. Johnson is known for his extreme weight cuts, having missed weight twice in the past. Johnson made his mixed martial arts debut in 2006 winning his first 3 fights before begin signed by the UFC in 2007. Johnson was considered to be a virtual unknown in the MMA world upon his UFC debut, but he quickly changed that by knocking out Chad Reiner in thirteen seconds. Johnson stumbled in his next fight against veteran Rich Clementi as he badly missed weight by 7 pounds. Johnson had Clementi badly rocked earlier in the fight, but soon lost via submission. Johnson bounced back with a vicious knockout of TUF 6 runner-up Tommy Speer. Johnson moved on to face Kevin Burns at UFC Fight Night 14 in a fight that ended in controversy. Johnson was on his way to an easy victory over Burns despite being repeatedly poked in the eye by Burns’ open-handed jab attempts. In the 3rd round, with less than 2 minutes left in the fight, Burns poked Johnson again, forcing Johnson to turn his back. The ref mistakingly thought it was due to a punch and waved off the fight. The ruling was strangely not overturned as Johnson suffered legitimate damage to his eye. Johnson soon got his revenge on Burns later in the year as he knocked him out with a head kick at the TUF 9 Finale. Johnson moved on to impressively finish Luigi Fioravanti via 1st round TKO, but soon found himself in hot water again after missing weight by 6 pounds for his scheduled fight with Yoshiyuki Yoshida at UFC 104. Yoshida agreed to fight anyways, but the size difference was immediately apparent come fight night as Johnson viciously knocked Yoshida out in the 1st round. Johnson took a huge step up in competition as he faced off against Josh Koscheck at UFC 106 just a few weeks after his win over Yoshida. After a close 1st round, Koscheck was able to score the takedown and control Johnson on the ground with punches, eventually sinking in the rear-naked choke for the win. Johnson would be sidelined for all of 2010 as he underwent knee surgery. Johnson’s weight continued to be a subject of debate as he hovered above 200 pounds. Johnson eventually made his return, still competing as a welterweight, against recent title contender Dan Hardy. Johnson controlled the fight with his wrestling and top control, easily winning the unanimous decision victory. Johnson moved on to knock out Charlie Brenneman at UFC Live 6, once again positioning himself for a run at the UFC welterweight title. The UFC and Johnson had other plans in mind though as Johnson will be making his long-awaited middleweight debut in 2012.

2011 Breakdown:
Johnson fought twice in 2011 as a welterweight, winning both fights before announcing his move to 185 lbs.
Johnson returned from knee surgery to face off against Dan Hardy at UFC Fight Night 24 in the co-main event. Pre-fight banter seemed to hint that this fight would end via knockout, but Johnson surprisingly came out and stuck to an effective gameplan heavily predicated on wrestling. Johnson routinely muscled Hardy down to the floor where he controlled much of the action with his smothering top control. Johnson nearly finished Hardy in the final round with various submission attempts, but ended up settling for a one-sided unanimous decision victory.
Johnson was then set to welcome Nate Marquardt to the welterweight division at UFC Live 4, but suffered an injury and was forced off the card.
Johnson ended up facing Charlie Brenneman at UFC Live 6 with Brenneman fresh off an upset victory over rising contender Rick Story. Johnson dominated the fight with his striking as he defended Brenneman’s desperate takedown attempts. Johnson eventually finished Brenneman with a lethal head-kick that earned him Knockout of the Night honors.
It was soon announced that Johnson would be moving up to the middleweight division for his next fight.

2012 Forecast:
Johnson finally has decided to appease his critics by moving up a weight class. Johnson had repeatedly missed weight and has made no secret of his severe weight cuts. Johnson’s decision to remain at welterweight over the last few years have been mixed with disdain from many within the mixed martial arts community. No one can argue Johnson’s physical gifts and knockout power. His wrestling is also a forgotten asset that he showed off in his win over Hardy. Johnson will likely find middleweight a much more ideal weight class for his body type. He may not be as physically dominant as he was at 170 lbs., but his overall conditioning and speed should improve. Johnson will likely be a top contender in the division as long as he is able to avoid submissions and being put on his back. With Anderson Silva’s pending retirement and the advanced age of many of the current top contenders at middleweight, Johnson could quickly become a force to be reckoned with.