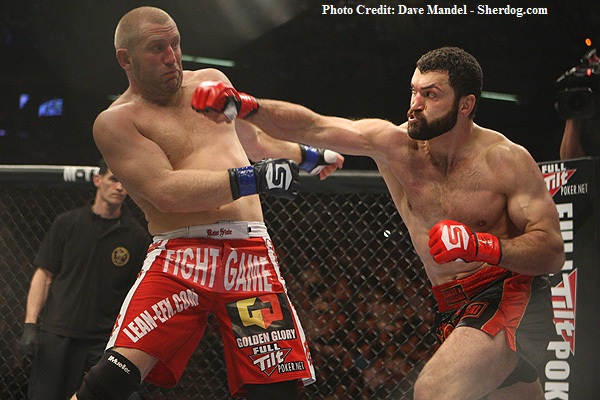 2012 Forecast:
Andrei Arlovski once stood as the UFC’s prized heavyweight star, but those days seem long forgotten as Arlovski has struggled to maintain his status as an elite fighter. Arlovski has suffered 7 knockout losses in his career, 3 of which have come in his last 7 fights. Fans have begun calling for Arlovski to retire, but he has shown a desire and willingness to still give it one last run at making it back to the top.

Arlovski was on an amazing run prior to his knockout loss to Fedor. He racked up wins over Roy Nelson, Ben Rothwell, and Fabricio Werdum that once again merited his consideration as one of the top heavyweight fighters in the world. He held his own against Fedor before being knocked out cold. What really may have ended Arlovski’s career as a top-flight contender though was his stunning loss to formerly unknown heavyweight Brett Rogers. Arlovski’s chin was just not holding up to his competition’s power. His chin did hold up in his next fight with Antonio “Bigfoot” Silva, but against Sergei Kharitonov the same concerns returned and fans were generally concerned with Arlovski’s overall long-term health.

Arlovski may still be capable of becoming a contender in the UFC or Bellator, but he is going to be hard-pressed to earn a shot there unless he can truly show he can take a punch. There are plenty of interesting match-ups still left on the table for Arlovski’s career, but the question is do fans really want to see him fight again.