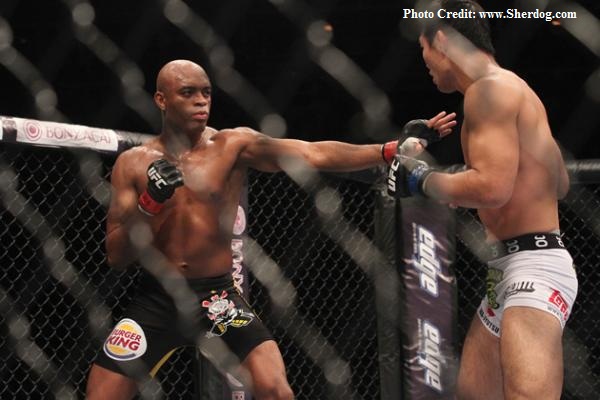 Background:
Anderson Silva is the p4p top fighter in the world. He quite possibly could go down as the greatest fighter in mixed martial arts history when it is all said and done. Silva is currently the reigning UFC middleweight champion, having defended his title an unprecedented 9 times. Silva began his mixed martial arts career in his native Brazil back in 1997. Silva took part in a 4-man tournament, which he won, defeating future UFC veteran Fabricio Camoes in the finals. Silva suffered his first career loss to future PRIDE fighter and fellow Brazilian Luiz Azeredo. Silva bounced back and forth between the Brazilian independent circuit and Japan’s Shooto organization for the next couple of years where he won his next 6 fights including a victory over Hayato Sakurai for the Shooto middleweight championship. Silva w eventually signed with PRIDE in 2002 where he won his first 3 fights decisively before being stunningly submitted by Daiju Takase. Silva returned to the independent circuit, going 3-0, including wins over Jeremy Horn and Lee Murray before resuming his career in Japan. Silva lost his second straight fight in PRIDE, succumbing via submission to Ryo Chonan. Silva left PRIDE shortly thereafter as he moved on to defeat UFC veterans Jorge Rivera and Curtis Stout before traveling to Hawaii to take part in their welterweight tournament. Silva was eliminated in the 1st round after he was disqualified for an illegal upkick that left Okami unable to continue. Silva competed once more on the independent circuit, defeating Tony Fryklund before signing with the UFC in 2006. Silva was immediately thrown into a high-profile fight against surging TUF 1 middleweight Chris Leben. Silva completely dismantled Leben in less than a minute, earning himself a UFC title shot in just his second fight with the promotion. Silva went on to win the UFC middleweight title by knocking out reigning champion Rich Franklin in the 1st round with brutal knees that left Franklin’s nose badly broken. Silva moved on to defeat Travis Lutter, though he had a few scares on the ground in the 1st round. Lutter eventually gassed out and was finished in the 2nd round. The fight was deemed a non-title bout since Lutter missed weight. Silva went on to dominate Nate Marquardt and Rich Franklin before facing off against fellow legend Dan Henderson at UFC 82. Henderson held his own in the 1st round, but Silva soon connected on a few strikes before submitting the former PRIDE champion. Silva, having seemingly swept through the UFC middleweight division moved up in weight to face James Irvin. Silva finished Irvin in the opening minute of the fight, opening up a huge gash on Irvin’s skull. Silva began to grow disinterested with his lack of opposition, openly epressing his desire for a matchup with Roy Jones Jr. in the boxing ring. Instead, Silva easily defeated overmatched Patrick Cote and Thales Leites before once again making a venture up to light heavyweight. Silva tested his skills against former UFC light heavyweight champion Forrest Griffin at UFC 101, easily dismantling and embarrassing Forrest with his quickness and striking on way to a 1st round knockout. Silva moved on to defend his title against BJJ ace Demian Maia in Abu Dhabi at UFC 112 in what turned out to be another frustrating fight for Silva fans as he refused to go in for the finish after having Maia badly hurt in the opening rounds. Silva was still considered the top fighter in the game, but his recent middleweight title defenses lacked suspense and intrigue. His next challenger, Chael Sonnen, provided Silva with everything he was missing as he pushed Silva like never before, bashing him in pre-fight interviews and lighting a fire under the usually calm champion. Sonnen stunningly held his own in the striking department against Silva and controlled most of the first 4 rounds with his wrestling and top control. Sonnen was just minutes away from pulling off one of the greatest upsets in UFC history until Silva caught Sonnen in a triangle forcing Sonnen to tap. Silva moved on to face Vitor Belfort at UFC 126 in a pairing of two of the most exciting strikers in the sport. Silva won the fight by landing a devastating front kick that knocked Belfort out cold. Silva defended his title once more in 2011, avenging his disqualification loss to Yushin Okami.

2011 Breakdown:
Silva successfully defended his UFC middleweight title two times in 2011.
Silva’s first title defense of the year came against fellow Brazilian Vitor Belfort at UFC 126. After some bitter pre-fight words between the two legends, the two fighters began exchanging heavy strikes that were just missing their target. Seconds later, Silva flicked out a front kick that crumbled Belfort to the floor. Silva flew in with two more punches and the ref was forced to step in and stop the fight.
Silva moved on to face the last man that had scored a victory over him, albeit via disqualification. Japanese contender Yushin Okami was finally given a title shot after being skipped over a year prior. Silva faced Okami at UFC 134 in front of his hometown crowd of Brazil. Silva kept loose in the 1st round, dancing around Okami and continually feinting and flicking out strikes. Okami tried to close the distance, but seemed too cautious of Silva’s immense striking advantage. Silva finally unleashed his flurries towards the end of the 1st round and everyone could sense it was only a matter of time until Okami was going down. In the 2nd round, Okami tried to come out aggressive, but Silva continued to toy with Okami on the feet. Silva was completely unthreatened by Okami’s punches as he moved around the cage with his hands down. Silva finally connected on a clean right hand that dropped Okami. Silva pounced with strikes until the ref was forced to step in and stop the fight.

2012 Forecast:
Silva is without question the top pound-for-pound fighter in the world today. The only man to truly challenge him was Chael Sonnen, and it is well-known that Sonnen was suspended following the fight for using TRT. A few rematches may be on the horizon with Sonnen, Belfort, or Henderson, but there is a strong likelihood that Silva may be considering retirement. Silva is 36 years old and although it seems as if Silva is still in his physical prime, his speed and strength will likely continue to diminish. Silva has also struggled with injuries in the last couple of years. With the UFC’s recent expansion into Brazil, Silva is becoming more of a mainstream star in his home country, so he may have extra incentive to continue showcasing his dominance in front of his Brazilian fans. Dream match-ups with Georges St.Pierre or Jon Jones are unlikely due to Silva’s age and injuries.