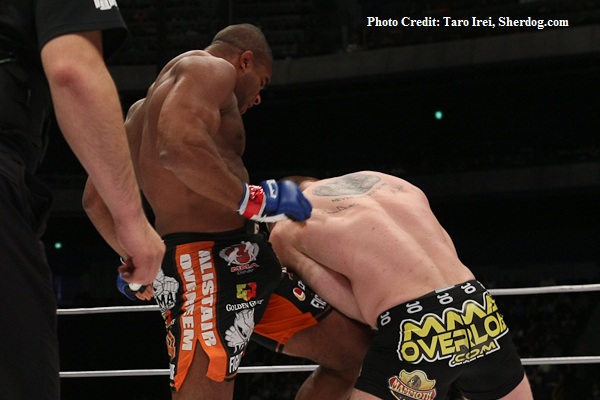 Background:
Alistair Overeem was the reigning Strikeforce and Dream heavyweight champion before signing with the the UFC in 2011. Alistair, training alongside his brother, Valentijn, made his mixed martial arts debut in 1999. Overeem compiled a 10-3 record on the independent circuit before making his debut in PRIDE in 2002. Overeem won his first 3 PRIDE fights against overmatched competition before participating in the 2003 middleweight (205 lbs.) Grand Prix tournament. Overeem, now riding a 12-fight win streak, faced off against the UFC’s Chuck Liddell in the 1st round. Overeem suffered a 1st round knockout loss to eliminate him from the tournament. Overeem bounced back with 3 straight wins, including a 2nd round TKO over Japanese veteran Hiromitsu Kanehara. Overeem moved on to face Antonio Rogerio Nogueira at PRIDE 29, but lost via unanimous decision. Overeem’s career soon found success as later that year he entered the 2005 PRIDE middleweight (205 lbs.) Grand Prix. Overeem scored upset victories over veterans Vitor Belfort and Igor Vovchanchyn, finishing each via 1st round guillotines to reach the semi-finals before losing to eventual winner Shogun Rua. Following the loss, Overeem moved up to the heavyweight division, where he stunned heavy-handed striker Sergei Kharitonov via 1st round TKO. Overeem seemed to be coming into his own, but he continued to struggle with his conditioning and what was proving to be a difficult weight cut to 205 lbs. Overeem would go 2-5 in his next 7 fights, losing to top contenders Fabricio Werdum, Antonio Rogerio Nogueira, Ricardo Arona, Shogun Rua, and a rematch with Sergei Kharitonov. Following PRIDE’s demise, Overeem found new homes in the Strikeforce and Dream promotions. Overeem won the Strikeforce heavyweight championship by finishing Paul Buentello via strikes in the 2nd round. Overeem also began finding success in K-1 where he continued to develop his striking skills. Overeem was noticeably putting on muscle as he began to establish himself as legitimate heavyweight force. Overeem amassed a 7-fight win streak, highlighted by a submission win over Mark Hunt in 2008. Overeem had not defended his Strikeforce heavyweight championship since winning it back in 2007, but finally returned to easily dismantle Brett Rogers via 1st round TKO. Overeem went on to win the K-1 world grand prix before also claiming the Dream heavyweight championship by knocking out former UFC prospect Todd Duffee. Overeem’s status was quickly growing as fans clamored for him to compete against top-level competition. Overeem entered the Strikeforce heavyweight Grand Prix in 2011, facing off against former PRIDE rival Fabricio Werdum. Overeem would win the fight via unanimous decision as both men were cautious of each other’s respective talents. Strikeforce was attempting to set up the next round of the tournament, but Overeem voiced his desire for additional time due to injuries. Strikeforce denied his request, thus forcing Overeem to leave Strikeforce and the tournament. Overeem later signed with the UFC following a much-publicized fallout with Strikeforce and Overeem’s management. Both sides eventually found mutual ground and Overeem would make his debut at UFC 141 against former champion Brock Lesnar in a #1 contender fight for the UFC heavyweight championship. Overeem stuffed Lesnar’s early takedown attempts before unleashing his powerful knees to finish Lesnar via TKO.

2011 Breakdown:
Overeem fought twice in 2011, winning both bouts including his UFC debut.
Overeem, the reigning Strikeforce and Dream heavyweight champion, agreed to partake in Strikeforce’s Heavyweight Grand Prix tournament.
Overeem faced off with familiar opponent and ground specialist Fabricio Werdum in the first round of the tournament. Werdum tried to get inside early as he looked for any opportunity to take Overeem down to the floor. Werdum tried to flurry forward and then shoot, but Overeem continued to deny Werdum the takedown. Overeem landed a solid left hand as Werdum tried to pull guard. Overeem finally followed Werdum to the floor, settling into top position where he landed an elbow strike before the round came to a close. In the 2nd round, Werdum continued to push forward behind strikes. Werdum connected on a couple of solid knees, but was once again denied the takedown. Overeem responded with a left hand and then a combination that had Werdum constantly flopping to the floor. The 3rd round saw Werdum flurry forward with mild success. Werdum soon abandoned his striking to pull guard. Overeem took top position for awhile, but not much action was coming from either men. The ref restarted them a couple of times with the same sequence of events occurring. Overeem eventually went on to win via unanimous decision.
Overeem was set to advance in the tournament, but instead voiced his preference for a later bout date due to injuries. Strikeforce did not allow Overeem a later fight date and instead replaced him with an alternate. Overeem would be released from Strikeforce following issues between his management and Zuffa.
Overeem eventually signed with the UFC and was set to make his debut against former UFC champion Brock Lesnar at UFC 141 for the #1 contender spot in the heavyweight division. Lesnar tried to shoot for a takedown early, but Overeem was able to evade the attempt. Overeem connected with a knee to the body before pressuring Lesnar up against the cage. Overeem continued to score with knee strikes as both fighters worked in a few strikes inside. Overeem then landed a thundering kick to the body that sent Lesnar to the floor. Lesnar covered up as Overeem score with punches, eventually forcing the referee to stop the fight.

2012 Forecast:
Alistair Overeem is thought to be the best striker in all of mixed martial arts. This will be put to the test when he squares off against UFC heavyweight champion Junior Dos Santos in 2012. Overeem’s dominance over the last few years has been remarkable. For him to find success in K-1 has proven that this is a completely different version of Overeem that fans saw in PRIDE. Overeem has not faced top-flight competition during his rise up the ranks until just recently. Overeem is still just 31 years old with a ton of big-fight experience. The expectations are high for Overeem to provide a stiff challenge for Dos Santos.