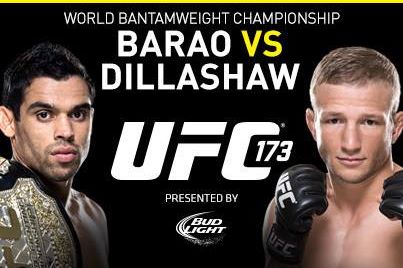 Renan Barao (-800) vs. T.J. Dillashaw (+550)
T.J. Dillashaw is a legitimate threat to anyone in the division, except Renan Barao. Barao has been absolutely dominant in his last 6 fights. Dillashaw brings the necessary wrestling and physical tools to give Barao a solid fight, but there are just too many ways that Barao can finish this fight.
Prediction: Barao via Submission

Daniel Cormier (-900) vs. Dan Henderson (+600)
Cormier is the biggest favorite on the card for good reason. He has youth, speed, wrestling, and 27 fights of less damage on his resume. Henderson is still hanging on valiantly to his Top 10 status, but outside of his big right hand, and miraculous recovery abilities, he’s going to be hard-pressed to land that one big punch. Though Cormier finishes his last fight, he had been in sort of a rut letting his hands go. This could be the case in this fight as well as he likely doesn’t want to give Henderson an opportunity to land the Hendo Bomb.
Prediction: Cormier via Decision

Robbie Lawler (-220) vs. Jake Ellenberger (+180)
For many fans this is a pick’em type fight. They both have one-punch KO power, and are capable wrestlers with minimal submission abilities. Ellenberger has been somewhat cautious ever since losing to Martin Kampmann back in 2012. For the first time, Ellengerger was stopped by strikes and he is likely going to be looking to avoid the wrath of Lawler’s power. Ellenberger is probably the more technical striker, but does he really want to duplicate his abysmal performance against Rory MacDonald to win a close decision? Lawler has looked like a beast on the feet, but he has been beat on his feet fairly recently by Lorenz Larkin and a stunning loss to Babalu Sobral. Lawler needs to be aggressive and press the action. He can’t allow Ellenberger to use his movement and land timely takedowns. This fight’s outcome will really come down to whether Ellenberger is looking to engage or not. If he plays it safe, he wins via decision, if not, I have to go with Lawler’s brawling style.
Prediction: Lawler via Decision

Takeya Mizugaki (-165) vs. Francisco Rivera (+145)
Mizugaki is a slight favorite over the big-puncher Rivera. Rivera is unproven against Top 10 competition, though he did lose via 1st round TKO to Erik Koch at Featherweight back in the WEC. The fact is Rivera has the necessary KO power to end this fight quick, but Mizugaki has made it his penchant to roll with the punches and somehow, someway squeak out decisions. They do share one common opponent in Reuben Duran, who Mizugaki beat via decision, while Rivera lost via submission. Rivera’s ground game is not his strongsuit, and Mizugaki’s wrestling has improved. Ultimately, this fight could come down to which fighter has the better conditioning. Rivera loads up on his punches, and has been known to tire down. It’s going to be a close fight, but I have to lean on experience here.
Prediction: Mizugaki via Decision

Jamie Varner (-185) vs. James Krause (+160)
Both fighters are looking to rebound after being finished in their last fights. Krause’s loss to Bobby Green ended controversially, but nonetheless, this is a big opportunity to rebound against the former WEC champion. Varner’s upset win against Edson Barboza in 2012 made some people believe he still had the skills necessary to be a Top 10 fighter, but we’ve quickly seen that Varner still lacks the discipline to win consistently. He’s 1-3 in his last 4 fights, though it should be noted that he was winning each contest at some point in time. Varner just struggles to put together a full 3-round fight. That should open the door for Krause to use his length and quickness to possibly pull off the upset. Krause looked super-impressive against Sam Stout, and thought Stout has struggled as of late, it was a decent glimpse of what Krause is capable of. I can definitely see him getting rocked earlier, or put on his back, but at some point, Krause is going to have an opening to land his own shots or grab hold of a limb. Varner’s submission defense and chin are in question, so for that reason, I’m leaning towards Krause.
Prediction: Krause via Submission