Notice: Function WP_Scripts::localize was called incorrectly. The $l10n parameter must be an array. To pass arbitrary data to scripts, use the wp_add_inline_script() function instead. Please see Debugging in WordPress for more information. (This message was added in version 5.7.0.) in /var/www/wp-includes/functions.php on line 5835
 TUF Brazil 3: Preview and Predictions - Ranking MMA 
Notice: A non well formed numeric value encountered in /var/www/wp-content/themes/mma-sport-magazine/inc/live-style.php on line 40 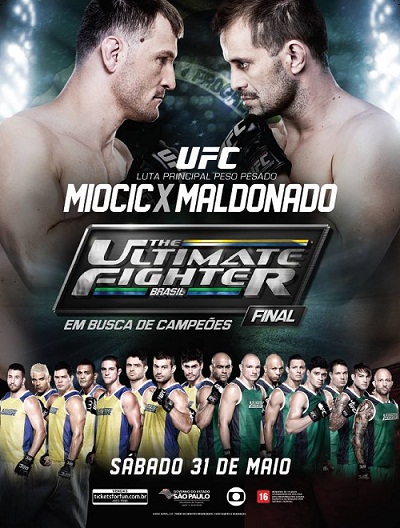 Stipe Miocic (-500) vs. Fabio Maldonado (+400)
Maldonado is as gutsy as they come, but he may be pressing his luck too much against a Top 10 Heavyweight like Stipe Miocic. Maldonado has fought at Heavyweight during his career on the regional circuits of Brazil, but it was against less than stellar competition. The one thing Maldonado has going for him is that he knows how to box. He punches in bunches and is extremely good at attacking the body. If somehow Maldonado can avoid being knocked out or taken down, it’s not without reason to believe that Maldonado could turn the tide in the later rounds. The problem is I don’t think it’s going get there. Miocic has made improvements since his only career loss to Stefan Struve. He’s a solid boxer himself with underrated wrestling skills. Miocic should be able to control where this fight takes place and brutalize Maldonado with heavy punches.
Prediction: Miocic via TKO

Antonio Carlos (-180) vs. Vitor Miranda (+140)
When this season of TUF Brazil started, I made the prediction that the winners of the show would be Antonio Carlos and Warlley Alves. I don’t mean to toot my own horn, but both fighters look as if they are going to make that prophecy come true. I really like Vitor Miranda. He is a veteran of the sport with great striking, and after losing his son a few years back, part of me is hoping for a storybook ending for the Team Nogueira product. Yet, Antonio Carlos has been a can’t-miss prospect ever since leaving the mats of BJJ for MMA. He’s developed some decent boxing under the tutelage of Luiz Dorea (Junior dos Santos’ coach), and has natural KO power. We saw firsthand how quickly Carlos is coming into his own on TUF Brazil. He beat 3 of Brazil’s top big men, and finished each of them with relative ease. Miranda should be his toughest foe to date, but Carlos is just too fast and his submission game is just way too good. The only way I see Miranda winning this is if Carlos got sloppy with his striking or ran out of gas in the 2nd or 3rd rounds. Carlos has been a quick finisher, so if there was a question mark, it’s his gas tank.
Prediction: Carlos via Submission

Warlley Alves (-230) vs. Marcio Alexandre (+170)
I watched every episode of TUF Brazil 3, and feel fairly confident picking the winner of this fight. Both fighters are probably natural Welterweights despite competing as Middleweights on the show. Alves has proven to be a top-level prospect with excellent fighting instincts. Marcio “Lyoto” Alexandre does mirror Lyoto Machida’s wide stance striking style, but his conditioning is downright horrible. Alexandre will be dangerous for the 1st round of the fight, but I expect him to quickly tire down as he attempts to deal with Alves’ quickness. This is still a tricky fight to pick based on the continued growth of each fighter, but I am continually pulled back to Alves’ impressive decision win over Wendell Oliveira to get into the TUF house. Oliveira is considered to be on of the top Brazilian fighters outside the UFC, but Alves handled him like a proven veteran.
Prediction: Alves via Decision

Demian Maia (-530) vs. Alexander Yakovlev (+350)
Demian Maia may have been one fight away from a title shot prior to his main event bout against Jake Shields. Maia was stunningly out-grappled by Shields that night, and has since dropped another fight to Rory MacDonald. There’s no shame in losing to Shields or MacDonald, but time is running out on Maia to fight for a title once more. Maia should be able to get back on the winning track against Yakovlev, who is making his UFC debut. Yakovlev is a well-rounded fighter that is light on his feet with capable wrestling and submissions. Yakovlev recent out-pointed Paul Daley on the regional circuit, so he has faced proven competition, yet Maia and Daley are two polar opposite fighters. Maia is likely too strong on the ground for Yakovlev to possible pull off the upset.
Prediction: Maia via Decision

Rony Jason (-310) vs. Robbie Peralta (+230)
Rony Jason is probably Brazil’s most popular fighter to come off its version of The Ultimate Fighter. The Featherweight winner of TUF Brazil 1 is 4-1 thus far in the UFC with his only loss coming to Top 10 fighter Jeremy Stephens. Jason’s loss to Stephens was a huge shocker, considering how brutally Jason was knocked out. Jason has always been an aggressive, emotionally-fueled fighter, and I feared that Jason would never be the same fighter afterwards. Yet, in his next fight, Jason dispelled those fears as he earned an early stoppage over a very tough, durable Steven Siler. Peralta is no slouch, but after losing to Akira Corassani, his respectability as a top fighter took a big hit. The huge mismatch in this fight is Jason’s ground game compared to Peralta’s. If Jason keeps the fight standing, he should have the power and speed advantage as well, but that would allow Peralta to have a puncher’s chance. Hopefully, Jason fights smart, and uses his jiu-jitsu.
Prediction: Jason via Submission