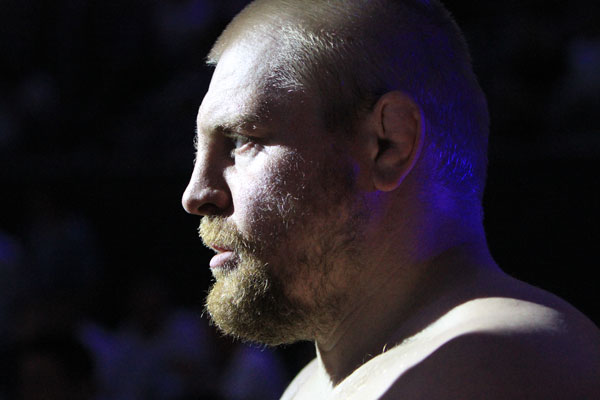 Outside the Octagon – Volume 5

Every week, I will be providing some of the best fights not happening under the UFC or Bellator banner.

Two Top 25 Heavyweight prospects square off in what should be a classic battle of striker vs. wrestler. Mocco is well known to wrestling fans after winning the 285 lbs. NCAA Championship and competing in the 2008 Olympic games. Mocco has been primarily training at American Top Team and recently picked up his biggest win to date, defeating Lew Polley via decision. His opponont, Smealinho Rama is considered to be Canada’s top Heavyweight prospect, but he is still very raw. Rama has KO power and submission skills, but thus far, he’s been largely untested against a top level wrestler.

Cosmo Alexandre fights for the first time outside of the Bellator cage following his release in 2013. Alexandre has not competed in MMA since 2012, though he did compete in a kickboxing bout in 2013. Alexandre trains out of the Blackzilians, and is widely considered to be one of the top strikers in the sport. Alexandre was originally scheduled to face Anselmo Luna, but Luna pulled out last minute and is now replaced by journeyman Rey Trujillo.

Damacio Page’s career has been in a complete freefall ever since his title contention days in the WEC. Page is just 1-5 in his last 6 fights and was released by the UFC in 2012 after going 0-3 in the octagon. Page returned to the independent circuit for the fight time since 2008, impressively knocking out undefeated Patrick Ybarra. Unfortunately, Page could not duplicate the result as he lost his next fight via decision. Page’s opponent, Matthew Lozano, is not a household name, but he has competed in Legacy FC and a couple of Bellator undercards. Lozano has mostly competed as a Flyweight, and holds wins over tough prospects Dave Morgan and Matt Rizzo.

It wasn’t that long ago that Hiroyuki Takaya was considered to be one of the top Featherweights fighters after dethroning Dream Featherweight champion Bibiano Fernandes. Takaya’s career has been a struggle ever since as he’s gone just 2-3-1 in his last 6 fights. Takaya will look to rebound from his last fight in the Vale Tudo Japan promotion as he faces off against Yojiro Uchimura, who recently fought to a draw with Bellator’s Marlon Sandro.

Caol Uno’s career was all but over following a 1-6-1 record from 2008-2012. Yet, Uno has made a triumphant return, going 3-0 in 2013 with solid submission wins over Team Alpha Male’s Daniel Romero and Anthony Avila. Uno will look to keep his momentum going against veteran Jesse Brock, who usually competes as a Bantamweight.

Ryan Ford’s unsavory past has always prevented him from making it big in the UFC or Bellator, but WSOF has afforded him an opportunity to shine in the main event opposite 33-year old veteran Joel Powell. Ford trains out of Tristar Gym and by all accounts has turned his life around. He’s currently riding a 5-fight win streak, highlighted by Bellator victories over Luis “Sapo” Santos and Kyle Baker. Bellator and Ford parted ways in 2013, possibly due to Ford being unable to compete in the USA.

Yamaguchi was hinting towards retirement in 2012, but he has since fought 3 times, going 0-2-1 overall. The glory days of Yamaguchi’s Shooto championship reign are all but over, but he will look to make one last run towards a title as he competes in Vale Tudo Japan’s 8-man tournament. His 1st round draw is fairly stiff as he faces off against Sklavos, whose only career losses are to elite talents T.J. Dillashaw, Josh Sampo, and Alexis Vila. Sklavos submitted Bellator veteran Nick Mamalis in his last fight.

Yuta Sasaki is considered to be the top Japanese prospect outside of the UFC now that Kyoji Horiguchi and Michinori Tanaka have recently signed. Sasaki is a stifling grappler that recently qualified for the 2013 Abu Dhabi World Championships. Tanaka will have one of his toughest fights to date as he faces fellow prospect Ishihara, whose only career loss was to Tanaka.

Bubba Bush was featured in my 2013 MMA Prospects Report, and is currently ranked as my #11 Middleweight prospect. Bush only fought once in 2013, though he was able to capture the Legacy FC Middleweight title in that lone bout. He was originally set to face fellow prospect Roger Narvaez, but will now face former Heavyweight Rakim Cleveland.

Tim Hague is a familiar name to UFC fans, though he went just 1-4 in the world’s leading promotion. Hague briefly retired in 2012 following back-to-back losses to Mike Hackert, but has since returned going 1-1 overall. He’ll be facing fellow Canadian Lee Mein, who is the father of UFC Welterweight Jordan Mein. WSOF has put together a fairly decent crop of Heavyweights, and the winner of this fight will likely earn themselves a shot at one of their recent signings.

Every top promotion is in search of Light Heavyweight talent, and this bout certainly delivers as two of Europe’s top 205’ers face off. Puetz, standing 6’6 and hailing from Germany, fights out of the same camp as recent Bellator signee Daniel Weichel. He has thus far faced lackluster competition, so this bout should be a perfect gauge as to whether Puetz is deserving of a look from the UFC or Bellator. Christensen fights out of Denmark and his only 3 losses have come to current Top 25 Light Heavyweight competition.

Stav Economou has proven to be a tough, durable Heavyweight throughout his 19-fight career. His only losses are to former UFC or Bellator veterans, and he nearly knocked off M-1 Heavyweight champion Damian Grabowski in 2013. Although Economou is the better known fighter, his opponent, James Mulheron, has quickly moved up the European Heavyweight ranks thanks to wins over English veterans Martin Thompson and Darren Towler. Mulheron has a combined 8-0 record as a pro and amateur.

Ryan Scope is currently ranked as one of my Top 25 prospects in the Welterweight division. He was originally supposed to face fellow Top 25 prospect Walter Gahadza, but Gahadza was forced to pull out due to injury. Luckily, journeyman Phil Flynn (7-10) has stepped up to keep Scope on the card. Scope has fought just once in the last 2 years, picking up a 1st round submission win over TUF Smashes alumni Luke Newman.

Two rising Featherweight prospects square off in what could eventually lead to a shot at Legacy FC Featherweight champion Leonard Garcia. Hunter Tucker fights out of Greg Jackson’s camp. He gained some hype early on his career, but suffered an upset submission loss to Kevin Aguilar in 2013. Jackson has mostly flown under the radar, but is finally getting a chance to prove himself against a fellow top prospect. Jackson has primarily fought at Lightweight, but made the cut down to 145 lbs. in his last fight.

Rodolfo Marques Diniz is one of the cautionary tales for up and coming prospects. He was once thought to be a Top 10 Bantamweight prospect prior to signing with Japan’s Dream promotion in 2011. Marques eventually lost his semifinals tournament bout to Bibiano Fernandes via decision. Dream soon went under and Marques soon struggled to find fights. He ended up returning back to Brazil’s Shooto promotion where he fought Pedro Nobre to a controversial win after it was later found that his teammate was serving as a judge. Within days, Marques’ head coach and Shooto promoter, Andre Pederneiras, overturned the result to a draw after hearing an onslaught of complaints. A couple of top Brazilians camps have now sworn off allowing their fighters to compete in Shooto Brazil. Marques has since moved to Australia where he’s helped start a Nova Uniao affiliate. Marques could still make a run towards a big league contract, but he will likely need to drop down to 135 lbs.

Tim Ruberg has been training in Brazil ever since losing his bid to earn a shot in The Ultimate Fighter 16 house. Ruberg finally returns to the cage against Chute Boxe’s Dyego Roberto. Ruberg has an impressive 14-1 overall record as a pro and amateur. With a couple of wins, he may find some interest from Bellator or mid-level promotions (Titan, Legacy).