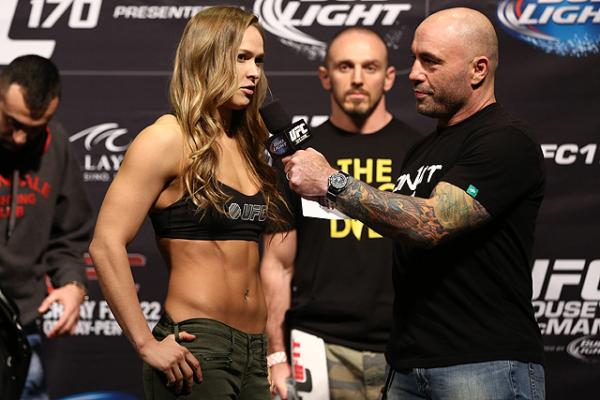 All week we heard Dana White hype up Rousey’s striking and sure enough she delivered. There was always a small contingent of fans that thought McMann had the skills to beat Rousey, yet this is not the same Ronda Rousey from her Strikeforce days. Rousey seems to be getting better with every fight, and outside of Cat Zingano, I really don’t see anyone giving her a run for her money in the UFC. Cris Cyborg and Holly Holm are certainly intriguing possibilities, but they both come with their share of challenges as to why they aren’t currently signed with the UFC. Cyborg claims she’s dropping down to 135 lbs. along with the fact that she dropped Tito Ortiz as her manager. Yet, in the same breath she continues to fire back at Dana White and Ronda Rousey in a way that continues to ostracize herself from competing in the UFC.

Daniel Cormier did exactly what he was supposed to do, which was to make weight and finish Cummins in the very 1st round. The UFC Light Heavyweight division was in need of new blood, and Cormier has now officially entered the mix of title contenders for Jon Jones. There’s still a pecking order ahead of him, but I think many fans are in agreement that Cormier has the goods to possibly dethrone champion Jon Jones. As for Cummins, compliments to him for stepping up and selling the fight on 9 days notice. His next fight will definitely be against a lesser opponent, and will be an immediate proving grounds as to whether Cummins has the necessary skills to compete in the UFC.

Dana White claimed he thought this would be the most boring fight of the night, and I was in somewhat agreement with him after looking up and down the main card. Yet, both men stepped up and delivered a Fight of the Night performance. Maia had MacDonald in all sorts of trouble in the 1st round, but MacDonald was able to stay calm and eventually turn the tide with superior striking and conditioning. MacDonald still has his sights set on a rematch with Carlos Condit, but with Condit likely in line to face the winner of Hendricks/Lawler, MacDonald could be looking at facing the winner of Shields/Lombard.

Mike Pyle needed to win this fight desperately as he was entering UFC 170 on the final fight of his UFC contract. Luckily, Pyle was able to secure the victory and will likely be in line to finish his career with the UFC. It was an entertaining scrap that saw both men dig deep. I feel for Waldburger, who is truly one of the most talented grapplers in the UFC. He’s still just 25 years old, but he has accumulated so much damage in his fight career that I’m genuinely worried for his health. The UFC isn’t the NFL when it comes to concussion protocol, but I hope they don’t rush Waldburger back into competition against another dangerous striker.

Stephen Thompson has certainly earned back some of the hype that was taken from him by Matt Brown. Thompson and Whittaker are easily two of the brightest striking prospects in the division. Whittaker was finding some success early, but Thompson remained composed and used his speed, footwork, and angles to eventually punch his way to victory. Whittaker has faced some stiff competition after winning TUF Smashes. Hopefully, UFC matchmaker Joe Silva will build him back up because he still holds a ton of promise.

Alexis Davis versus Jessica Eye had title implications written all over it. After 3 hard-fought rounds, Davis edged out a decision and now looks to be in the driver’s seat for a main event spot opposite Ronda Rousey. There’s still a chance Cat Zingano may be ready to cash in her title shot, but Dana White seemed unsure of Zingano’s health status.

The fight booking of title contender Raphael Assuncao and top prospect Pedro Munhoz was a head scratcher to say the least. The win did nothing to boost Assuncao’s current contender status. More troubling was the fact that UFC matchmaker Sean Shelby threw Munhoz to the wolves. Munhoz was expected to sign with the UFC in 2014 and the hope was that he could make an immediate impact and position himself as a future contender for 2015. This fight did nothing to create any sort of hype towards Munhoz’s career. It was a wasted opportunity, and a horrible case of matchmaking in the grand scheme of things.

Aljamain Sterling didn’t look as impressive as some had hyped. I am still a fan of Sterling and his long-term potential, but he will need to tighten up his striking. Gibson proved to be a game opponent, but fighting on short notice is never an ideal way to debut.

Zach Makovsky has now solidified his standing as a Top 10 Flyweight in the world. Josh Sampo is as tough as they come, yet Makovsky stepped up to the plate and showed some true grit in the 3rd round to escape with a decision victory. Makovsky is capable of beating the guys ranked ahead of him (Moraga, Lineker, McCall), and he will likely face one of those aforementioned names in the months to come.

Erik Koch looked reborn at UFC 170. He’d been struggling with the weight cut to 145 lbs. for his last few fights, and it showed, dropping back-to-back bouts to Ricardo Lamas and Dustin Poirier. Koch now has the opportunity to put on some muscle and let his skills speak for themselves. He may not be be ready for the Top 25 just yet, but he could hopefully develop into a Donald Cerrone-type fighter down the road. As for his opponent, Rafaello Oliveira, he’s likely to be released by the UFC. He’s just 2-6 in the UFC, and has never been able to get over the proverbial hump against top-level competition.

The UFC has been signing their fair share of top level prospects over the last few months, but it seems as if they swung and missed with Yosdenis Cedeno and Ernest Chavez. Cedeno proved to be a flashy striker with a limited ground game and lackluster conditioning. Chavez didn’t look much better himself, though he did show a better overall game. Chavez seems to be carrying around some extra weight and will hopefully consider dropping down to 155 lbs. I don’t expect either fighter to stay around the UFC that long after watching them fight Saturday. There are only so many roster spots available in the UFC, and it’s always a shame when the UFC signs fighters that seem ill-equipped to compete at the highest levels.

There was a solid lineup of fights that went down outside the UFC this weekend. Taking center stage were World Series of Fighting, Legacy FC, and Vale Tudo Japan.

At World Series of Fighting: Canada, Welterweight prospect Ryan Ford scored the finish of the night as he knocked out veteran Joel Powell in the main event. In the co-main event, #1 Heavyweight prospect Steve Mocco was upset by fellow prospect Smealinho Rama. The fight went to a decision with neither man looking stellar. Mocco’s career prospects took a huge hit, and it wouldn’t be surprising to see him hang up the gloves if he loses his next fight. Other notables on the card were TUF 16’s Michael Hill, who won via decision over Ryan Dickson. Featherweight prospect Josh Machan won a close decision, and is now 12-1 over his last 13 fights. Lastly, former UFC Heavyweight Tim Hague defeated Lee Mein via 1st round TKO.

Photo Credit: www.sherdog.com/Dave Mandel
Get more pictures like this from SHERDOG.COM