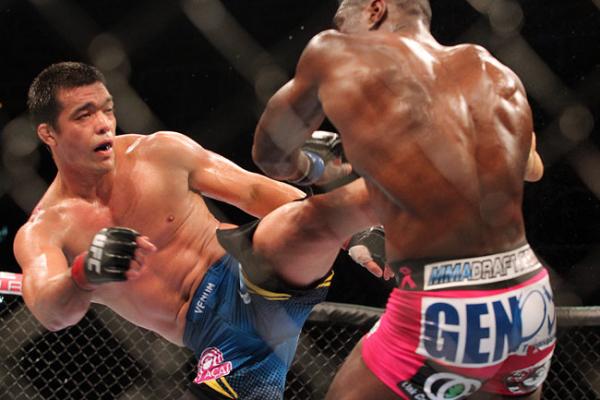 I know some people aren’t fans of tactical fights, but I though Machida and Mousasi both put on a great fight. We are talking about two very evenly skilled Top 10 Middleweights that for 5 rounds played chess with their punches and kicks. Mousasi was coming off a long injury layoff and dropping down a weight class. Throw in the fact that he’d be fighting 5 rounds against Machida in Brazil, and the odds seemed stacked against him. Yet, Mousasi never backed down and was in the fight until the very end. I strongly believe that one day Mousasi will be fighting for the UFC Middleweight championship. Machida is likely on his way to fighting the winner of Weidman-Belfort. He certainly has the right package of skills and experience to unseat either foe.

Ronaldo Souza didn’t look as impressive as his 1st round destruction of Yushin Okami, but he certainly proved that he is one of the top Middleweight in the world. Carmont put on a gutsy effort, but was simply outmatched in nearly every area. He had a few opportunities to let his hands go, but he couldn’t pull the trigger.

Erick Silva was virtually a lock to win Saturday night, and he did just, easily finishing newcomer Takenori Sato. The verdict is still out on Silva’s long-term potential, but he certainly has the talent to be fighting Top 15 competition from here on out.

Nicholas Musoke opened up some eyes by defeating Viscardi Andrade. Musoke definitely benefited from the move to 170 lbs. His wrestling was better than I thought, and he more than held his own on the ground with Andrade.

Charles Oliveira is still a future star in my opinion. He’s still just 24 years old and has a ton of big fight experience under his belt. His striking still has a ways to go, but it’s hard to name many fighters that aim for the submission finish more than him. He’s only lost to the elite of the UFC Featherweight and Lightweight division. The time may be coming where he turns the corner and becomes a contender. I still don’t think he’s quite there yet, but if he can continue to work on his footwork and head movement, he has all the talent in the world to become a true player at 145 lbs.

Joe Proctor didn’t put up the type of performance I was expecting. Granted, he was coming off a long injury layoff, but he had the skills to easily finish Cristiano Marcello on the feet. Unfortunately, he left him off the hook and went on to win a forgettable decision. Marcello has likely fought under the UFC banner for the final time. He’s already developed a good camp, CM System, in Brazil and we will likely see him cornering his fighters in the octagon for years to come.

Rodrigo Damm and Ivan Jorge were pretty evenly matched and it showed throughout their bout as neither fighter could pull ahead. Most of the contest took place on the feet, where Jorge looked much improved from his recent fights. It’s a shame Damm can no longer compete at 145 lbs. because he’s going to have a difficult time using his wrestling skills. My hope is that Ivan Jorge gets one more shot in the UFC. He looked much better at Lightweight and has a stellar ground game.

The book was out on how to beat Francisco Trinaldo. He is a beast in the 1st round, but fades badly down the stretch. That all started to play out once again as Trinaldo took advantage early, only to struggle in the 2nd round. The fight seemed up for grabs in the final round, and to much surprise Trinaldo was the one who grinded out the victory. Trinaldo is loved by the Brazilian fans, and it is hard not to root for a guy that brings the action every time. Ronson is now 0-2 in the UFC, but hopefully he gets one more shot against a non-Brazilian.

Iuri Alcantara and Wilson Reis put on the best fight of the undercard. Alcantara was the favorite coming in, but once again his wrestling failed him as Reis was nearly able to pull off the upset. Reis has had his troubles in the past against explosive strikers, but he was able to weather the storm and stay in the fight until the very end. I once though that Iuri Alcantara had the skills to contend against Renan Barao, but based off what I’ve seen of him in the last 3 fights, that sentiment is nearly completely gone. Iuri has to improve his wrestling if he’s ever going to contend for a title.

Felipe Arantes raised his record to 3-2-1 in the UFC, having fought every fight in Brazil. He’s hopefully ready to face a better known talent next time out. As for Maximo Blanco, I wouldn’t be surprised to see him released. He’s had his fair share of rules transgressions in the cage, and some of his killer instinct has faded ever since leaving Sengoku.

Ildemar Alcantara probably pulled off the upset of the night beating newcomer Albert Tumenov. Alcantara has looked very beatable in his last 2 fights, and Tumenov was considered to be one of Russia’s rising talents. Tumenov is still just 22 years old and the future is still bright for him. He’s going to have to really work on his wrestling though because Alcantara exposed him, and Ildemar’s wrestling is hardly considered top notch.

Zubaira Tukhugov vs. Douglas Andrade opened up the UFC Fight Night 36 fight card and sort of set the pace for the fights that followed. Andrade looked very stiff robotic, and never seemed to get comfortable. Tukhugov fought a smart fight, though he’s been known to be somewhat flashy previously. My hope is that Andrade drops down a weight class next time out.

There wasn’t a whole lot of notable action outside of the UFC this weekend. Cage Warriors 64 headlined the regional shows, which still produced its share of notable fights and names.

Former UFC and Bellator veteran Maiquel Falcao fought for the first time since his well-documented brawl in Brazil. He won via 2nd round submission.

Former UFC and Bellator veteran Maiquel Falcao fought for the first time since his well-documented brawl in Brazil. He won via 2nd round submission.

Lightweight prospect Juha-Pekka Vainikainen got back on the winning track, knocking out his opponent in the 2nd round at Cage 25.

Miguel Torres won for the first time since 2011, winning via decision in his home state of Indiana.

Former Shooto world champion Alexandre Franca Nogueira (no relation to the Nogueira brothers), picked up a win in Mexico.

Photo Credit: www.sherdog.com/Dave Mandel
Get more pictures like this from SHERDOG.COM