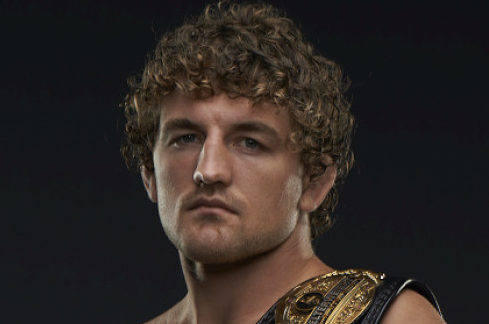 Askren was an assistant wrestling coach at Arizona State University and was an American amateur wrestler for the University of Missouri. He is a two-time state champion in wrestling at Arrowhead High School in Hartland, Wisconsin.[4]

In college, he wrestled in the 174 lb. weight class. He lost the National Collegiate Athletic Association (NCAA) championship match to Chris Pendleton in both 2004 and 2005 before winning it in 2006 and 2007. He is known for his pinning ability (he holds the single-season NCAA pin record); his massive afro; and his “funky”, or unorthodox, wrestling style. For example, while being ridden in the 2005 championship match, he attempted to reach around and apply a headlock to Pendleton, a move that any wrestling coach would disavow. His tall, lanky body — in sharp contrast to the squat, muscular physiques of many top wrestlers — allows him to attempt moves that most wrestlers could not. This characteristic later led to a challenging transition to freestyle wrestling early in his career, as the freestyle rules differ from folkstyle wrestling and penalize a wrestler for exposing his back. His younger brother Max also wrestled for Missouri and won a national championship in 2010.[5]

Askren had a dominant Junior season in 2005–06, winning all 45 of his matches and pinning in 25 of them.[6] He won the 174 pound weight class easily at both the Big 12 and NCAA Championships. He won his Big 12 finals match 17–6 over Jacob Klein of Nebraska and his NCAA finals match 14–2 over future two time NCAA champion, Dan Hodge Trophywinner, and World silver medalist Jake Herbert of Northwestern. Herbert was also undefeated going into the NCAA finals. Askren’s season earned him the Outstanding Wrestler award at the NCAA Championships as well as the Dan Hodge Trophy and the Rev Wrestler of the Year. [7]

Askren continued that dominance going into his Senior year in 2006–07, going undefeated again with a record of 42–0. [8] He won his second consecutive NCAA Championship at 174 pounds by defeating another future NCAA champion, second-ranked Keith Gavin of Pittsburgh, 8–2. Askren finished his collegiate career with an 87 match winning streak. He also became only the second person to win the Dan Hodge Trophy twice, as W.I.N. Magazine named the 2007 winner. Askren was again named the Rev Wrestler of the Year. He also received the Schalles Award, named after Wade Schalles and given to the most prolific pinner at the end of each season.[9]

Askren finished his collegiate wrestling career with a record of 153–8, with 91 of those victories coming by way of fall.[citation needed] Those 91 pins put him at third on the all-time NCAA Division I pins list. In his four-year career at Missouri, Askren only lost to two opponents, Chris Pendleton of Oklahoma St. and Ryan Lange of Purdue. He was also a four-time All-American, including being only the twelfth Division I wrestler ever to be a four-time finalist. Askren was also nominated for an ESPY in 2007 in the category Best Male College Athlete. On January 9, 2012 it was announced that Askren would be one of six new inductees to the University of MissouriIntercollegiate Athletics Hall of Fame.[10]

In the summer of 2008, Askren defeated national runner-up Tyrone Lewis in two consecutive matches by decision at the US Olympic Trials in Las Vegas, becoming the second University of Missouri wrestler to qualify for the Olympics. Sammie Henson, who also attended Missouri but finished his college wrestling career at Clemson, competed in the 2000 Olympics winning a silver medal. Askren competed in the 74 kg. weight class at the 2008 Summer Olympics. Askren won his first match via pin against Hungarian István Veréb. In his round of 8 match he lost to Cuba’s Ivan Fundora 1–3 0–4. The Cuban’s loss to Russia’s Buvaisar Saitiev in the quarterfinal round ended Askren’s hopes of a medal at the 2008 Games.

Askren was asked if inexperience was a factor. Though he was a two-time NCAA champion at the University of Missouri he was relatively new to freestyle after wrestling folkstyle in college. “That wasn’t it,” he said with tears in his eyes, “I just wasn’t good enough. I sucked.” [11]

Although Askren decided to pursue a career in MMA after the Olympics, he continued to compete in wrestling occasionally. In 2010, he avenged his Olympic loss by defeating Fundora in the semifinals of the Cerro Pelado International, in Cuba. This came shortly after Askren won the Dave Schultz Memorial International. Later in the same year, Askren defeated 2009 world silver medalist Jake Herbert in a folkstyle rules match at the Midlands Tournament. Askren also competed in the Agon Wrestling Championships and the Flo Premier League.

Askren made his professional MMA debut on February 7, 2009.[12] It was held by Headhunter Productions at the Holiday Inn Select Executive Center in Columbia, Missouri. He defeated Josh Flowers via TKO early in the first round.[13]

Askren had his second fight at Patriot Act 2 in Columbia, Missouri. He defeated Mitchell Harris via submission by arm triangle. The fight was at a catchweight of 175 pounds.[14]

Askren competed at the 2009 ADCC Submission Wrestling World Championship from September 26—27, in Barcelona, Spain. He won his first match against Toni Linden by arm triangle choke. He lost his second match to Pablo Popovitch, a veteran grappler he had trained with the previous summer, by figure four footlock early in the match. Popovitch went on to win the championship in the under 77 kg (169 lb) division.[15]

Askren was a participant in Bellator Fighting Championships Season 2 Welterweight Tournament.[17] In his first fight, Askren defeated Ryan Thomas via technical submission at Bellator 14 on April 15, 2010. The outcome of the fight was controversial because Thomas protested the stoppage as soon as Askren released the choke.[18]

After Jim Wallhead was pulled from the tournament, Thomas was given another chance to compete. Thomas defeated Jacob McClintock by TKO in the first round at Bellator 15 and was awarded a rematch with Askren. When the two fought at Bellator 19, Askren came out victorious again with a unanimous 30–27 decision after controlling Thomas with wrestling for three rounds.[19]

On October 21, 2010 in Philadelphia Askren took on the Bellator Welterweight Champion Lyman Good. Despite being hit with a brutal upkick and almost getting caught in a triangle choke with one minute left, he was able to take down and control Good in every round. Askren won via unanimous decision (49–46, 48–47, and 50–45) to win the Bellator Welterweight Championship.[21]

Askren next returned at Bellator 40 to fight and defeat Nick Thompson after taking down and controlling Thompson for all three rounds. Although Askren started off quickly in the third round with a spinning back fist and several other strikes, he was caught with an overhand right by Thompson, causing Askren to take down and control Thompson for the remainder of the round. Askren went on to win by unanimous decision (30–26, 30–27, and 30–27).[22]

Following his unanimous decision win over Thompson in a non-title affair at Bellator 40 in Newkirk, Oklahoma, Askren revealed that he will relocate to Milwaukee in the near future to train under Duke Roufus at Roufusport.[23]

Askren successfully defended his title against season 5 welterweight tournament winner Douglas Lima at Bellator 64 on April 6, 2012 on Good Friday at the Caesars in Windsor, Canada.[25]

Next for Askren was a title defense against Karl Amoussou,[26] the fight taking place at Bellator 86 on January 24, 2013. Askren once again used his top control wrestling to shut down his opponents grappling, and opened a cut on Amoussou’s forehead with an elbow strike. The doctor stepped in between the third and fourth rounds, judging the cut too severe for Amoussou to continue.[27]

In the final fight of his contract, Askren faced tournament winner Andrey Koreshkov at Bellator 97.[28] He dominated the fight with his wrestling and ground strikes, outstriking his opponent by a wide 248 to 3 margin before winning via TKO in the fourth round.[29]

On November 14, 2013, following a negotiation period, Bellator announced they had released Askren from the company, and that he was now an unrestricted free agent.[30]

Askren met Bakhtiyar Abbasov, who had been riding a nine-fight win streak, in the main event of ONE FC: Honor and Glory on May 30.[32] He won the fight via submission in the first round (arm triangle), and proceeded to call out ONE champion Nobutatsu Suzuki, stating “Suzuki is going to bring me my belt. He can put it in the middle of the cage and give it to me, or I can take it the hard way!”[33]

Askren faced Suzuki at ONE Fighting Championship: Reign of Champions on August 29, 2014. He won the fight via TKO due to strikes in the first round to become the new ONE Welterweight Champion.

Askren faced Luis Santos in the main event at ONE Championship: Valor of Champions on April 24.[34] The fight was ruled “no contest” after an accidental eye poke from Askren at 2:19 of round 1 rendered Santos unable to continue.[35]

In the next fight Askren beat Russia’s Nikolay Aleksakhin at the ONE Championship: Global Warriors on April 15, 2016 by unanimous decision.

Askren then fought Agilan Thani at the ONE Championship: Dynasty of Heroes on May 26, 2017. He won the fight via submission due to an arm-triangle choke in the first round.

Askren then faced Zebaztian Kadestam at the ONE Championship: Shanghai on September 7, 2017. He won the fight via TKO due to punches.

In his last fight, Askren faced fellow veteran Shinya Aoki at ONE Championship: Immortal Pursuit on November 24, 2017. Prior to the fight, he claimed this would be his last fight. He won the fight via TKO due to punches in the first round. He retired from MMA after the win.

Askren left the door open for one last fight if he was made an offer to “prove I’m the best welterweight in the world”. He discussed the possibility of facing Georges St. Pierre, claiming “He doesn’t want a title fight. He just wants to build on his legacy,” adding that he felt he would be the perfect opponent for St. Pierre. Askren later claimed he would fight St. Pierre in spring of 2019.[citation needed]

On November 3, 2018, it was announced that the UFC has signed Askren under the “trade UFC and One Championship agreement”, in exchange for former UFC Flyweight Champion Demetrious Johnson.[36]

Askren made his UFC debut against the former UFC Welterweight Champion Robbie Lawler on March 2, 2019 at UFC 235.[37] The bout was initially scheduled for UFC 233, but after the event was cancelled the fight was rescheduled for UFC 235. Askren won the fight via bulldog choke in the first round, through a questionable stoppage by referee Herb Dean. With Lawler appearing unconscious, referee Herb Dean stopped the fight. Immediately after the stoppage Lawler stood up, protesting the stoppage.[38] Replays appear to show Lawler’s arm going limp and giving a thumbs up right after, which some credit to Lawler slipping in and out of consciousness. Although controversial, Nevada Athletic Commission executive director Bob Bennett explained that the commission had “no problem” with Dean’s decision to stop the fight.[39]