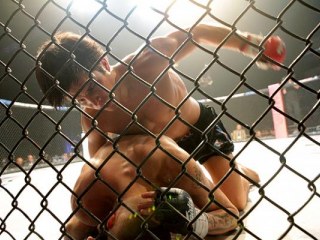 Leandro Higo has been ranked as a Top 25 Bantamweight Prospect for the last couple of years here on RankingMMA. I continued to see other MMA media outlets rank him as a Flyweight, and after doing some digging around (thanks Tapology.com), I was able to find out that he has competed at 125 lbs., and was still capable of making that weight despite having competed at 135 lbs. for the last few fights. Higo is considered by some to be the top Flyweight prospect in the world, but those skills did not immediately jump out at me when I started watching more of his fights. I understand that he’s had an extremely difficult time finding fights in Brazil, but you have to wonder about his true potential considering he’s lost to Iliarde Santos and Marcos Vinicius, both of whom just washed out of the UFC. Yes, Higo is still just 25 years old and has been training with Team Nogueira, but I am struggling a bit with seeing him reach the upper levels of the division, especially after watching his fight against Iliarde Santos. That fight was at 135 lbs., though both now compete at 125 lbs. Higo just seemed a bit hesitant and lacked some of the explosion and athleticism I was hoping to see. Nonetheless, Higo is a steady, well-rounded fighter. Seeing him in his natural weight class may help showcase his skills and there is no denying he deserves a shot in the UFC to prove himself.