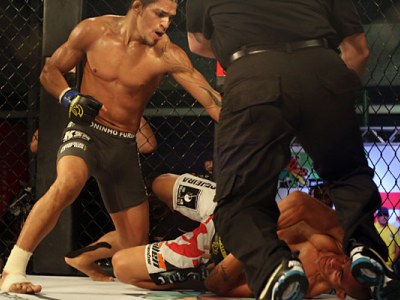 Rick Glenn was featured in last year’s report, coming in at the #4 spot. So, why did he drop to #10 this year? Primarily, it is because of the recent infusion of Russian talent, but it also can be attributed to Glenn’s inactivity in 2013-2014. He hasn’t fought in over 6 months, and in a strange development, dropped out of a WSOF scheduled title shot against Georgi Karakhanyan. There were rumors that Glenn dropped out of the fight due to a possible UFC contract offering, though a family emergency was eventually cited. Karakhanyan ended up winning the WSOF title against Glenn’s replacement, Lance Palmer, and he will now once again face off against Glenn as the headliner for WSOF 10. This is a huge opportunity for Glenn to make his presence known as an elite Featherweight. He has had his issues against better wrestlers and grapplers, but he has always had a knack for turning the tide and letter his striking and conditioning reign superior. Glenn trains out of Roufusport, and is very comparable to Erik Koch. He’s not as explosive, but he’s long and lanky and can knock you out in a variety of ways. Glenn’s submission defense has held up against some notable BJJ guys as well, and with Ben Askren as a training partner, one would think his takedown defense has improved in recent months.