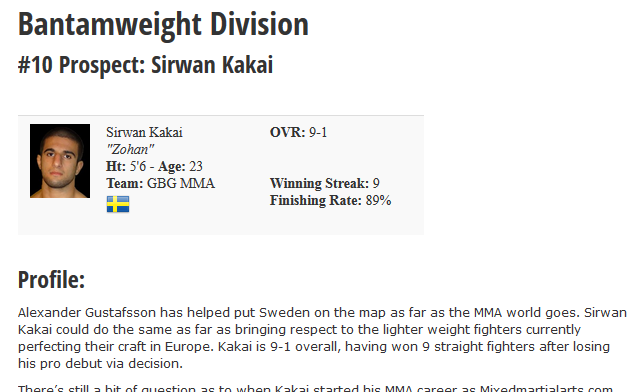 Alexander Gustafsson has helped put Sweden on the map as far as the MMA world goes. Sirwan Kakai could do the same as far as bringing respect to the lighter weight fighters currently perfecting their craft in Europe. Kakai is 9-1 overall, having won 9 straight fighters after losing his pro debut via decision.

There is still some question as to when Kakai started his MMA career as Mixedmartialarts.com has him down for an amateur fight back in 2006. Nonetheless, he entered the pro ranks in 2008 as an 18-year old Featherweight where he lost his debut to Michael Gronfors via decision. Following his debut loss, Kakai sat out for almost a year before returning with a vengeance. Kakai ran off 5 straight wins, 4 of which came via finish.

In 2011, Kakai flew stateside to try out for Season 14 of The Ultimate Fighter. Kakai was supposedly able to make it through the 1st round of tryouts, which meant his grappling was up to par. He ended up not getting making the final cast and returned back to Europe to build up his record on the advice of some UFC execs. Kakai stepped up his competition level, facing experienced Scottish fighter James Doolan in Sweden’s Superior Challenge promotion. Kakai won via 2nd round submission, cementing his status as one of the top Bantamweights in Europe.

Kakai struggled to find suitable fights shortly thereafter, and after a year away from the cage finally returned with a TKO win over Brazilian submission artist Claudemir Souza. Kakai has since earned 2 more finish victories to bring his overall record to 9-1 .

Kakai trains out of Sweden’s GBG MMA alongside fellow prospect Assan Njie and formerly Akira Corassan. Kakai has frequently traveled stateside to train with Brad Pickett and company at American Top Team as of late. Kakai’s growth as a well-rounded fighter has looked evident in recent fights, likely from the training he’s received at ATT.

Kakai is still just 23 years old, but he has already built a respectable record against decent journeymen fighters. Kakai does not have many challenges left on the European Bantamweight scene. He unsuccessfully tried out for TUF 14, but that could have been due to his age at the time (21) or his record, which was just 5-1 overall then.

The UFC seems primed to return to Sweden often thanks to Alexander Gustafsson’s success. The UFC just recently added Ilir Latifi and Tor Troeng to their roster in 2013, and it would seem as if Kakai would be their next logical choice for possible prospects to sign from that region.

Kakai is pretty thick, but at only 5’6 he may end up considering a move down to Flyweight in order to maximize his skill set. He has been the superior fighter in nearly all of his fights thus far whether standing or on the ground, but that is against significantly lesser competition. It could be a rude awakening for Kakai when he faces off against an elite wrestler at 135 lbs.

Regardless of future predictions about his success against elite-level competition, the fact remains that Kakai is ready for a shot in the UFC. He has been finishing all of his opponents and there was obviously some mutual interest 2 years ago when Kakai nearly made The Ultimate Fighter 14. I am guessing that the UFC’s next return trip to Sweden will lead to Kakai’s likely signing. 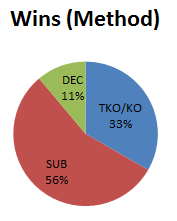 Video 2: Kakai Highlights Video (Watch out for the language!)