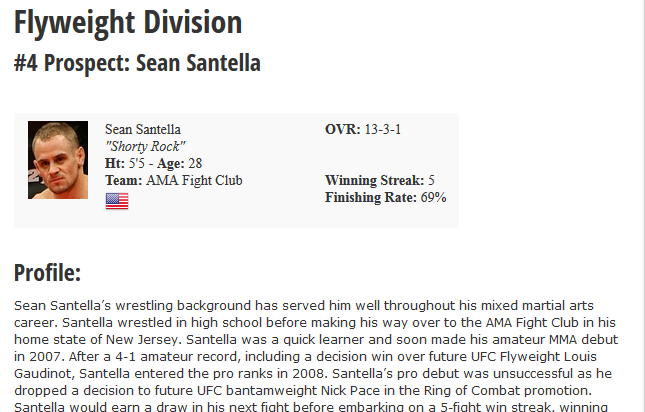 Sean Santella’s wrestling background has served him well throughout his mixed martial arts career. Santella wrestled in high school before making his way over to the AMA Fight Club in his home state of New Jersey. Santella was a quick learner and soon made his amateur MMA debut in 2007. After a 4-1 amateur record, including a decision win over future UFC Flyweight Louis Gaudinot, Santella entered the pro ranks in 2008. Santella’s pro debut was unsuccessful as he dropped a decision to future UFC bantamweight Nick Pace in the Ring of Combat promotion. Santella would earn a draw in his next fight before embarking on a 5-fight win streak, winning each fight via submission. Santella, who had been competing as a bantamweight, finally had his win streak snapped by Bellator veteran Josh Rave before ultimately making his way back to Ring of Combat where he won his next 2 fights.

Santella eventually signed a contract with Cage Fury Fighting Championships in 2011. Santella immediately squared off with top Bantamweight prospect Aljamain Sterling for their Bantamweight title, but he came up short, losing via decision. It would be the last time Santella tasted defeat as he dropped down to 125 lbs. and has since run off 5 straight wins. Santella also captured the CFFC’s Flyweight title, which he is set to defend against former Bellator Bantamweight champion Zach Makovsky.

Santella trains out of AMA Fight Club in New Jersey. AMA Fight Club is home to many of the East Coast’s top fighters, including the Miller Brothers (Jim and Dan) and Charlie Brenneman. Santella’s striking is still a work in progress, but his smothering takedown game, toughness, and slick submissions are both hallmarks of his training partners.

Santella’s lack of striking is still a concern, but he makes up for it with excellent wrestling and submission skills. All 3 of Santella’s career losses have come at bantamweight and he has looked much stronger at 125 lbs. Santella brings a similar style to Clay Guida, in that he tries to push the pace, limit his striking exchanges, and is constantly looking for the takedown. Santella should continue to find success on the regional scene, but he will have to sharpen his all-around skills in order to compete with the UFC’s elite. If Santella is unable to score takedowns, his chances of winning decrease considerably. AMA Fight Club has solid contacts with the UFC, and I would not be surprised to see Santella sign with the UFC in the very near future. 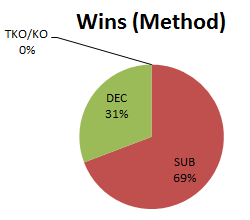