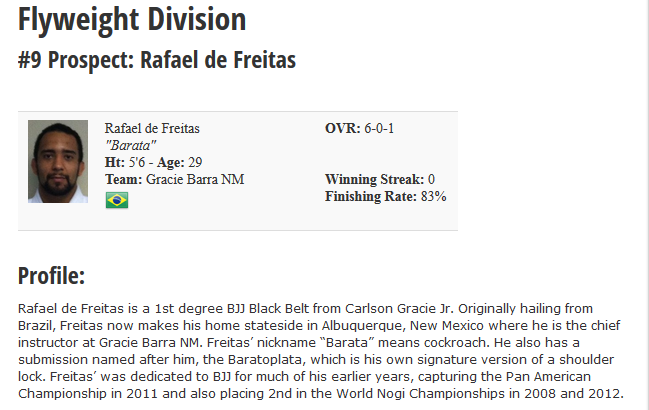 Rafael de Freitas is a 1st degree BJJ Black Belt from Carlson Gracie Jr. Originally hailing from Brazil, Freitas now makes his home stateside in Albuquerque, New Mexico where he is the chief instructor at Gracie Barra NM. Freitas’ nickname “Barata” means cockroach. He also has a submission named after him, the Baratoplata, which is his own signature version of a shoulder lock. Freitas’ was dedicated to BJJ for much of his earlier years, capturing the Pan American Championship in 2011 and also placing 2nd in the World Nogi Championships in 2008 and 2012.

Freitas made his mixed martial arts debut in 2007, winning via submission. Freitas only fought once in each of the next 4 years, winning each fight via 1st round submission. It was his  2010 win over Bellator veteran Nick Mamalis that caught the attention of some MMA pundits. Mamalis was 18-4 at the time, but Freitas never showed any signs of inexperience quickly tapping him out just minutes into the fight. Freitas fought twice in 2011, and started to show signs of the improvements he had made in his striking game.

In 2012, “Barata” signed with Legacy FC and was set to face fellow flyweight prospect Joshua Sampo, but he was forced out of the fight due to injury. Freitas was on the shelf for nearly 18 months before returning to the cage to fight UFC/WEC veteran Antonio Banuelos. Freitas surprisingly looked to keep the fight standing, and though he seemed to be controlling the distance well, he was unable to mount much damage. Banuelos scored a couple of takedowns and in the end the judges determined the fight a draw. Had Freitas won the fight decisively, the UFC likely would have had their eyes on him.

Freitas lived in Brazil until 2007 before relocating to New Mexico, USA. Freitas currently trains out of Gracie Barra NM, which does not have any marquee names fighting out of there. Though New Mexico has some of the best MMA gyms in the country, it remains to be seen if Freitas will venture outside of Gracie Barra’s walls.

Freitas is a top prospect, but his recent development and desire for striking has me a bit concerned. Freitas is quick and can eventually use his length to control the distance in his fights, but he is not going to beat top-level fighters with his striking. Freitas needs to go back to what got him here in the first place, which is his grappling. Freitas still has an undefeated record, but he’s had some close calls in his last 2 out of 3 fights. Legacy FC is a great promotion for developing talent, and it is likely that they are going to give Freitas some solid challengers in his next few fights. If Freitas can win his next 2-3 fights via finish, I expect the UFC to come calling. 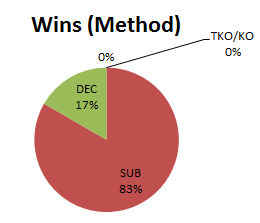