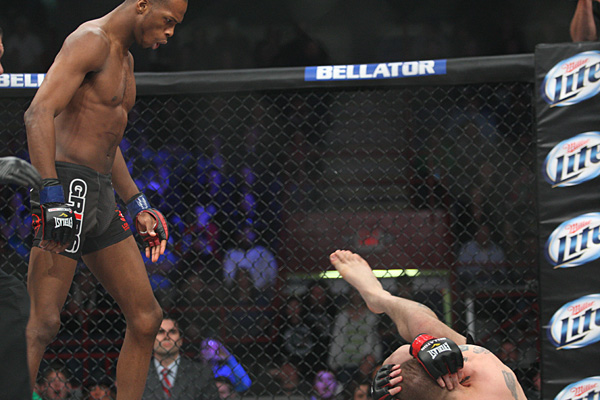 Prospect of the Week: Michael Page

Michael Page has gained quite an underground reputation as one of the most exciting strikers in all of MMA. Page grew up  the son of a Kung Fu Master, and immediately began competing alongside his brothers in various striking tournaments. Page eventually went on to win a Silver medal in kickboxing at the 2010 World Combat Games.

Page has now brought his immense talent and raw physical skills to mixed martial arts. He has been training out of London Shootfighters, which is one of the top camps in England, and home to UFC fighters John Hathaway and Claudio Henrique Silva. Page is easily one of the tallest, longest fighters at 170 lbs., standing 6’3 with a 77″ reach. Page’s striking style is unique to say the least. The only fighter I can say he resembles is the great Anderson Silva. Page has a ways to go before ever even being placed in the same sentence as Anderson, but for the purpose of comparison’s sake, Page and Silva are the only fighters I have seen dance around the cage with their hands down, and in a blink of an eye, knock their opponents out with lightning-fast, accurate strikes.

Page is not like most of the prospects I have featured on my site. He hasn’t faced stellar competition, and there is not a ton of footage showing Page in different circumstances. So, for all I know, his clinch game, conditioning, and submission defense could all be substandard. From what I have seen, Page’s takedown defense seems vulnerable, though he does show excellent movement while on the feet and has flashed some submission ability. What stands out on tape though, is his length and accuracy of his strikes. His nickname, “Viper,” is extremely accurate for describing his striking style.

It seems as if Page has some type of deal with Bellator, though he has been able to fight in England’s UCMMA and India’s SFL promotion. Page has pulled out of a couple fights in Bellator, and there is no telling if Page would be willing to enter one of Bellator’s tournaments.

I’m still not entirely sold on Page’s potential. The first time he faces a wrestler with any type of credentials could spell the end of the Michael Page hype. Yet, for now, Page demands his fair share of attention. He has joined a solid camp where he can refine his skills and develop the tools needed to compete at the sport’s upper levels. Fighters with his physical skills and striking background don’t come around very often.