At 36 years old, Mamoru Yamaguchi will probably be the oldest fighter featured in The MMA Prospect Report. It is a shame to omit a fighter who for years was considered the top fighter in the flyweight division just because he is nearing retirement rather than his prime. Yamaguchi made his mixed martial arts debut in the dark ages of the sport (pre-2000). Yamaguchi quickly solidified himself as one of the top lighter weight fighters in the world when he captured the Shooto Featherweight Championship (132 lbs.) in 2000. Yamaguchi built a 7-0-1 record before falling to Masahiro Oishi via submission. This would be the first, but not the last time Yamaguchi’s submission defense would come into question.

Yamaguchi would eventually drop down another weight class, where he won the inaugural Shooto Bantamweight Championship (123 lbs.) over future UFC veteran Yasuhiro Urushitani. Yamaguchi would hold onto the title for nearly 3 years before ultimately losing it to Japanese rival Shinichi “B.J.” Kojima. Yamaguchi went 3-1 in his next 4 fights, losing a rematch with Urushitani before receiving an opportunity to reclaim his Shooto Championship from Kojima. Unfortunately, Yamaguchi was once again defeated by Kojima in a fight that was his for the taking until a last minute submission.

After two more wins in Japan, Yamaguchi brought his famed afro and talents stateside in 2010. The UFC still had no plans for a flyweight division, so Yamaguchi competed in the King of the Cage promotion and Tachi Palace Fights, which were both home to some of the top flyweights at the time. Yamaguchi quickly made his presence felt, submitting prospect Frank Baca and one fight later winning the KOTC flyweight title. Yamaguchi would never defend the title though, as he returned to Shooto where he knocked out Fumihiro Kitahara before returning stateside for a huge opportunity to gain some recognition as Yamaguchi was set to face future UFC title contender John Dodson in 2011. Unfortunately, the opportunity fizzled as Dodson pulled out of the fight in order to compete on The Ultimate Fighter 14, which he ended up winning. Yamaguchi ended up fighting a lesser known opponent, whom he knocked out in the 2nd round. Yamaguchi started to hint at retirement, just as the UFC was about to debut their flyweight division.

Yamaguchi staved off retirement, but ended up losing a decision to fellow world-ranked flyweight and future UFC veteran Jussier Formiga. Yamaguchi once again was rumored to be retiring, but fought once more against rising star Darrell Montague in Japan. It was a close fight throughout, showing Yamaguchi’s ability to still be competitive against his younger competition, but ultimately lost a split decision. Yamaguchi has not fought since December of 2012 and retirement once again could be a reality if the UFC does not sign him soon.

Yamaguchi trains out of Shooting Gym Yokohama, which is home to a host of Japan’s top fighters that includes; Takeshi Inoue, Junji Ito, and Akiyo Nishiura. Yamaguchi performed well when traveling to the United States, something that many of his countrymen have failed to do. Unfortunately, his camp does not seem to have any ties to the UFC, so Yamaguchi’s only hope of gaining the UFC’s attention is through winning some high-profile fights or possibly be cast on the rumored debut of TUF: Japan.

Most fans that followed the Flyweight Division were hoping that Mamoru Yamaguchi would be one of the first additions to the UFC’s roster, but Yamaguchi’s age and recent loss to Jussier Formiga may have counted against him. It is still surprising though how Yamaguchi has been overlooked by UFC matchmaker Sean Shelby. Yamaguchi could have brought in some much-needed charisma to the division, and he is still a serious threat on his feet with his lethal Muay Thai skills. Yamaguchi would likely struggle against many of the wrestling-based fighters in the UFC flyweight division, but there are some fun matchups that could immediately be made should he sign. The probability of that happening seems to lessen with each month that passes though. Yamaguchi is coming off 2 straight losses, although they are to Top 10 opponents. Hopefully, the UFC will step up to the plate and give what was once the top flyweight in the world his proper due by signing him to the UFC in 2013. 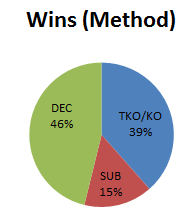