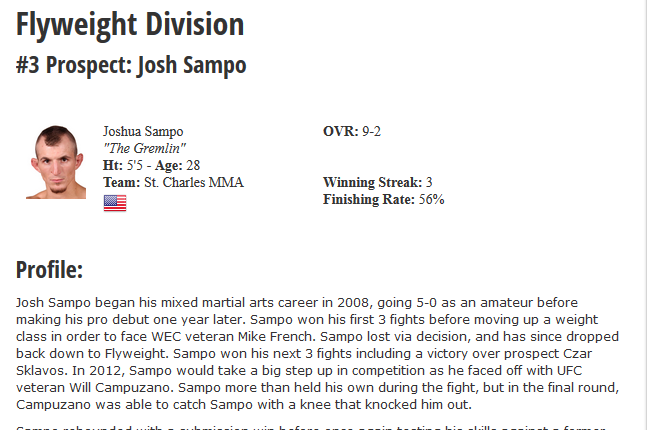 Josh Sampo began his mixed martial arts career in 2008, going 5-0 as an amateur before making his pro debut one year later. Sampo won his first 3 fights before moving up a weight class in order to face WEC veteran Mike French. Sampo lost via decision, and has since dropped back down to Flyweight. Sampo won his next 3 fights including a victory over prospect Czar Sklavos. In 2012, Sampo would take a big step up in competition as he faced off with UFC veteran Will Campuzano. Sampo more than held his own during the fight, but in the final round, Campuzano was able to catch Sampo with a knee that knocked him out.

Sampo rebounded with a submission win before once again testing his skills against a former UFC fighter. Sampo faced off with battle-tested UFC/WEC veteran Antonio Banuelos under the Legacy Fighting Championship banner. In a bit of an upset, Sampo was able to control the pace and neutralize Banuelos’ striking on way to a unanimous decision victory. Sampo followed that up with another impressive victory, this time facing off against Bellator veteran Alexis Vila. Sampo once again pulled off the upset, tapping out Vila in the 5th round with a guillotine. The upset win over Vila earned him the Florida-based Championship Fighting Alliance Flyweight title.

Sampo’s camp, St. Charles MMA, is not home to a bevy of experienced veterans, but is full of rising prospects like UFC Welterweight Lance Benoist, Strikeforce veteran Matt Ricehouse and fellow Flyweight prospect Alptekin Ozkilic. Sampo’s BJJ training is under Rodrigo Vaghi. Unfortunately, it seems that Sampo’s camp has not been doing enough to bring him the attention that should be merited with beating big show veterans like Banuelos and Vila. There is virtually no footage of his fights available to the public.

As mentioned previously, there is not a ton of footage available on Sampo. Luckily, the final results are available, and wins over two veterans like Banuelos and Vila earn quite a bit of respect. From what I was able to gather, Sampo was doing well against Campuzano as well. If Sampo can continue to win and finish fights, he will likely find himself with a UFC roster spot very soon. Sampo has proven to be a well-rounded fighter with good striking and excellent grappling skills. Until there is more footage available of Sampo’s fights, it is too difficult to predict Sampo’s future prospects of competing amongst the elite, but based off what he has done in his last few fights, he seems to be the fastest-rising prospect in the Flyweight Division. 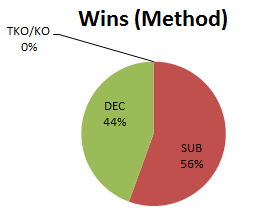