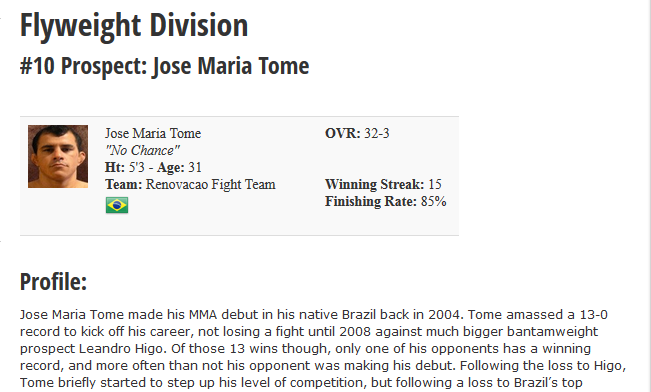 *Jose Maria has been signed by the UFC

Jose Maria Tome made his MMA debut in his native Brazil back in 2004. Tome amassed a 13-0 record to kick off his career, not losing a fight until 2008 against much bigger bantamweight prospect Leandro Higo. Of those 13 wins though, only one of his opponents had a winning record, and more often than not, his opponent was making his debut. After the loss to Higo, Tome briefly started to step up his level of competition, but following a loss to Brazil’s top flyweight and current UFC fighter Jussier Formiga, and another loss suffered against a much larger opponent, Tome began fighting less than stellar competition once again.

His record is extremely padded, even when considering that many of Brazil’s fights go unrecorded on Sherdog, the stunning amount of fighters that Tome has fought whom had virtually no experience would not be permitted under commission watch in the USA.

On the other hand, Tome’s 32-3 record is an eye-catcher, and only 1 of those 3 losses was to a fighter in his own weight class, and that mentioned fighter was the best around. Tome’s record may resemble Renan Barao’s, but only by looks alone. Barao faced much tougher competition throughout his career in Brazil. That could be due to Tome having a tough time finding fights. Remember, the UFC only introduced the Flyweight division 2 years ago, so many flyweight fighters were forced to fight at Bantamweight a few years back if they had any hopes of reaching the WEC.

Tome fights out of one of the top camps in Brazil, Renovacao Fight Team. RFT is home to Bellator veterans Maiquel Falcao, Luis Nogueira, and TUF Brazil 2’s Luiz Dutra. Renovacao has solid contacts with Bellator and the UFC, but Bellator does not have a flyweight division. Thus, Tome’s big opportunity will have to come from the UFC.

Tome is already 31 years old and he is likely in the prime of his career from a physical standpoint. There is a bundle of Brazilian flyweight talent forming and though Tome is still at the top of the pack, they could surpass him as far as being more desirable signees for the UFC.

If Tome were to sign this year with the UFC, I am not sure he has the raw athleticism to compete with the elite of the division. I think he could hold his own with Phil Harris, but the prospects just don’t look great for him coming into the UFC and making a mark. If the UFC creates some depth in their Flyweight Division, Tome would be a welcome addition, just on his record alone. 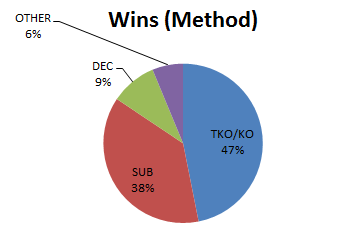