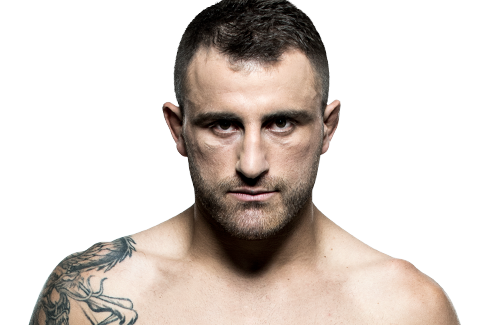 Volkanovski was born in Shellharbour, New South Wales, Australia, of Macedonian and Greek parentage.[9] He started training wrestling at an early age which he won an Australian title when he was 12.[10] He switched his focus to pursue rugby league as the front rower[10] when he was 14[11] where he won Australia Rugby League Mick Cronin Medal in 2010 as Group 7 player with the Warilla Gorillas Rugby League and won the Premiership with them in 2011.[12][13]

Freestyle Fighting Gym trainer Joe Lopez said Volkanovski, who was man of the match in the 2011 Group Seven grand final when Warilla beat Gerringong, started training in MMA at the age of 22[11] and Greco-Roman wrestling to keep fit for rugby league, where he weighed 97 kg (214 lbs).[14]However, he soon realised he had a passion for the sport and wants to go as far as he can.[15] He switched to combat sport in 2012[16] where he fought in the middleweight division as he weighed 210 lbs with his 5′ 6″ frame prior moving the lightweight and featherweight division.[11]

He appeared as a coach in Malaysia Invasion, an amateur MMA reality show.[17] Volkanovski is a good counter striker with powerful overhand right and a fantastic offensive wrestler.[18]

Starting has an amateur, at middleweight, going 4–0 before turning professional. Volkanovski has fought in various MMA organisations in Oceania region in Asia from 2012 to July 2016 prior signed with UFC. He won Pacific Xtreme Combat (PXC) and two times Australian Fighting ChampionshipFeatherweight titles.[20][21] Volkanovski amassed a record of 13–1 with 10 straight wins prior joining the UFC.[22]

Volkanovski made his promotional debut on 26 November 2016 and increased his win streak to 11 with a second-round TKO against Yusuke Kasuya at UFC Fight Night 101.[23][24] He announced at the post fight press conference that he would drop from lightweight to featherweight for his next fight.[25][7]

Volkanovski was expected to face Michel Quiones on 19 February 2017 at UFC Fight Night 105. However, the bout was scrapped after Quinones suffered an injury and no replacement could be found.[26]

Volkanovski returned to Featherweight and faced Mizuto Hirota on 11 June 2017 at UFC Fight Night 110.[27] He won the fight by unanimous decision.[28]

Volkanovski was expected to face Jeremy Kennedy at UFC Fight Night: Werdum vs. Tybura on 19 November 2017 in Sydney, Australia.[29] However, Kennedy pulled out of the fight on 5 October citing a back injury[30] and was replaced by Humberto Bandenay.[31] In November 2017, it was announced that Bandenay would delay his UFC debut at this event due to undisclosed reason,[32] and was replaced by promotional newcomer Shane Young.[33] The bout proceeded at a catchweight at 150 pounds.[34] Volkanovski won the fight via unanimous decision.[35]

Volkanovski is scheduled to face former featherweight champion José Aldo at UFC 237 on May 11, 2019.[43]