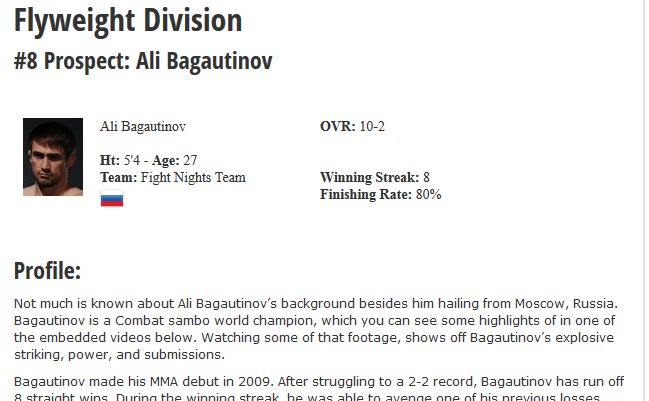 *Ali Bagautinov has been signed by the UFC

Not much is known about Ali Bagautinov’s background besides him hailing from Moscow, Russia. Bagautinov is a Combat sambo world champion, which you can see some highlights of in one of the embedded videos below. Watching some of that footage, shows off Bagautinov’s explosive striking, power, and submissions.

Bagautinov made his MMA debut in 2009. After struggling to a 2-2 record, Bagautinov has run off 8 straight wins. During the winning streak, he was able to avenge one of his previous losses and win the Fight Night Flyweight Championship. Bagautinov has started to step up his competition level as the Fight Nights promotion has sought out some of Europe’s other top flyweight prospects, which Bagautinov has easily defeated. He got the biggest test of his career when he squared off with 30-fight Japanese veteran Seiji Ozuka. Bagautinov won the fight via TKO in just 0:25 seconds.

Bagautinov’s camp, Fight Nights Team, is home to Bellator’s recent signings Vitaly Minakov and Murad Machaev. The promotion, Fight Nights Team, must sponsor the camp in which Bagautinov is the champion of, similar to how KSW runs their ship in Poland. The UFC has not put much effort into tackling the Easter European market, but they are starting to make some recent strides.

Bagautinov could be a force in the UFC flyweight division. He is a Sambo Champion and is very well-rounded. Bellator has struck gold with some of Eastern European prospects they have unearthed. Since Bellator does not have a Flyweight Division, Bagautinov’s big break will have to come from the UFC.

The UFC strangely signed a lesser known Eastern European flyweight in Azamat Gashimov, but that was likely due to his close ties with Khabib Nurmagomedov and Rustam Khabilov. If the UFC is truly looking to make a splash in the Russian market, Bagautinov should be at the top of their list for the Flyweight Division. He is still rough around the edges, but he shows flashes of the aggressive fighting style that could bring some excitement to the division. 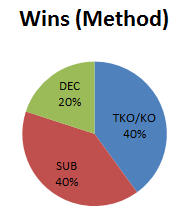