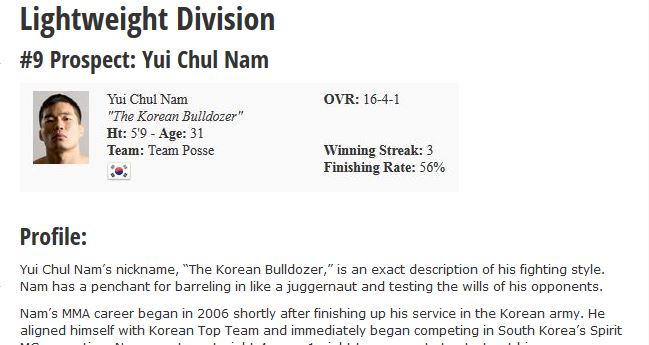 Yui Chul Nam’s nickname, “The Korean Bulldozer,” is an exact description of his fighting style. Nam has a penchant for barreling in like a juggernaut and testing the wills of his opponents.

Nam’s MMA career began in 2006 shortly after finishing up his service in the Korean army. He aligned himself with Korean Top Team and immediately began competing in South Korea’s Spirit MC promotion. Nam won consecutive 4-man, 1-night tournaments to start out his career, which instantly made him one of the top prospects to watch in the region. Following a nearly 2-year hiatus from 2006-2008, Nam returned to Spirit MC, where he once again won a 4-man, 1-night tournament to extend his record to 7-0 overall. Nam won 1 more fight in Spirit MC before departing for the M-1 promotion.

Nam’s M-1 stint did not go as envisioned. He struggled against stiffer competition, losing decisions to Mikhail Malyutin and future Bellator tournament winner Dave Jansen. Nam was able to salvage his stay by defeating future UFC Featherweight Hacran Dias, who had previously been undefeated. After going just 1-2 in the promotion, Nam moved on to Legend FC.

Nam appeared in Legend FC’s inaugural event, fighting to a close draw against Adrian Pang. Nam also began competing in South Korea’s Road FC promotion, fighting and winning via knockout on Road FC’s debut fight card. Nam has since continued to bounce around between both promotions, going 6-2 since 2011. Nam’s only losses during this time was a razor-thin decision against Pang and a submission loss to Legend FC Champion Jadamba Narantungalag.

Nam is currently riding a 3-fight win streak, highlighted by a recent decision win over fellow top prospect Takasuke Kume, which earned Nam the Road FC championship. Their first fight (video 1) was a back and forth war of attrition that could have gone either way. Nam and Kume are set to rematch for the title in October.

Nam initially started training at Korean Top Team, but has since moved his camp to Team Posse. Both camps are considered solid training grounds for Korean fighters, though Korean Top Team has the better pedigree and seems to possess more connections to the UFC. Team Posse is starting to attract some better prospects, but it remains to be seen if they can get some of their fighters to the next level.

Nam is a beast of a fighter. He is gritty, tough, and strong all blended into one. Nam is not the most technical of fighters though. He seems to throw his gameplan right out the window once the fight starts and this had led to a few of his losses. Nam is very fiery type fighter. He likes to get right in the face of his opponents during the pre-fight staredowns and usually comes out firing as soon as the bell rings. In a way this makes him very predictable and at times he gasses out towards the end of the rounds.

Nam is very comparable to his former teammate and recent UFC veteran Dongi Yang. Both are powerhouses and like to use their raw strength and tenacity, rather than play it safe for the scorecards. The problem is, as Yang’s UFC tenure revealed, that once you move up in competition level, your technique becomes so much more important. Nam is great at exploding with combinations, but then he gasses himself out and tries to play the clinch game until he is ready to go “hulk” again. This sort of fighting style does not lend itself towards consistent success, or at least it doesn’t at the UFC level.

The fact remains that Nam is an impressive fighter that could be a real force with some small tweaks to his fighting style. If he were able to improve his submission skills and pace himself just a bit, Nam could certainly be a UFC mainstay. He will have to make these needed changes quickly though as he is already 31 years old, and the door could be closing on his opportunity to fight in the UFC. 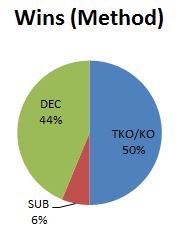