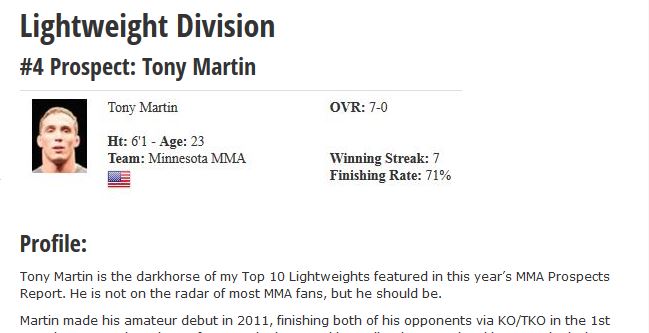 Tony Martin is the darkhorse of my Top 10 Lightweights featured in this year’s MMA Prospects Report. He is not on the radar of most MMA fans, but he should be.

Martin made his amateur debut in 2011, finishing both of his opponents via KO/TKO in the 1st round. He turned pro just a few months later and immediately started racking up submission wins. Martin was primarily fighting in the CFX promotion, which is owned by his coach, UFC veteran Brock Larson. Martin’s record stood at 5-0 overall, with all 5 of his wins coming via submission, though it should be mentioned that the level of his competition was hardly impressive. It wasn’t for a lack of trying though as Martin was finding it extremely difficult to find willing opponents to step in the cage with him.

Luckily, for Martin, he finally got his opportunity to face a familiar name in TUF 8 runner-up Phillipe Nover. Following his dominant 2012 campaign, Martin dropped down to 155 lbs. for his fight with Nover. It was a close fight throughout, but Martin primarily used his wrestling and suffocating top game to grind out a decision victory. The win over Nover was huge for Martin’s career and confidence. Nover was a seasoned veteran and a very dangerous opponent, who was still capable of winning big fights, evidenced by his decision victory over top prospect Darrell Horcher just one fight later.

Martin has since won 1 more fight as he outpointed undefeated prospect Tyler Hellenbrand via unanimous decision.

Martin primarily trains out of Brock Larson’s Get Sum Athletic Compound in Minnesota. He was also thought to have trained out of Minnesota MMA, which is home to some of the state’s top fighters, though I was unable to find any confirmation. Martin’s alliance with Larson is going to benefit him in his long term goal of signing with the UFC or Bellator. Larson is one of the most respected battle-tested fighters in the sport, and if he says Martin is ready for the big leagues, I have a feeling Joe Silva or Sam Caplan will believe him.

Martin’s wrestling has improved drastically over the last couple of years. That is likely a strong indicator of Larson’s influence over Martin’s development. Martin’s career has been steadily handled as he continues to add new skills to his ever-expanding repertoire.

Not much is known about Martin’s background prior to fighting. He’s shown a solid wrestling base in most of his fights, but by all accounts he never wrestled at the college level. He just seems to be a naturally gifted athlete that has worked exceptionally hard at building his skill set.

Martin is a huge Lightweight, standing 6’1. He uses his length extremely well with kicks and a nice left jab. He has developed some very impressive takedown ability and though his top game can be passive at times, he has fast developing submission and ground ‘n’ pound skills. For him to go out and beat Nover via decision, just 6 fights into his career is a big feat. The double-edged sword with that type of win though, is that he’s likely not going to have a long line of opponents willing to face him.

Martin’s question marks mostly revolve around his lack of experience and overall polish as a fighter. His finishing ability is still a bit lacking, though I think he will continue to improve in that area.  Martin is just a bit raw at this point in his career. Currently, he’s a bit limited with his striking and is often hesitant to let his hands go. He could easily build up some confidence by training with some high-level Muay Thai instructors to develop his overall striking and truly use that length to his advantage. We have all seen what a guy like Duane Ludwig has done for Team Alpha Male. If Martin can develop some elbow and knee strikes, he could be a very dangerous fighter.

It is odd to say that Martin is still raw, considering he could probably go into the UFC or Bellator and win fights, but I believe he is just tapping into his full potential. I look at a similarly sized guy like recent UFC signee James Krause, who took years to truly round out his game and become the fighter he is today. Martin has all the makings of being that new breed type of fighter with his size and capability of being well-rounded in all areas.

Martin may not be a world beater just yet, but if he can continue to stay focused and develop his all-around skills at the rate he is currently doing so, don’t be surprised to see Tony Martin on your television screens in the very near future. 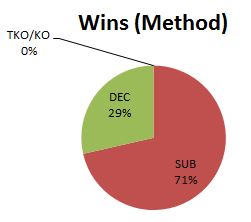